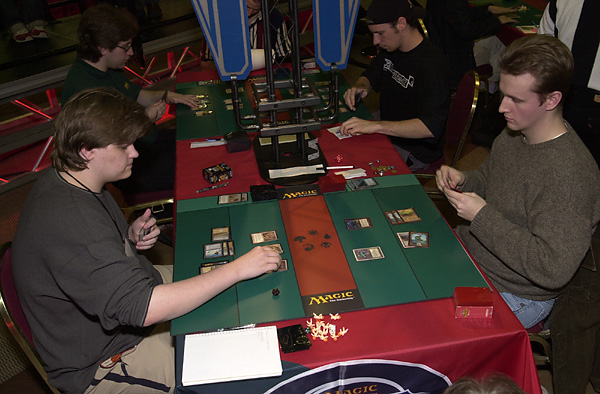 Round 5 saw a rematch of last year's Pro Tour Chicago championship match with Bob Maher once again taking on Brian Davis. Interestingly, the two of them also met yesterday in the second round of this weekend's Masters Series, with Maher winning that match to run his lifetime record to 2-0 against Davis. (The two have never played anywhere other than here in Chicago.) Davis is running a Rebel deck with a splash of blue for Power Sink - a fairly popular choice this weekend. As of Thursday night, it appeared that half the field would be composed of blue/white control decks. Absorbs were selling for $20 each, if you could find them at all. A number of players audibled into blue/white Rebels thinking that turn 1 Ramosian Sergeant plus Power Sink to stop Wrath of God would be very good against a field full of old school control decks. Maher, on the other hand, is playing a rogue deck - mono-blue with aggressive fliers, Ankh of Mishra, and Parallax Tide.

Game 1 showed the explosive power of Maher's deck. Davis played out Lin Sivvi and started building an army while Maher calmly laid a couple of Spiketail Hatchlings and a Chimeric Idol. Davis looked like he was in good shape when he recruited a pair of Defiant Falcons to trade with those Hatchlings and used Parallax Wave to remove the Idols from play for a while. However, Maher had a Parallax card of his own and used his Parallax Tide to remove four of Davis's land from play. With Ankh of Mishra in play, Davis was suddenly staring at 8 damage but he seemed OK. On his next turn, Maher played a second Ankh and then played Washout naming blue. That returned Maher's Tide to his own hand, letting Davis's four land back into play so he would take 16 damage from the 2 Ankhs. Boom! On to game 2.

In game 2, Maher never drew his combo. It took a while for Davis to build up an army because Maher used Withdraw to bounce both Davis's creatures on turn 3, but two Parallax Waves made it impossible for Maher to mount an offense of his own. Wash Out is amazing versus Rebels and could have bought many turns if Maher had ever drawn one, but he didn't and Davis evened the score at 1-1.

Maher was tempted to keep a one land draw in game 3 because it included two Ankhs, a Tide, and a Wash Out, but he knew better. He did take the forbidden peek at his top few cards and saw that no land was coming and he would have been screwed if he had gambled. His 6-card hand was very aggressive: turn 2 Hatchling, turn 3 Rishadan Airship, turn 4 Rishadan Airship. Davis did manage to Power Sink the second Airship, but he was tight on lands and lost both his creatures to a turn 5 Withdraw. Davis' own Adarkar Wastes plus the flying beats plus the bounce was enough and Maher won the match 2-1.

Afterwards Maher stuck out his hand saying "You are a great player, Brian. It's an anomaly that this is 3-0," referring to his record head to head against Davis.