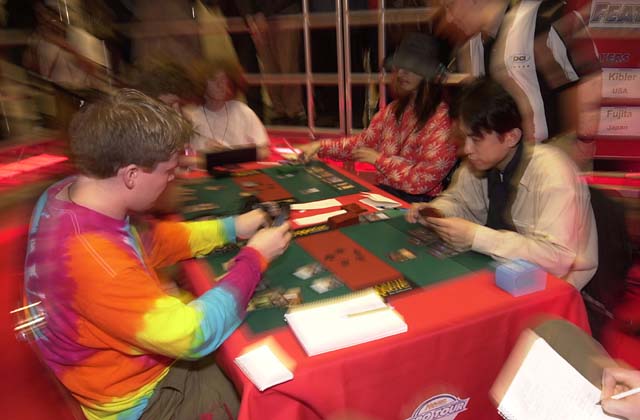 The 5 color playing, Treva and tie-dye shirt wearing Dragon Lord, Brian Kibler, sat shuffling his deck listening to music getting pumped up for his match. His deck, OH MY GOD his deck, is a Collective Restraint style deck but with many changes from the garden variety. He plays Questing Phelddagrif as his kill card as well as Ordered Migration and "four cards with Comma THE in their titles in my sideboard" says Kibler. Fujita played a black/blue Yawgmoth's Agenda control variant with Phyrexian Scuta and Ravenous Rats. Fujita has three Grand Prix Top 8 performances and won Grand Prix Kyoto.

Kibler won the flip and played first. The first 4 turns included each player playing land and Kibler casting Global Ruin on turn 5 trying to destroy 2 of Fujita's lands. Fujita thought about it, and cast Spite on the Global Ruin. Fujita missed his 5th land drop showing why he cast the Spite. At the end of Kibler's next turn, Fujita Recoiled Kibler's swamp, and Kibler discarded a Collective Restraint. Brian replayed the swamp and it was Recoiled again, this time he discarded a Forest. Fujita finally played his fifth land a turn later. Kibler attempted to cast a Fertile Ground but was Prohibited. Fujita had to keep Kibler from gaining access to blue mana. Fujita dropped an Island and cast Addle naming White. He saw Ordered Migration, Fact or Fiction, Allied Strategies, Spite/Malice, and Global Ruin. He thought about it and took the Ordered Migration. Brian finally drew and played an Island. Next turn, he cast Addle again. Kibler thought about it and cast Spite. Then Fujita played Phyrexian Scuta with kicker once Kibler was tapped out. Kibler untapped and cast Allied Strategies for FOUR, played a Swamp and a Star Compass and passed the turn. Fujita attacks putting Kibler to 15 life. 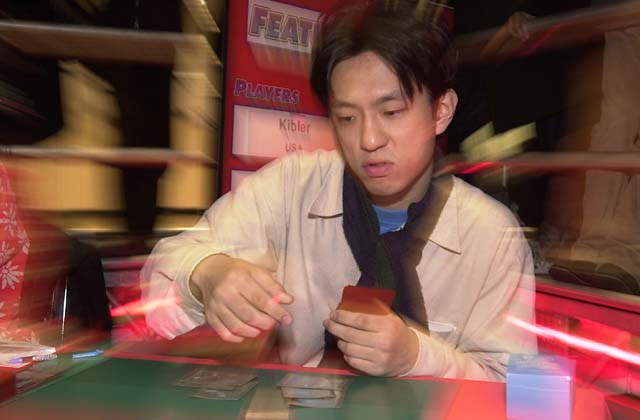 Fujita blocked with his Scuta, Kibler pumped up the Phelddagrif, put damage on the stack and gave it protection from black and red putting Fujita to 19 life. Kibler attempted to cast Fact or Fiction at the end of Fujita's turn and was Undermined back down to 3 life. On his turn, Kibler cast Reviving Vapors, taking Allied Strategies going up to 8 life. Kibler attacked and got his Phelddy blocked by a hippo token. At the end of Fujita's turn, Kibler cast Worldly Council taking a Global Ruin. Kibler attacked putting Fujita to 15 life and thought. He cast a Fertile Ground on an Island, then Fujita Fact or Fictioned at the end of his turn. Fujita took the pile with a Fact or Fiction over the pile with three swamps and a Ravenous Rat. At the end of Fujita's turn, Kibler cast a Fact or Fiction for Ordered Migration, Collective Restraint, and Island over the pile of Global Ruin and Island. Kibler took his turn, attacked putting Fujita to 11 life and then thought. He has 9 mana available a Global Ruin and an Ordered Migration. He cast Global Ruin, Fujita added a blue and let it resolve. Kibler played a land and passed the turn, causing Fujita one point of mana burn. Next turn Brian attacked sending Fujita to 6. Fujita draws his card and scoops.

Fujita appears to sideboard four cards as Kibler sides out his some of his Collective Restraints a Fertile Ground and one other card for four Gainsays, another Ordered Migration and an Ertai, the Corrupted. "I wonder if I'm the only person in this country wearing tie-dye?" said Kibler as he looked around the stand of Japanese onlookers.

Fujita plays keeping a one-land hand with Nightscape Familiar, two Gainsays, Undermine, Spite/Malice and a Swamp. He dropped a turn 2 Familiar after topdecking an Island. Turn 3 he missed a land drop and cast an Addle naming green. He saw Harrow, two Worldly Councils, a Fact or Fiction, Global Ruin and Allied Strategies and took Harrow. Kibler is stuck with only blue and green land. Next turn Fujita attacked, and Addled again naming Blue. He saw Allied Strategies, Global Ruin, two Fact or Fiction, a Gainsay and a Worldly Council. He sees Kibler is stuck with an Island and two Forests for land and takes the Worldly Council.

Next turn, Kibler missed another land drop. Fujita attacked on the next three turns with the familiar while Kibler discards Global Ruin, then the next turn played an Island. On the third turn Fujita played another Familiar after attacking. Brian took the advantage to Fact or Fiction at the end of Fujita's turn after he cast the familiar, but Fujita cast Gainsay. Brian played his 5th land on his turn and cast Allied Strategies for 2, but got Undermined down to 9 life. Kibler drew nothing for the next 4 turns then scooped.

Fujita sat and thought about his sideboard. He might have noticed that Kibler has taken out his Collective Restraints. He looked at a Repulse and Exclude. He took out a Scuta and the Repulse, and put in two Scutas, effectively faking sideboarding in two cards when he only brought it one. 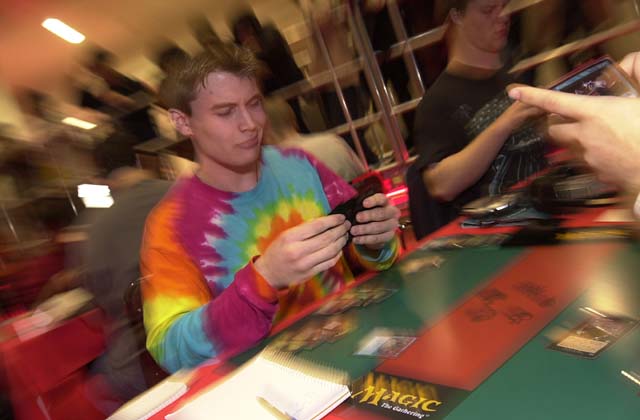 Kibler played first and mulliganed his hand of 6 spells and one plains. While shuffling, he commented on the other Feature Match beside him, where Nakamura Fact or Fictioned a Draco and 4 other cards versus Ben Rubin, "He's only a 9/9." Kibler drew his second hand of 5 spells and a Forest and mulliganed again. He drew his third hand of 5 spells and exclaimed, "Go to four!" He drew his FOURTH hand of four amazing cards. He got two Forests, a Star Compass and a Fact or Fiction. Turn 2 Fujita casts a Nightscape Familiar. Off the top on turn three Kibler gets a Harrow and casts it, sacrificing a Forest to get a Island and a Swamp. Fujita untapped and cast an Addle naming blue. He saw a Forest and a Fact or Fiction. With that Fact or Fiction gone, Kibler's chances of pulling out of the 4 card starting hand look bleak. Kibler played the Forest, and holding the Island he just drew. Fujita cast Ravenous Rat causing him to discard the Island and attacked putting Kibler to 18. Kibler drew a Harrow off top and cast it, getting his other two colors. "At least I have all my colors this game," Kibler commented.

Fujita attacked again putting Kibler to 16 life, then Recoiled his only Island, which went straight to the graveyard because he had no cards in hand. Kibler drew and cast Global Ruin, which resolved and left Fujita with two lands. Fujita dropped a land, attacked putting Kibler to 14. Kibler drew and said go, only to have Fujita Fact or Fiction during his end step for Prohibit, Exclude, and Salt Marsh over the pile of Undermine and Swamp. Fujita attacked sending Kibler to 10. The next turn, he attacked again then cast Addle for blue and saw Fact or Fiction, Ordered Migration, and Allied Strategies and took the Fact or Fiction. Kibler did nothing for the following three turns then shook hands and lost to Nightscape Familiar and Ravenous Rat.

Kibler commented how he had almost pulled that one off, but he had been Addled and lost the Fact or Fiction. Addle and won Fujita both games, by taking the Harrow and Worldly Council in game two and the Fact or Fiction in Game three.