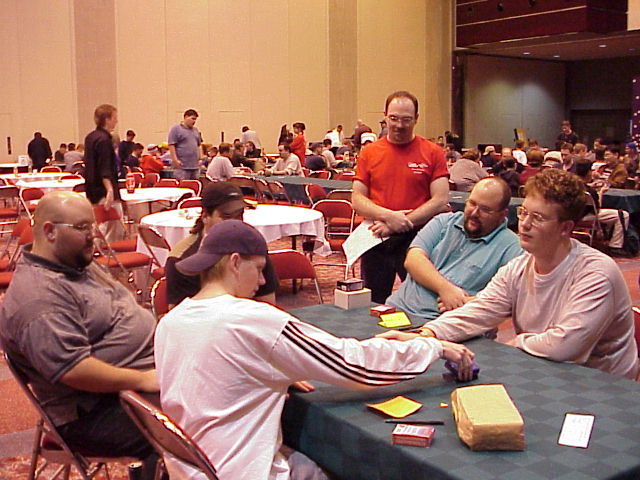 The Big Easy is the home of the first qualifier for Pro Tour Barcelona and the first Grand Prix of the Millennium. It's also home to Harrah's Casino (site of much Grand Prix player gambling), Bourbon Street and the French Quarter (site of much Grand Prix player carousing). Event Horizons, the premier tournament organizer of the Texas-Louisiana area, in addition to this event is also holding an Invitational of sorts (similar to the Magic Invitational) and one of the round's feature matches pitted two of the Invitational participants against each other: Ben Romig and Bryan Hubble. Both players are 4-0, and looking to enter the next round with a loss to give. In fact, Hubble declared that if he won, he would be heading back to his hotel room so that he could sleep through the next two rounds.

Ben and Bryan have previously played each other only once before in sanctioned play, in a Qualifier for Pro Tour London held in Dallas. In that match, Hubble came out the victor; and his words, "smashed (Romig's) face in." This match would eventually turn out no different, in a match I like to call, "Revenge of the Dream Thrush." 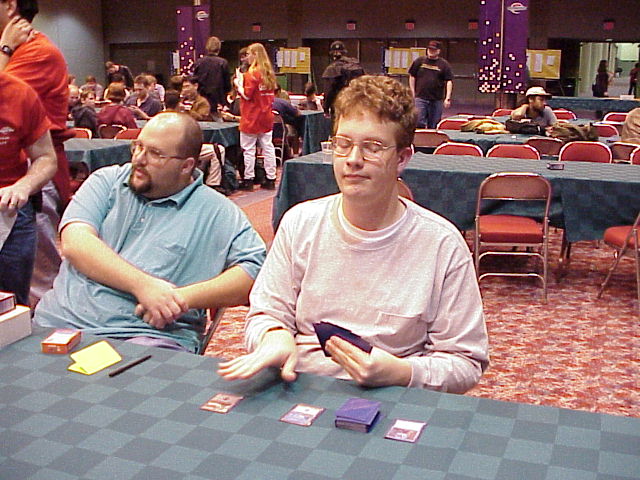 Romig won the coin toss and opted to play first. He opened with Hate Weaver, a card very strong "trickwise" in a Red/Black/Blue deck. Bryan follows it up with Galina's Knight. The players trade early blows, and over the next several turns, Romig dropped a Hooded Kavu and a Mourning onto Hubble's freshly cast Razorfoot Griffin. Hubble also had a Dream Thrush joining the fray. The players weren't messing around, going straight for the jugular. The trash talk was kept low though, as both players were friendly as they traded hits. Bryan dropped a Glimmering Angel, with no mana held back to make it untargetable. With this, Romig saw a chance to do some damage. He returned the Mourning to his hand and cast Do or Die, separating Hubble's creatures into two piles: Dream Thrush and Razorfoot Griffin, and Glimmering Angel with Galina's Knight. Hubble quickly dropped the Dream Thrush and Griffin into the graveyard. Romig wasn't finished yet, though. He used Scorching Lava to burn the Glimmering Angel to the ground. Hubble was left with one lonely permanent to Romig's three. Hubble wasn't dejected though, as his early beats had left Romig at 10 life, and his hand was, as the magic community says, "savage."

On Hubble's next turn he played a Vodalian Zombie and a Benalish Lancer with no kicker. He sent his knight again, and brought Romig to 8. The next turn Romig brought his Hooded Kavu, and pumped it with his Hate Weaver, taking Hubble to 7. He brought the Kavu through by using its "fear" ability, which as mentioned before, combos very well with the Hate Weaver. Hubble, well aware of this plan of attack, set a trap for Romig, waiting with Agonizing Demise in hand. When Romig didn't pump, Hubble still obliterated the hapless Kavu, turning the creature tide back in his favor. There was somewhat of a stall over the next few turns, as Hubble laid an Angel of Mercy and a Vodalian Serpent with kicker, and Romig laid a Trench Wurm and one of his amazing rares - Pyre Zombie. There was some funny business as Romig laid his land, and it fell to Romig as being too strict on himself to mess things up. When he tapped his mana for the Pyre Zombie, he over spent, tapping one extra black into his pool. Hubble (confirming after the match) would have let him take it back, but Romig played tight, and used the extra mana to cast an unnecessary Repulse that left him tapped out and defenseless. Bryan served a few more times and the Angel carried the game for him. 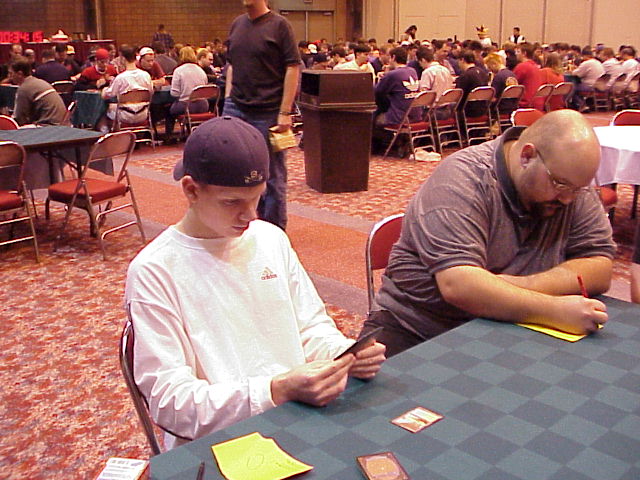 Romig opted to lead off again, and kept his initial hand. Hubble considered a mulligan, but kept his hand, even though it contained only two lands, both of which come into play tapped. By the time Hubble missed his third turn land drop and played Dream Thrush, Romig was laying his 4th land and casting Trench Wurm - which could potentially eat all of Hubble's two lands. Hubble discarded on his turn 4, and Romig, seeing a chance to make the mana screw fatal, used the Trench Wurm's ability to blow up Hubble's Ancient Spring. Hubble, making a great play, used his Dream Thrush to make the Spring an Island, fizzling the Wurm's ability and confounding Romig, who had essentially thrown his turn away. Hubble peeled a land off the top of his deck, and immediately Shackled the Wurm to the ground, not wanting to have to face its 3 power, or its special ability. Romig wasn't drawing any gas, and Hubble's hand - due to lack of land, was full of bombs. He kept getting land off the top of his deck, and kept using the Dream Thrush to make the mana he needed available. Romig drew land after land, as Hubble's draw became golden, with his own Trench Wurm and Vodalian Zombie, with an Agonizing Demise, Repulse, and Atalya. Romig couldn't put up much of a defense, as the Dream Thrush allowed Hubble to use the Demise to kill the Zanam Djinn that Ben played - including paying the kicker. Bryan's terrible, mana light draw was quickly overcome by his quick thinking and the timely play of the little bird that could, Dream Thrush.