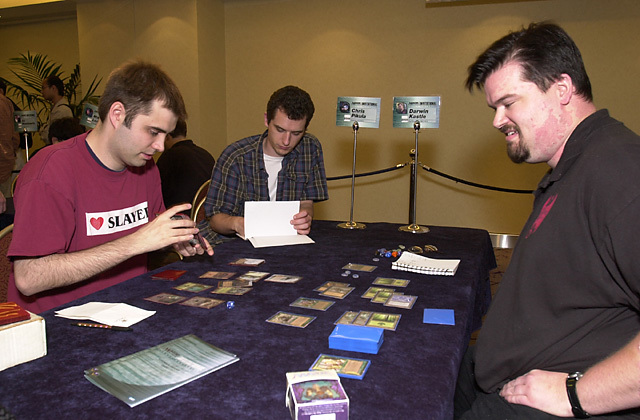 Darwin Kastle, with an unspectacular 1-3 record, brought his Ice Age, Legacy, Exodus to the table against Chris "Always Cheerful" Pikula and his mirror Ice Age, Legacy, Exodus deck. Chris immediately began complaining about how unfair it was to have to play the "master of survival" in the mirror match-up. Chris kept up a constant barrage of self-recrimination and complaints as he continued the match, making for an entertaining battle. As Chris put it - "Darwin knows how to play this deck - I don't."

Both players played a turn two Survival and Chris followed it up with a Yavimaya Granger while Darwin missed a land drop. Chris then played an Avalanche Rider to give him a huge mana advantage, but the game inexplicably began turning around. Using a Llanowar Elf and a Yavimaya Granger of his own, Darwin managed to recover his board and dominate the match. Pikula couldn't quite figure out how this had happened and began ranting that despite having a mana-screwed opponent, he still was somehow losing - and he didn't know why!

Darwin confidently played out the rest of the game, searching out a Plague Lord and then an Ashen Ghoul. Chris, following Darwin's lead, got a Plaguelord of his own but Darwin sed a Ghitu Slinger and his own Plaguelord to deal with it quickly. Throughout the match, Darwin kept counting the cards in both player's graveyards, which Chris didn't understand. But everything became apparent when Darwin searched out and played a 24/25 Lhurgoyf. Chris did have the answer in the form of a Bone Shredder as he announced, "I'm going to bone your Lhurgoyf." Between Deranged Hermit and the Plague Lord, however, Darwin removed all the creatures Chris played and beat him down with an Ashen Ghoul.

After spending ten minutes trying to figure out what to sideboard and asking spectators for advice, Chris began the second game with two Avalanche Riders, Spike Weaver, Disenchant and three land. Darwin played a Llanowar elf on the third turn and Chris began the beating with a turn four Rider. Darwin played a red mana source and declared that he was about to make his favorite play as he cast an Avalanche Rider of his own to destroy Chris's fourth mana so he can't pay echo.

Chris played two elves on turn five as Darwin paid echo. They each played a variety of creatures and creature-kill in attempt to get control but Chris was unable to cast the two Avalanche Riders in his hand after Darwin destroyed his Sulfurous Springs. Darwin's card advantage and skill advantage allowed him to attack Chris with 2/2 creatures over and over until Chris was dead. As Chris lost he revealed his sideboard where he had taken out the Mountain he desperately needed to cast the Riders in his hand.

Chris's final comment on the game - "I've never been so outplayed in a match in my entire life".