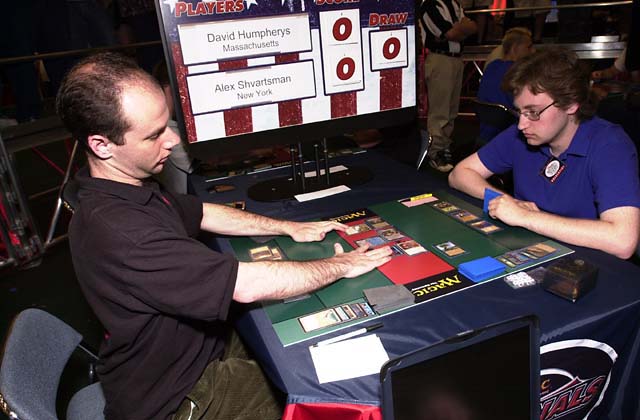 This match was but another chapter in the history of the Neutral Ground/Your Move Games rivalry. The competition between these two stores has really heated up in the past year or so with the invention of the Grudge Match. In this tournament series, the winners of separate tournaments held at each respective store faced off for a cash prize.

In the two Grudge Match finals held so far, Neutral Ground has emerged victorious. As a result, bragging rights have become an important part of Northeast Magic. New England players often travel down to New York PTQs and visa versa, all in the name of "stealing a spot" in enemy territory. This rivalry becomes even more intriguing in a high profile event, where big money is on the line. Neutral Ground regulars Zvi Mowshowitz and Michael Pustilnik have both won Pro Tours this season, further adding to the perceived dominance of the game store on tournament Magic.

Dave won the die roll, and decided to draw first. Alex got off to a good start with a turn two Spirit Weaver, which dealt two points on damage on the next turn. Alex then played a Quirion Explorer and ended his turn, while Humpherys played Worldly Council. Dave untapped, and played a Drake-Skull Cameo. Humpherys still had no creatures, and Alex's team came through for three damage. Alex then increased his mana production with a Utopia Tree, and sent the turn over. Humpherys answered by playing his first creature of the game in Sea Snidd.

Alex played Sparkcaster, bouncing back Quirion Explorer. He then replayed it, and ended his turn. Humpherys played the first flying creature of the game in Aurora Griffin, and played a great answer to Sparkcaster by summoning Galina's Knight. Alex then untapped, and played Verduran Emissary with kicker to take out Drake-Skull Cameo, which was Humpherys's only source of black mana.

The Skies were now open for the Griffin, and it flew over the playing field to deal two damage. Humpherys continued to develop his board position by playing a Benalish Trapper. Alex tapped four mana on his turn and played Magma Burst with kicker, killing off Sea Snidd and Benalish Trapper. This left Humpherys with a Griffin and Knight left, and only the Knight was available to block. This gave Alex the green light, and he attacked with all of his creatures. Humpherys blocked the Quirion Explorer with Galina's Knight, and took nine damage, going down to five.

Dave untapped, and stabilized the ground with a kicked Prison Barricade and a Stormscape Apprentice. After some thought, he decided not to attack with the Griffin, and ended his turn. Alex then played Canopy Surge with kicker, taking out Dave's Griffin and bringing him down to one life point. One again, Alex attacked with all his creatures. The Apprentice blocked the Spirit Weaver, Galina's Knight blocked Sparkcaster, and Prison Barricade blocked Verduran Emissary.

Although he was at one, Humpherys seemed to regain board control on the following turn, as he played Voice of All naming White, followed up by Obsidian Acolyte. At this point, Alex had one card in his hand, and Humpherys had none. Alex then got a step ahead in the creature numbers race by playing a kicked Prison Barricade. Keep in mind that Humpherys was at one life point, so any unblocked creature that dealt damage would end the game. Alex found such a creature next turn when he played Treva, the Renewer, but unfortunately it was merely just another creature due to the Voice of All. Humpherys was clearly thinking about Treva when he played the Voice a few turns prior, since Alex had no White creatures out at the time.

Alex then played Hobble on Galina's Knight, which drew him into Lashknife Barrier. Play slowed down for the next few turns, with both players drawing and ending their turns without doing much except playing the occasional land. Eventually Humpherys played Razorfoot Griffin, and then a Benalish Heralds on the next turn. Alex played a Kavu Climber, and continued to present the threat in numbers to Dave's dangerous life total. A Sulam Djinn followed a turn later. Still, the Heralds was active, and helped Humpherys draw into more creatures.

In fact, a kicked Vodalian Serpent came into play the turn after Humpherys activated the Heralds for the first time. With the game at such a stalemate, it seemed that Alex was waiting to draw a burn spell, or a Gating creature to bounce back Sparkcaster. After thinking, he attacked with Sulam Djinn, which was at its full 6/6 state. Humpherys blocked with Serpent and two Prison Barricades, and Alex played Gaea's Might on the Djinn to give it +4/+4. This allowed it to kill off the Serpent and a Prison Barricade, plus the Djinn stayed alive. 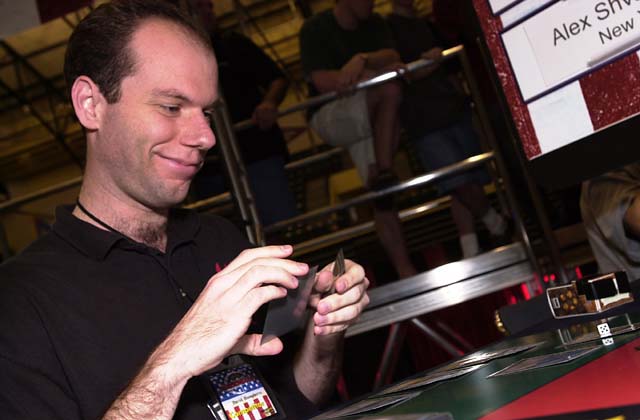 At the end of the turn, Humpherys cast Fact or Fiction, which was potentially dangerous considering that he did not have much of a library left. The cards revealed were Island, Plains, Faerie Squadron, Probe and Metathran Transport. Alex split them into Probe, Transport and Plains, Island, Squadron, and Humpherys took the Squadron pile. He played an Aurora Griffin on his turn, said go. After some thought, Alex attacked with all of his creatures, including Utopia Tree. Humpherys did not have enough blockers, and Alex was finally able to get through that last point of damage to win the first game

Humpherys decided to play first this game. Alex accelerated his mana on turn two by playing a Quirion Elves on blue, and served with it on the following turn. At four mana, Humpherys played his first creature, Aurora Griffin. Alex served yet again with the Elves, and Humpherys did not block, taking another point of damage. The Griffin flew over for two points of damage, and Humpherys increased his aerial army with Razorfoot Griffin, which was killed with Agonizing Demise at the end of the turn. Alex then tapped out to play Steel Leaf Paladin, bouncing Quirion Elves.

Aurora Griffin served again, and Humpherys played a Sea Snidd. Alex attacked with the Paladin, which came through for four damage. He then replayed Quirion Elves, and bounced it by playing Sparkcaster. After some thought, Humpherys dealt two damage with the Griffin, and played a Galina's Knight. Alex made combat a much easier concept to swallow by playing Lashknife Barrier, which allowed Steel Leaf Paladin to attack unblocked. The somewhat disoriented Quirion Elves then came back into play for the third time.

With the ground securely locked up, Humpherys flew over the Griffin again, and played Silver Drake, bouncing the Griffin. Alex untapped and played Wings of Hope on Sparkcaster, but Humpherys responded by making his swamp into and island with Sea Snidd, and casting Confound. Regardless, Alex attacked again with all of his creatures. Galina's Knight blocked Sparkcaster, and Silver Drake blocked Quirion Elves, which became a 5/5 thanks to Gaea's Might. Humpherys then attacked with Sea Snidd, which came through unblocked. He played Dream Thrush and the Aurora Griffin that had been bounced last turn.

Alex attacked once again with the Paladin, and the Dream Thrush chump blocked it. Humpherys counter-attacked with Aurora Griffin and Galina's Knight, bringing Alex down to five, which was also Dave's life total. He then played Marsh Crocodile, which forced both players to discard lands. The Knight was bounced, and immediately replayed. Once again, Alex sent in just the Paladin. With things getting a little more desperate, Humpherys chump blocked with Sea Snidd.

Humpherys was at a loss for options, and attacked with all of his creatures. Quirion Elves blocked Galina's Knight, and Sparkcaster blocked the Marsh Crocodile and became bigger thanks to Aggressive Urge. Aurora Griffin got through without a problem, and brought Alex down to three. Humpherys then stabilized the ground with Tidal Visionary and Benalish Heralds. Looking at seven minutes left in the round, and the Griffin looming overhead, Alex scooped and shuffled quickly into the third game.

Humpherys played a turn one Faerie Squadron, while Alex accelerated his mana curve with Quirion Elves. Dave then bounced back the Squadron with Cavern Harpy, and attacked with it on the following turn. The Elves attacked back, and the Harpy continued to serve through the air. Humpherys then replayed the Faerie Squadron without kicker, and ended his turn. Alex responded by playing the first large creature of the matchup, Steel Leaf Paladin. Regardless, the Harpy was still able to attack for damage through the empty air. Humpherys added to his aerial assault with Silver Drake, and sent the turn over. 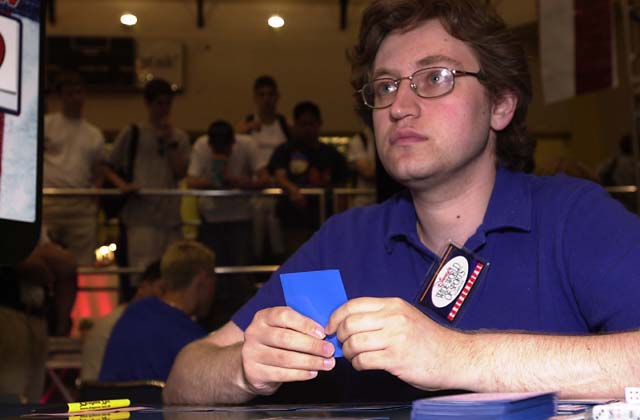 Steel Leaf Paladin counterattacked on the following turn, dealing four damage. Alex continued to improve his board position with Lashknife Barrier, and followed it up with Quirion Elves. Dave's flying team swung for another five damage, bringing Alex down to nine. Yet another flying creature hit the table, as Humpherys finally played the Faerie Squadron with kicker. Alex had the answer on his turn, as he played Agonizing Demise with kicker on the Squadron, and attacked with the Paladin, bringing Humpherys down to nine.

At this point time was called, which allowed the players to play at a slower pace than their previously rapid rate. Humpherys thought for a while, and attacked with Harpy and Drake, bringing Alex down to four. He then played Stormscape Apprentice and an Aurora Griffin. This put Alex into a bad position, because he had no fliers and was facing death from above on the following turn. After some thought, Alex attacked with all of his creatures. Humpherys chumped with the Apprentice, bringing him down to four. Alex then played Voice of All, naming White. Humpherys attacked with everything on the next turn, dealing lethal damage.