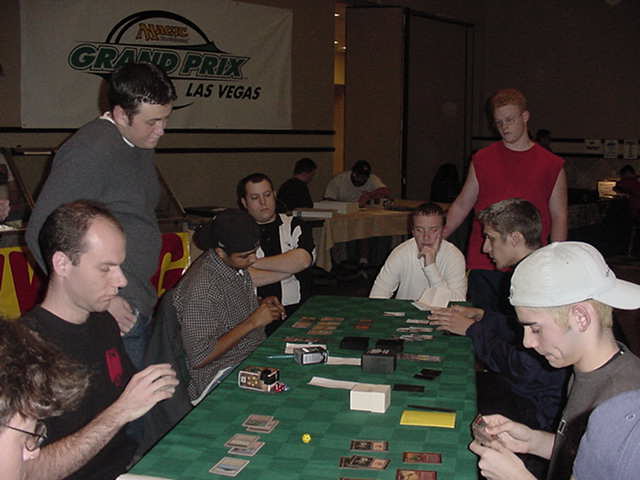 At Grand Prix Denver, Brett Shears powered his way through Darwin Kastle and Danny Mandel, (Humpherys' Your Move Games teammates) on his way to the Championship. Dave Humpherys is now out to break his streak against YMG and continue his 4-0 record to this point today.

Humpherys is playing a 4 Color Control deck of his own design, breaking away from the reanimator strategy that carried him to the Top Four in New Orleans. Shears is running Sligh, an unusual choice given the current metagame and its notorious inability to handle Trix, but one that may catch enough people off guard to propel him to victory if he can avoid decks packing Illusions. He also is trying out something quite new for Sligh, Reckless Charge. Price of Progress and its successful resolution will be the key to the match-up. 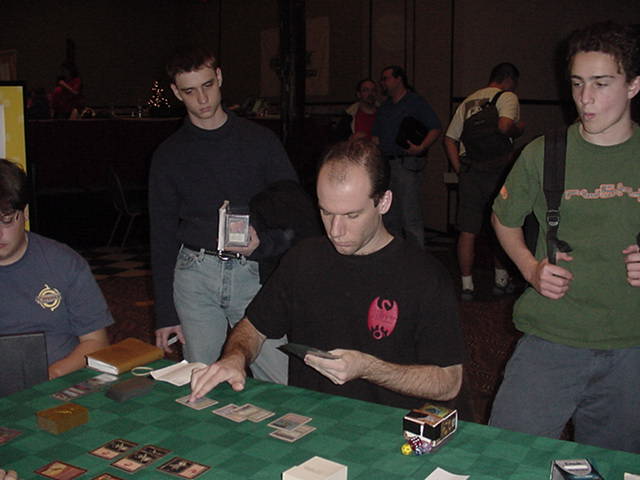 Shears kicks off with a slow start (a 3rd turn Goblin Patrol is his first play) giving Humpherys plenty of time to establish his mana base, and Fact or Fiction up an Elephant. Basically stomping all over any puny goblins. Another Fact or Fiction puts Humpherys up nearly eight cards on Shears, and with a pair of very beefy elephants held in reserve. A third Fact or Fiction from Humpherys a couple of turns later made the game academic, barring the elephants and a late-to-the-party Morphling, turning Shears' force of goblins into road kill, and Shears into a drive-by victim.

Both men are quiet and serious heading into the second round. Shears looks focused and perhaps a little nervous that his deck got off to such a slow start, while Humpherys looks very relaxed, more at ease in the featured match pit than Shears or this reporter. 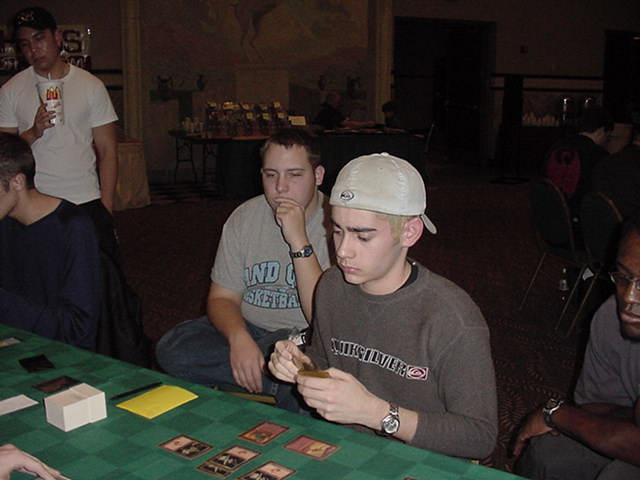 Shears tried to get off to a fast start with a turn one pup, but it stumbled over a Force of Will, and try as he might, Shears had nothing to follow it up. By the end of the fourth turn, Shears board consisted of mountains and nothing. Humpherys also consisted of lands and nothing, but unlike Shears, he seemed quite satisfied with that. Shears tried to battle back with a reckless army of charging goblins, but a well-timed Disrupt put the breaks to his goblins. Hump had taken an early beating, but a pair of Elephants suddenly turned up to guard his back. With six non-basics in play for Humpherys, Price of Progress loomed as a constant threat. One had already been countered, but the specter of another (and Hump's less than stellar hand of a single Swords to Plowshares) kept him on the edge of his seat while the elephants brought the beats. Shears needed to top deck, but it just brought him another mountain.