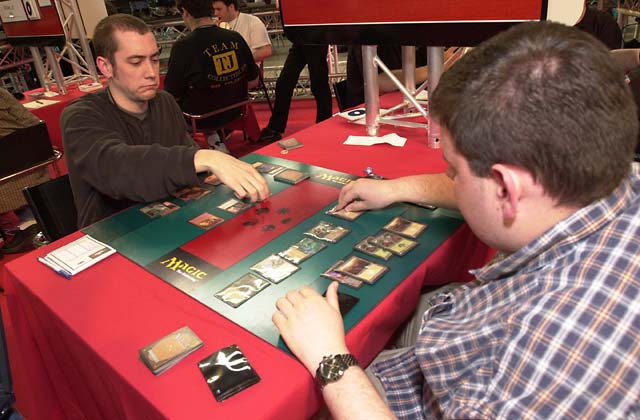 Dave Price and Steve O'Mahoney-Schwartz have two Pro Tour LA championships and five Invitational appearances between them. They've each been regulars on the Tour since its inception. They're each had 3-1 records at their first draft tables and they had PT LA 2 champion Tomi Hovi between them for their second draft. Price drafted black-red (his favorite) and Steve went green-white from the very first pack, guessing that those colors would be under-drafted. He was right and was rewarded with 3rd and 5th pick Armadillo Cloaks plus 4th pick Nemata, Grove Guardian. More extensive coverage of the draft is available. 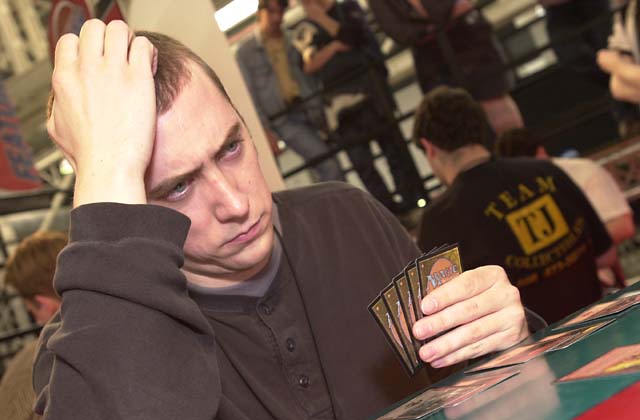 Steve started game 1 with Sunscape Apprentice, Quirion Explorer, and Rampant Elephant. Price played a turn 3 Caldera Kavu, gambling that Steve would not have the forest he needed to activate the Lure ability of the Elephant and use his Apprentice to pump it up to 3/3. His gamble worked out, the Kavu wasn't forced to block, and Price then drew the swamp he needed to remove the elephant with Exotic Curse. That wasn't the end to Price's troubles, though. Once Steve drew his second forest the fatties started coming out to play. Kavu Climber and Jade Leech backed up by both the white and green apprentices were more than Price could deal with. Price tried to slow the tied by Soul Burning away Thornscape Familiar, but Steve saved it with Fleetfoot Panther. Then Agonizing Demise (with kicker) quickly put Price out of his misery. OMS also had Magma Burst in his hand, but had no need to use it in game 1.

Price had mana problems in game 2. He stopped playing lands with just two swamps on the table, attempted to trade his Nightscape Familiar for a Sunscape Apprentice but got just an Aggressive Urge instead, and was soon forced to start 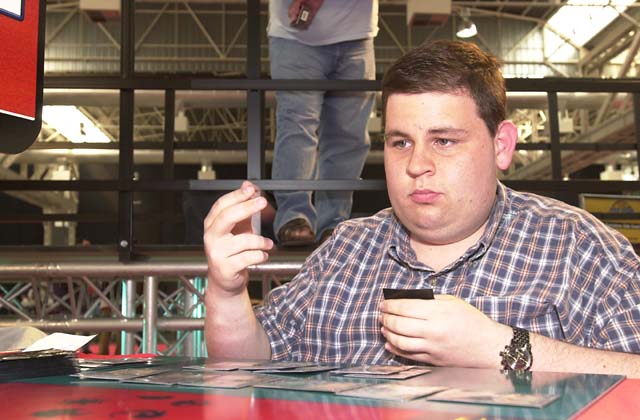