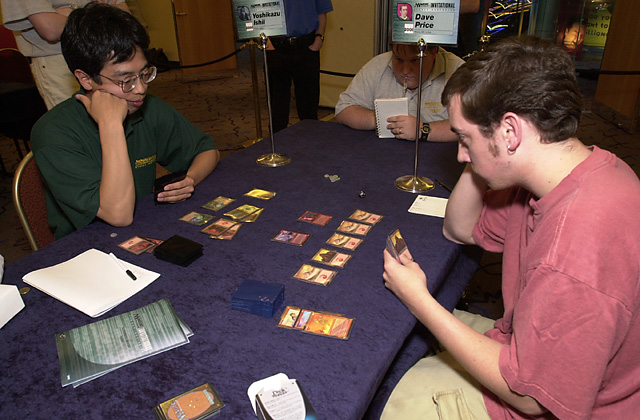 Not much was expected of either of these players coming into the event, but when Dave Price and Kazuhiro Ishii sat down for a round 5 feature match they both had 3-1 records and were tied for third with Noah Boeken. Ishii was running a very cool Fires of Yavimaya deck using Invasion, Nemesis, and Destiny. He basically took the current Standard Fires deck and added Masticore and Powder Keg. Price is running the most popular deck in the field - Ancient Tombs, Jackal Pups, Stone Rains, Pillages, Avalanche Riders, Balduvian Hordes, and assorted direct damage spells from Tempest, Legacy, and Alliances.

In game 1, Price played a Mogg Fanatic and then a turn 3 Stone Rain. He debated for a few seconds about whether to blow up Ishii's Mountain or Forest and decided on the Forest. That decision turned out to win him the game as Ishii never found the second green mana he needed to cast the two Blastoderms in his hand. Price played out a pair of Worlds '99 commemorative foil Balduvian Hordes and those bad boys dealt a lot of damage quite quickly.

Ishii boarded in his anti-Ponza tech for game 2 - Elfhame Sanctuary and Simoon. Turn 2 Elfhame Sanctuary made game 2 very painful for Dave Price. Ishii activated it 4 times to go get land from his deck and that undid all of Price's land destruction. Two Blastoderms and a Saproling Burst cleaned up in short order.

Ishii had the Sanctuary again on turn 2 of game 3, but Price had a much quicker beatdown. He played out Fireslinger and a pair of Jackal Pups and then played for tempo. Ishii's Sanctuary meant that Price's two Stone Rains plus Pillage wouldn't have a long term effect on the game, so Price saw that he had to play for the short game. He used those three land destruction spells to prevent Ishii from building up mana while those Pups kept coming over. Ishii kept knocking his deck, hoping to draw Simoon, but he couldn't draw it and those Pups finished him off before he ever built up to 4 mana.