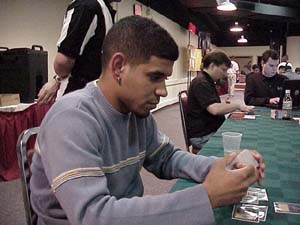 Dave Williams earned his reputation as a top player by traveling around to every Grand Prix he could possibly get to. Two weeks ago at Pro Tour Tokyo, he finally shook off the label "best player without a Top 8" and now the Masters competitor seems to be on top of his game. He's had some bad luck at Invasion block Limited Grand Prixs, finishing between 65th and 70th (and thus failing to advance to day 2 because of his tiebreakers) five times including last weekend in Gotenburg. His opponent in round 5 was Dan Clegg - another PT regular who seems to have kicked his game up a notch this season.

Neither player did anything until Williams played a turn 4 Trench Wurm. Clegg answered back with Quirion Trailblazer, getting a fourth basic land type into play (he had everything except a Swamp). Williams whistled in mock admiration as Clegg returned the Trailblazer with his Horned Kavu so he could go get land type number 5. The 3/4 Kavu was what really mattered, though, because it did a nice job of holding off Williams' Trench Wurm and Phyrexian Bloodstock. Williams just looked morose while he waited for a mountain so he could start playing the five red creatures that had accumulated in his hand. Williams soon got his mountain, but by then Clegg had Armadillo Cloak on Aurora Griffin. 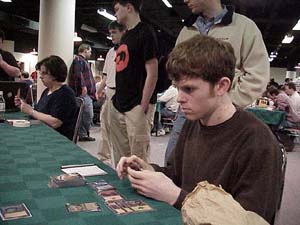 Thunderscape Battlemage with both kickers looked really good - it destroyed the Cloak and knocked both Gerrard's Command and Benalish Lancer out of Clegg's hand. However, the one card Clegg kept was Allied Strategies! When Phyrexian Scuta came off the top of Clegg's deck, he no longer even needed to play the Strategies. Going the five-color green route when he built his sealed deck allowed Clegg to play with outstanding cards. When Williams had a hiccup in his mana development (no mountain), he was unable to pounce on Clegg early before he set up his domain and it's really hard to beat a domain deck in the late game.

Game 2 also started slowly and once again Clegg had time to set up his manabase. Eventually, Clegg put Armadillo Cloak on Voracious Cobra and Williams had no answer. Williams tried racing and he was dealing damage slightly faster than Clegg, but with Clegg gaining four points per turn, Williams just couldn't keep up. A surprise Fleetfoot Panther from Clegg picked off Williams' Yavimaya Barbarian and suddenly the race wasn't remotely close. Tribal Flames for 4 ended things a turn early.