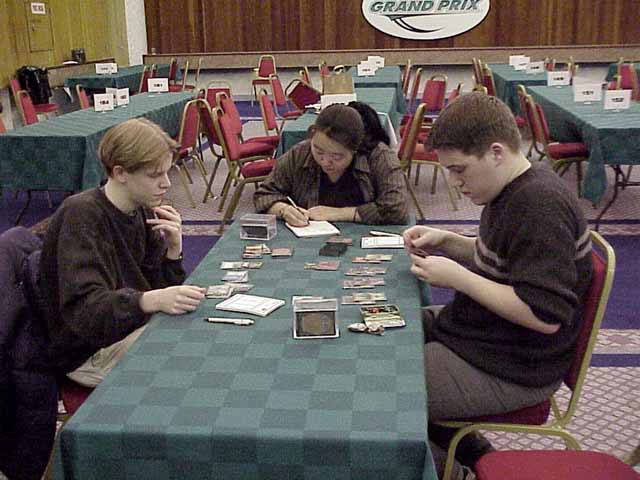 Two of the top German players were pitted against each other in the fifth round. 1999 World Champion and three times Grand Prix Champion Kai Budde faced the young and talented 2000 World Championship top 8 finisher Dominik Hothow, or "Billy the Kid" as he doesn't like to be called. The two of them had playtested their decks against each other several times as they both had three byes, but none of the decks seemed to beat the other one consistently.

Budde won the die roll and chose to let Billy play, and Billy got a good start, playing a turn two Benalish Trapper and a third turn Stormscape Apprentice. Kai Zapped the Apprentice, and after Billy had summoned a Dream Thrush, he dropped an Ancient Kavu and then a Serpentine Kavu. Billy didn't like all the big creatures on the other side of the table. He let the Kavu Mourn for a while and cast a Crosis's Attendant, while keeping the Serpentine Kavu at bay with his Trapper.

Kai had another big creature in his deck though. He summoned a Goham Djinn, but it was only 3/3 as black was the most common colour. So when Billy attacked with his Crosis's Attendant, he chose to trade creatures. During his own turn, he dropped Reckless Assault, finally getting rid of the Dream Thrush that had been hitting him for a while and the annoying Benalish Trapper. Kai then started attacking with his two Kavus, but Billy didn't like that, so he sent the Serpentine Kavu into an Agonizing Demise.

Kai continued to cast creatures. He dropped a Nomadic Elf, a Phyrexian Slayer and the Serpentine Kavu also recovered from its death, but that didn't really help much when Billy slapped his Treva, the Renewer on the table. So all Kai could do was to attack with his Slayer and then holding the rest back.

Billy drew into his Benalish Heralds, and he then cast a Worldly Counsel to dig deeper into his deck while Kai, at three life only, cast a Pincer Spiders with kicker. Kai then traded the Slayer for a Mourning when the dragon attacked again, and things looked bad for him when his Serpentine Kavu was Shackled down. And when Billy drew and said "Boomerang", they both started scooping. However, the feature match reporter didn't catch which 'boomerang' it was, and asked - and Billy suddenly realized that it wasn't a boomerang spell at all, but an Exclude. So the two players had to put their permanents back on the table to continue the match.

Nothing much happened, though. Billy attacked with his dragon, Kai blocked with his Spider and then he scooped - this time for real.

Kai wanted Billy to go first in the second game as well, and Billy dropped a turn one Stormscape Apprentice that attacked for a couple of turns. Kai tried to cast a Hooded Kavu during his third turn, but Billy had the Exclude - not a boomerang - and countered it. Another Kavu came into play during Kai's fourth turn though, an Ancient one. But Billy had a Phyrexian Reaper that halted the attack.

Both players cast various creatures over the following turns. Kai got out his kicked-up Pincer Spider, but Billy had an even bigger critter - a kicked-up Vodalian Serpent. Kai then cast a Shivan Zombie before Billy dropped one of his really good creatures - a Benalish Heralds. So he started drawing an extra card a turn while pinging Kai with the Stormscape Apprentice.

Kai then drew his Reckless Assault. He dropped it, killed the Apprentice and then killed the Reaper after first chumping it with his Shivan Zombie. Meanwhile, Billy Shackled the Ancient Kavu, and then Kai summoned his Goham Djinn.

The Goham Djinn didn't make a big difference though. Kai was at eight after taking damage from Billy's various creatures, and after drawing a lot of cards thanks to the Benalish Heralds, Billy slapped Wings of Hope on a Crosis's Attendant he had played and attacked for four. He then sacrificed the Attendant which gave him enough mana to Soul Burn Kai for the last four damage.