ustralia and the United States were among the favorites to make a good run at this year's World Magic Cup, and they haven't disappointed. Starting out with a perfect 4-0 record, only one of them would emerge undefeated and in strong position for Saturday's pool play.

Though Team USA's Captain, Josh Utter-Leyton had to devote his time to preparing for the World Championship (preparation that paid off with at least a Top 4 finish), his teammates Jason Gulevich, Joe Spanier, and Daniel Cecchetti went to work testing Sealed builds for M14 and Modern Masters. They explained that they didn't have to do much work for Standard, since they knew from Utter-Leyton's playtesting that they wanted a Jund deck and a Blue-White Control deck, and it was just a matter of finding a third. They settled on Mono-Red.

Australia's Captain Justin Cheung has been here before, heading the 2008 team to a finals appearance at Worlds. He said that he was lucky that two of his teammates (Sasha Markovic and Matt Anderson) lived relatively close by so that they could do their playtesting in person. Matt Anderson lived in far-off Melbourne, and then was busy with a trip to Europe, so he kept up with their work through discussions over Skype and Facebook. Like the USA, they were most concerned about finding a third deck, since they knew early on they wanted both Jund and Aristocrats. They tried versions of Bant Hexproof, Blue-White Control, Esper, but ultimately they liked their Bant Tokens list the best. "It tested well," said Cheung, "we liked the surprise factor, and we thought people would prepare against Bant Hexproof, and the cards that are good against that are much worse against this." 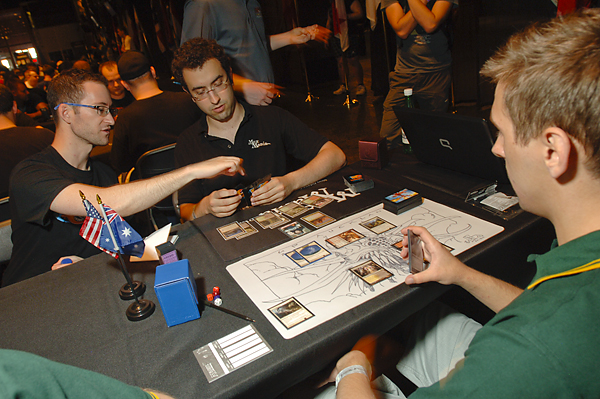 Team USA had quite the captain at the helm, with 2012-2013 Player of the Year Josh Utter-Leyton offering coaching where needed.

It looked bad for Spanier (playing Blue-White Control) early when he missed his land drop on his third turn. Luckily, Cheung's Jund deck had served up a slow draw. He had only an Ooze for early offense.

Jund was slow off the blocks for Cecchetti too, with only a turn three Underworld Connections, not good against Markovic opening of Doomed Traveler and Boros Reckoner from his Aristocrats deck.

In the center seat, however, nothing was slow. Both players had three creatures in play by turn two! Gulevich's Mono-Red had the upper hand thanks to Lightning Mauler speeding things up. He and Anderson traded haymaker attack steps, but Gulevich had the last laugh with a Searing Spear and enough mana left over to pay for the Spell Rupture that Anderson had been sitting on.

The good news continued for Team USA as Spanier drew out of his predicament. Still, Cheung taxed his resources and had him empty-handed. Spanier, sitting on eight mana, flipped Ætherling into play. Cheung's Bonfire of the Damned Left him at two. Spanier's deck wasn't about to give up. This time it gave him Jace, Architect of Thought, and when he activated the minus ability, there was the Sphinx's Revelation he needed, smiling back at him. Cheung failed to draw burn, and that was essentially that. 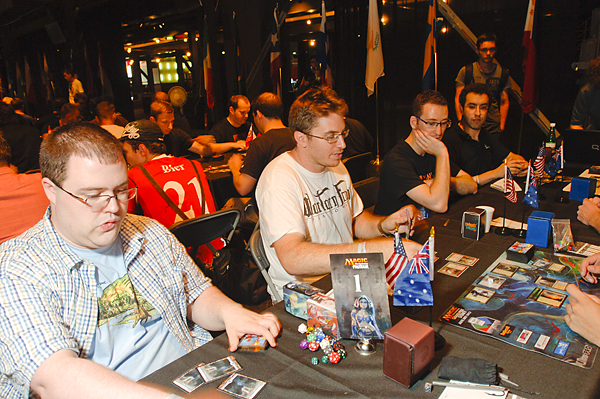 Joe Spanier's Revelation off the top bailed him out of an unlucky start.

Finally, some good news from the Australians, as Markovic turned to Anderson for a high-five. "I sacked it! Act off the top and exactly enough mana!" 13 redirected damage from Boros Reckoner had stolen the game that Cecchetti had started to take over. Australia was on the board.

Cheung got his revenge on Spanier in the second game. He opened with Scavenging Ooze and Huntmaster of the Fells on the play, and Spanier had no Supreme Verdict, only Planar Cleansing. By the time he got around to casting it, Ruric Thar, the Unbowed had joined the party, and Spanier was left at 1 life. "You can show me if I'm dead," he said with a shrug. Cheung flashed the Rakdos's Return in hand.

Anderson took full advantage of being on the play, spilling out Young Wolf, Cloudfin Raptor, and Geist of Saint Traft. Gulevich tried sticking his 2/2 creatures in front of it, but Anderson had Selesnya Charm for the save. Druid's Deliverance the following attack got him an angel token permanently, and when that got enchanted with Unflinching Courage, Gulevich was ready for Game 3.

Cheung was struggling in his Game 3, stuck on three land. He found a fourth not too long after, and Slaughter Games'd away Spanier's Ætherlings. Unfortunately Spanier had Restoration Angels and Clone still in his deck, along with Moorland Haunt. Worse, his hand was full of countermagic. Cheung settled in for a long grind.

Cecchetti was up against the wall in Game 2. He had weathered an early assault from Anderson, barely, but was left with just a beast token at ten life, and facing a 5/2 Falkenrath Aristocrat. He drew a timely Thragtusk, but Anderson was not about to be outdone in the topdeck department. He drew Boros Reckoner and then Blasphemous Act to give Australia the first point of the match.

Spanier was unflappable as Cheung did his best to get a foothold in the match. Threat after threat was dealt with, until finally a Thragtusk stuck. Unfortunately for Cheung, that was only because Spanier wanted to make use of it. He Cloned the beast, and then a turn later played two Restoration Angels, gaining ten life and getting two additional beast tokens. A few attacks and it was all down to the B seats.

Now that all eyes were on them, Anderson and Gulevich took it slow. Anderson had out Voice of Resurgence, Cloudfin Raptor, and Young Wolf, but was stuck on two lands. Gulevich drew and played Boros Reckoner to go with his two 2/1s, but refused to attack. He was out of lands too, at 3. Anderson drew and missed, and played a second Voice. Gulevic attacked with his Reckoner, and Anderson blocked with Voice of Resurgence to get himself a token. Gulevich aimed the damage at the other Voice, and then responded with Searing Spear on the Cloudfin Raptor. 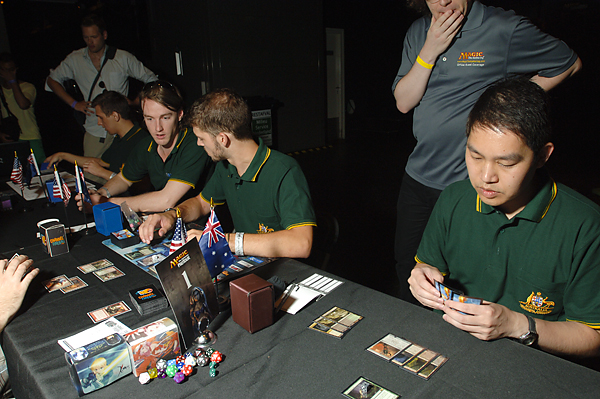 Australia's dedicated testing has served them well, with the teams capable of coming up with a Bant Tokens deck that has a brilliant surprise factor.

Anderson drew and still failed to find a land. He attacked with his currently 3/3 tokens and passed the turn, planning a devastating Druid's Deliverance. Well, devastation was had, just not the way he planned it. Gulevich drew and played a fourth land, then attacked with his Reckoner. When Anderson went for Deliverance, two Searing Spears left him with nothing but Young Wolf and some prevented damage.

Anderson drew and played Experiment One, and planned a little reversal of fortune. When Gulevich summoned Hellrider and attacked, Anderson played Rapid Hybridization on his own Young Wolf, giving him two 3/3s and a 2/2 thanks to proper stacking. They traded with most of Gulevich's creatures, leaving him with just a 2/1. Unfortunately for Anderson, his deck absolutely refused to give him a third land, and Gulevich had more gas in the tank. A few turns later, the Americans had won it.

I could only catch Team USA for a moment, but I asked them about the deciding game and the double Searing Spear blowout. Captain Utter-Leyton smiled, saying, "I think if he plays the Deliverance on our upkeep, we can't win, since we can only cast one Spear in response." A look of revelation came over Cecchetti's features. "Oh, that's sneaky. I didn't think of that."