Share Article
Share Tweet Share
Harle won English Nationals back when it was just a qualifier event for UK Nationals. The best that he has done at the event since was a 2nd place finish back when Invasion and Odyssey block were legal. Now it looks like English Nationals is disappearing in the face of UK Nationals' return, and on 4-0, Tom was keen to secure the title that would last for quite a while. 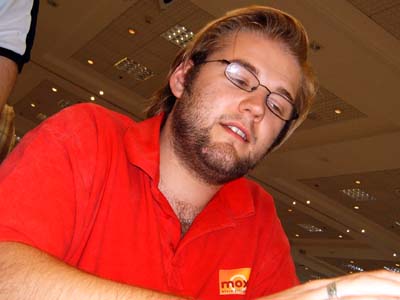 On the other side of the table was Stefano Gattolin, an Italian by birth and World Cup Celebration, but a resident in England for a good few years now.

The first play of the game was an Azorius Signet from Stefano, while the first beater was a Shrieking Gargoyle off blue, white and green mana from Tom. Gattolin tried to get rid of the flier with a Gelectrode, but was thwarted the first time by a Repeal before the pinger could get active. The second time it did stick, but by this point Tom had a bigger threat, in the form of an Assault Zeppelid.

Stefano played a Steamcore Weird and used Gelectrode to finish the bigger flier off, before playing Gobhobbler Rats. His side of the board was filling up nicely, while Tom's was suffering the slings and arrows of a powerful Izzet start.

Concerned by the Gelectrode, Tom transmuted Drift of Phantasms to find Vigean Hydropon and passed after an attack. Stefano got knocked down to 14, to Tom's 17, but still looked in great shape as he kept attacking and cleared his opponent's board, enabling a bloodthirsty Bloodscale Prowler in the process.

Tom's rebuilding started with Vigean Hydropon, and continued with Nightguard Patrol, who got a counter grafted onto him without incident. An Ogre Savant from a happy Italian took the blocker out of the way though, and further attacks took Tom to 10.

When Nightguard Patrol tried to come back, he got shot by Gelectrode before Graft could resolve. Tom responded with a Scatter the Seeds to effectively make three 2/2s, but couldn't help but lose his guy.

When Stefano had a Tidewater Minion to go with his Gelectrode, all Tom could do was bemoan his luck. 'That guy's a bit good' he pointed out as he dejectedly played a Leafdrake Roost, which had rather been made redundant by the pinger/untapper combination on the other side of the board.

It didn't take long for Stefano to blast through the wall of Saprolings that Harle had put together though, and in short order, Tom was scooping up his cards and looking to his sideboard for monsters with slightly higher toughness.

Tom led off with a land, then Gruul Turf, the karoo in his splash colour, while Stefano was playing it basic with his lands, but had the first threat in the form of Surveilling Sprite. Each player had a Silkwing Scout for the following turn, meaning that it was to be a battle for the skies in the early game.

Tom was the first person to play a ground pounder, in the form of Verdant Eidolen, while Stefano fought back with a bloodthirsty Bloodscale Prowler. There was to be less board domination by pingers this game it seemed. If anything was to dominate the board, it would be Harle's freshly cast Selesnya Guildmage - his first pick of the draft.

Stefano played an Ogre Savant to delay the Guildmage's effect on the game, which was responded to by a Scatter the Seeds from the former champ. A few more beats were traded, and the game looked to be coming to some sort of stall, which only seemed to favour Tom with his Guildmage.

Stefano was very much on the attack though, having a Wrecking Ball to clear a path right through the 2 mana man that does everything, and creatures sufficient to tie the game at 12 life each after an attack. An Assault Zeppelid came down for Tom, but the Italian had a great reply, in the form of Stinkweed Imp, the threat of whom blocking is often as good as the actual block.

An Infiltrator's Magemark meant that the Zeppelid plan was looking better and better though, meaning that only flying walls could block the trampler. As Tom had got a couple in the draft, he was confident that Stefano wouldn't have any. What Stefano did have though, was a Vacumelt, to get rid of the Zeppelid for the time being, and the Magemark for good. The life totals were now 10-4 in Tom's favour, but the Englishman's board presence wasn't good enough that he could easily feel too confident.

Helium Squirter, Assault Zeppelid and Silkwing Scout made up an impressive air force for Harle, who spent a few turns building his board, while Gattolin had only ground creatures to try to match with. On just four, he fell to one from air attacks, which also cleared out his air defence.

Had Stefano had some green mana, he could have mounted a counterattack with his Mortipede from the turn before. Unfortunately for him though it was not to be, and he conceded when Tom cunningly remembered to block when Stefano counterattacked.

For the decider, Stefano elected to go first, and asked his deck for a good hand. Either it wasn't listening or it just didn't care. His mulligan, however, did seem pretty powerful. It contained a certain dragon legend known as Niv Mizzet. If Stefano got to 6 mana, Tom would be in a lot of trouble. 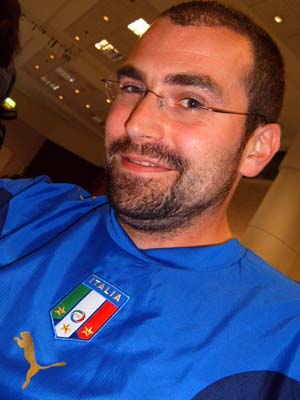 Gattolin led with Izzet Guildmage, while Tom had a Dryad Sophisticate, who remained, for the time being, blockable. Stefano got in one cheeky hit, and played a Surveilling Sprite, before the game stalled a little on the ground thanks to a Carven Caryatid from Tom.

It was probably just as well then that Stefano was content to attack in the skies; first with Surveilling Sprite, then with Silkwing Sprite.

Tom had Verdant Eidolen, who got an Infiltrator's Magemark, and a Selesnya Guildmage. All Stefano had was a Cackling Flames for the mage.

Oh, and a land, Niv-Mizzet for the following turn.

'Errrrrrrrrrr yeah. That seems fair.' Remarked Harle, clearly trying to convince himself as much as anyone else.

Tom continued to beat in as best he could, but was now taking significant beats in the air, and extra damage every time Stefano drew. On the first Dragon swing, Tom went down to four, and needed an immediate answer before the second. His Repeal was a temporary reprieve at best, and Harle went to 2 on the following swing. Stefano was down to 9, but seemed well safe from the little green men on the other side of the board - especially when he played an Ogre Savant to bounce one of them.

Tom did have an Assault Zeppelid and a Silkwing Scout with which to block in the sky, but on just 2, to his opponent's 9, he still looked a little concerned by Niv-Mizzet when the Dragon Legend returned.

Tom transmuted a Drift of Phantasms to check his deck for answers, but saw that there could be none. He extended his hand.