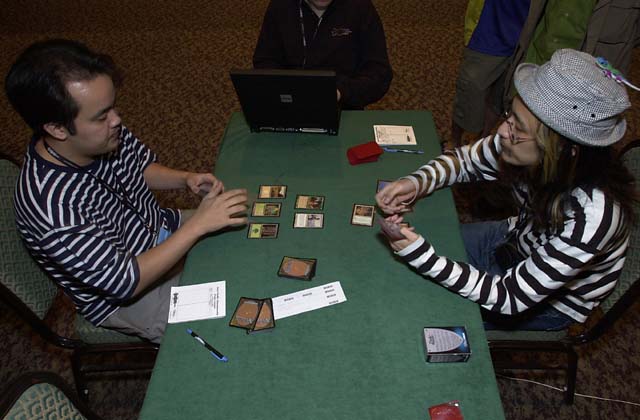 Nicknamed "The Hat Man" because of the array of original hats he wears to Magic tournaments, Satoshi Nakamura is perhaps the best-known Japanese player outside of his country. Having represented Japan at the Magic Invitational in Barcelona, Nakamura gained respect of spectators and fellow competitors alike despite the minor language barrier. In this round, faces Felix Flores Gonzales, an up-and-comer from The Philippines.

Game 1 was all about the 1/1's. Nakamura busted out with a horde of them over the first few turns. He summoned a Tidal Visionary, then Razorfin Hunter, then Crimson Acolyte. On turn four, he tried to cast a Coalition Honor Guard. Gonzales, who has not played a spell to this point, countered it with Mystic Snake. Treefolk Healer joined the 2/2 Snake on the table, creating somewhat of a standoff.

At the end of Nakamura's turn, Gonzales attempted to return the Snake to his hand via Rushing River. In response, Nakamura cast Jilt, killing the Snake and bouncing the Treefolk. Gonzales sacrificed Tinder Farm to generate white mana and summoned a Charging Troll. Nakamura cast a Slingshot Goblin, completing a powerful combo. Nakamura was able to use the Slingshot Goblin/Tidal Visionary/Razorfin Hunter combination to take out the Troll and threaten to take out any other three toughness creatures in the same fashion. 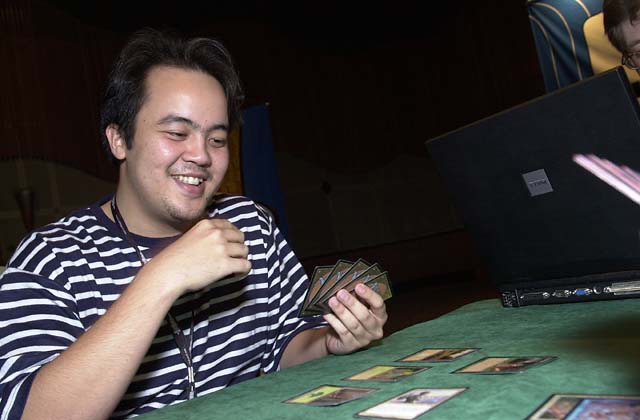 Gonzales bought himself a turn by using a Hunting Drake to return Slingshot Goblin onto the top of Nakamura's deck. He desperately needed white mana to cast an Armadillo Cloak he was holding, but none was coming. He bought more time by casting another Rushing River to bounce the Goblin. White mana never came, and Gonzales was forced to concede the game two turns later.

Game 2 gave Gonzales a choice. Would you keep this hand: two Islands, three Forests and two Rushing Rivers? I would not. Gonzales thought for a while, and made the same decision, choosing to mulligan down to six cards. Nakamura's mana draw was imperfect, but reasonable and he kept his hand.

Gonzales summoned a Samite Pilgrim followed by Ana Disciple. Nakamura was holding these two 1/1 creatures at bay with Benalish Lancer. He failed to play a fourth land, but Gonzales did not have the pressure on the table to gain an advantage. He summoned an Urborg Elf, and Nakamura cast Disciple of Kangee. Stuck at three lands himself, Gonzales used the Elf to generate the fourth mana to summon Living Airship.

Nakamura finally drew a mountain - his fourth land - and cast a Coalition Honor Guard only a turn before Gonzales would have enchanted his flying ship with Armadillo Cloak. This option no longer available to him, Gonzales had to decide between keeping his mana open for Mystic Snake or Rushing River in his hand, or casting Kavu Climber. He chose to summon the Climber. Nakamura made a Slingshot Goblin, which could pose a very serious problem in combination with his Disciple of Kangee. Nakamura used this combo to kill the Samite Pilgrim. At the end of that turn, Gonzales attempted to cast Rushing River with kicker, but Nakamura was ready for him with a sideboarded Gainsay. He then proceeded to take out Urborg Elf and Ana Disciple in similar fashion. 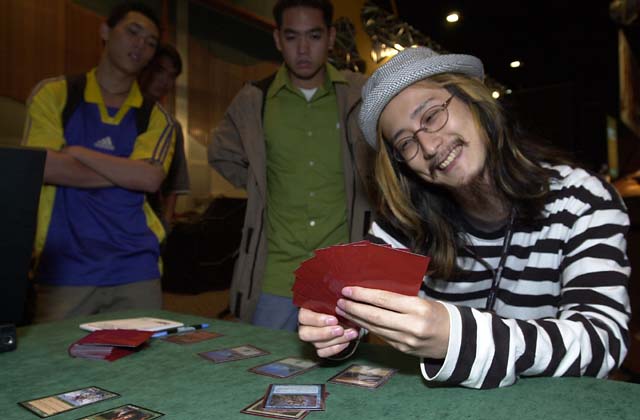 Gonzales used Mystic Snake to counter Razorfoot Griffin, but Nakamura remained firmly in control of the game, despite being mana-shy. He summoned another Benalish Trapper, a Coastal Drake, and Raka Disciple. Gonzales was able to get his Snake back by casting an Arctic Merfolk with kicker. Kicker cost cannot be responded to by instant-speed effects, and so the Snake was safe from the clutches of Slingshot Goblin for now.

Nakamura went on to summon more creatures. Although Gonzales could have held on for perhaps as many as six more turns, he knew that his deck offered no ways to swing the game and conceded, rather than playing it out to the end.