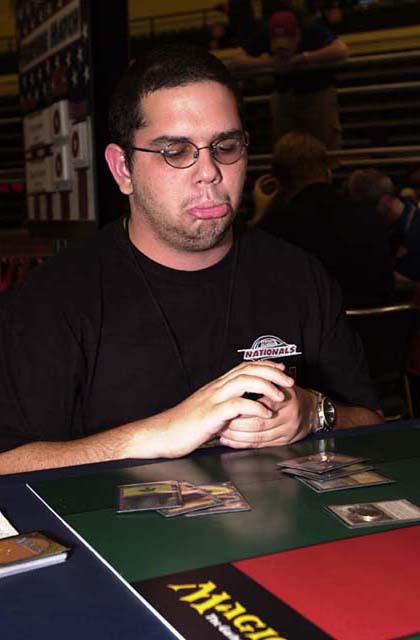 Frank Hernandez burst onto the professional Magic scene last summer when the Florida local made the U.S. National team and helped that team win the World Team championship. David Bachmann had his moment in the sun during 1998 when he put up back to back Top 4 finishes (at Price's Pro Tour-Los Angeles and Finkel's Pro Tour New York). He almost made a third Top 8 that season, but he lost the last round of the Swiss at Pro Tour Chicago to the eventual champion, Randy Buehler.

Both players have drifted out of the spotlight more recently, but both players came to Orlando hoping to put up another good result and both players started out 3-1.

Hernandez drafted an aggressive green/white deck while Bachmann's black-blue-white was more controllish. Bachmann played out a Samite Archer, which slowed Hernandez down while his Phyrexian Slayer chipped away at Hernandez's life total. Bachmann used Agonizing Demise to deal with Hernandez's first kicked Benalish Lancer while Cavern Harpy held off the second one.

Bachmann seemed to have the game under control, but then Hernandez played Natural Emergence, gating his Fertile Ground back to his hand and turning all his lands into 2/2 first striking creatures. For some reason, Hernandez did this after his attack phase and thus he missed the opportunity to attack for six damage. This allowed Bachmann to survive Hernandez's next attack phase and counter-attack for the win. Hernandez saw his mistake immediately and muttered "I'm an idiot" as he scooped up his cards to start shuffling for game 2. 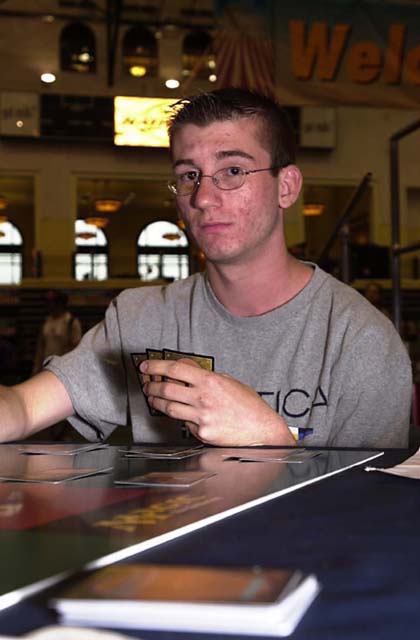 Bachmann had Samite Pilgrim and Cavern Harpy again in game 2 and the combination once again made it hard for Hernandez to bust through for damage. Hernandez just kept playing more monsters and sending them in. He did draw a Lashknife Barrier, but by then Bachmann had a kicked Serpent in play and the ground was thoroughly stalemated. Samite Archer, Phyrexian Slayer, and Cavern Harpy then turned their attention to Hernandez's life total.

Rampant Elephant threatened to clear a path through Bachmann's defense, but absolutely no one was surprised when Bachmann had an answer - the blue half of Stand/Deliver allowed him to minimize damage and kill off one attacker. Hernandez's Elephant actually succeeded in luring a couple blockers on its second try, but that only knocked Bachmann down to 4 and Bachmann's flying counterattack was too much.