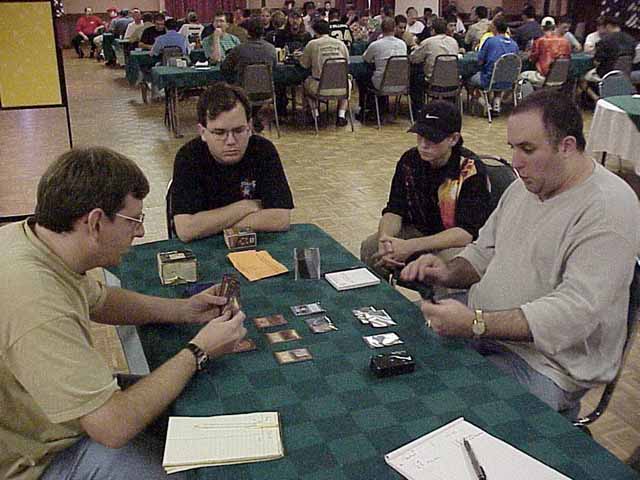 Two of the more talkative people on the professional circuit squared off in a feature match during round five. Neither Jack nor Gary ever seems to be at a loss for words, unfortunately for Jack, these games were about the quietest I've ever seen him. Both players sat down and were being their usual demonstrative selves, and they rolled a die amidst some polite banter. Jack won, and elected to, "Try to go first." Gary informed him that he would probably succeed in that endeavor and we were off to game one. 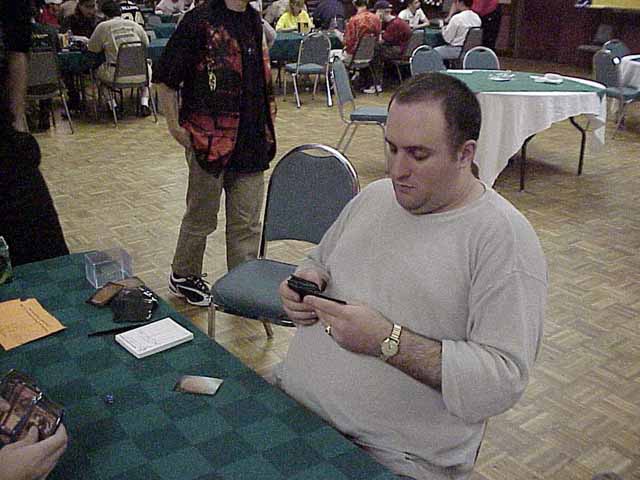 After the players drew up their hands, Gary showed me a hand (he was drawing, remember) that contained a lone Island, and a few spells that could be cast for 2-3 mana, all with blue in their casting cost. This play seems a little risky to me, but perhaps not overly so as Gary did have multiple plays were he to draw one or two more land, even if one wasn't a swamp. At any rate, Gary was rewarded for his semi-gamble with a swamp off the top, followed by two more Islands. While Jack did nothing other than a turn three Slimy Kavu, Gary fell into his mana curve perfectly, with a turn two Vodalian Zombie, turn three Sky Weaver, turn four Shoreline Raider, and turn five Ravenous Rats. Jack kept digging for a swamp, but since he was never successful, he used the Slimy Kavu to make one for himself, and Soul Burned the Sky Weaver, and Exotic Cursed the Shoreline Raider. Jack's game slowed down at this point, but Gary wasn't doing much either. Jack came up with a Ravenous Rat of his own to trade with Gary's, and both players drew and said "go" for a few turns after that. Eventually, Gary found a (black) Alloy Golem, and when he recoiled Jack's attempt at a blocker (Firescreamer) Jack fell to 1 life. When Jack tried to replay the Firescreamer next turn, Gary had the Exclude and the win. 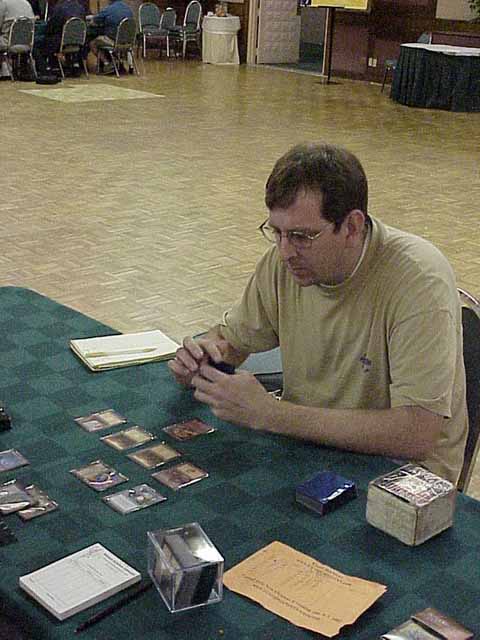 Game 2 didn't see Jack fare much better. Jack kept an opening hand of two mountains and no immediate one or two mana plays. He failed to draw a third land until turn seven, at which point he had already discarded two Plague Spores and a Soul Burn. Gary already had a Sky Weaver, kicked Faerie Squadron and Vodalian Zombie in play, as well as having cast Fact or Fiction. When Gary launched the final attack on his seventh turn, the Slimy Kavu Jack played one turn previous traded with the Sky Weaver, and Gary proceeded to drop land number seven and Ghitu Fire Jack for exactly six and take the match.