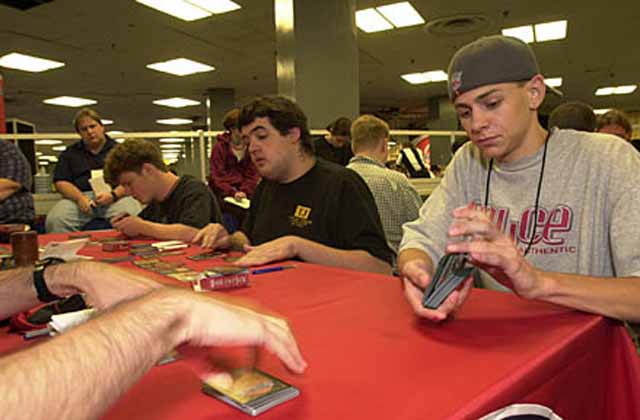 Svend Geertsen and his teammates were celebrating when Billy "Baby Huey" Jensen played a forest and a mountain on his first two turns. They thought Geertsen's red/green deck was ideal for the mirror match. However, in game 1 it was Huey's Kyren Negotiations that looked special.

At the next table Raphael Levy played out a Ramosian Sergeant, Defiant Falcon, and Fresh Volunteers while Casey McCarrel played two plains and was forced to start discarding. By the time McCarrel drew a swamp he was facing down Stinging Barrier as well and it was just too late.

It's not possible to start a game much better than Ben Rubin's blue/white deck did against Michael Sochon. Turn 2 Waterfront Bouncer. Turn 3 Troubled Healer. Turn 4 Oracle's Attendant. Turn 5 Nightwind Glider. Did I mention that Sochon was playing mono-black? Sochon scooped fairly quickly so he would have time to try to win the next two games.

Huey, Ben, and Casey won 2 out of 3 game ones, but Jensen lost a race against Geertsen and the match was all square. Levy had his Rebel engine running once again in game 2 and this time Coastal Piracy was adding fuel to the fire. McCarrel tried a counter-attack thanks to some mercenaries, especially Agent of Shauku. That forced Levy to play defense for a few turns, but he was able to survive the Shauku onslaught and start serving with his fliers again. S.M - R. had the first match.

Huey had an amazing curve in game 3: Vine Trellis, Giant Caterpillar, Thresher Beast. However, Geertsen's opening was actually better. His Pygmy Razorback was outclassed, but Keldon Berserker and Living Terrain were bigger than Huey's creatures (and yes the Berserker gets the bonus when attacking alongside Living Terrain). Huey played out a pair of Flowstone Walls and they were amazing. Flowstone Wall rarely makes the cut into good limited decks (Geertsen even asked "Is this a joke?" when Huey played #2), but they were great against Geertsen's fat and they make sense in a deck with Kyren Negotiations. Huey next played a Power Matrix and that allowed him o attack in the air with his Tresher Beast. Geertsen eventually slogged through all those Walls thanks to a Flameshot after attacking, but it was too late and Huey's Power Matrix carried him to victory.

It all came down to Rubin's match and Rubin was ready. He and Sochon traded spells for a while, but Rubin then played out Drake Hatchling and Stronghold Zeppelin to serve as his offense while a Waterfront Bouncer protected by Alexi's Cloak was excellent on defense. Game and match to Huey, Ben, and Casey. With one round to go their 4-0-1 record has them tied for second place.