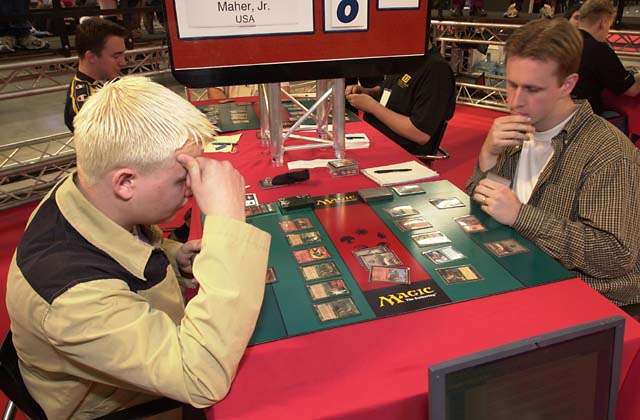 Both of these players were on a very nice 4-0 record going into the second draft, where they drafted along with Kai Budde. Janosch had a Green-Red deck - he was virtually forced into those colors by Kai drafting Blue-White-Black to his right, and he was splashing Black for a few powerful spells. Bob was playing Blue-Black as well.

Janosch started but Bob played a first turn Faerie Squadron, probably signifying that he had a gating creature in his hand. Indeed his second turn play was no surprise - Cavern Harpy. Janosch played a Nomadic Elf, and then a Rage Weaver, but they couldn't get past the Harpy. Bob added an Urborg Phantom to the board, giving Janosch the chance to go aggro if he desired, by burning the Cavern Harpy.

He chose not to as this wouldn't let him get in enough damage before the Harpy returned to play, and instead summoned a Pouncing Kavu (without kicker as he had only three lands in play) that held off Bob's Phantom. Maher summoned a Phyrexian Bloodstock as well and found his Urborg Phantom Zapped when he tapped out.

Despite this card advantage, Cavern Harpy obviously caused the German some problems as he didn't have anything in play sizeable enough to get past it. He was therefore happy to draw into Amphibious Kavu, which would become 5/5 if the Harpy blocked it. Bob felt the need to use a removal spell on the Kavu - he Agonizing Demised it.

When Bob attacked with his Bloodstock, Janosch, still without a fifth land decided to double block it with the Pouncing Kavu and the Rage Weaver. Kühn finally drew a fifth land after Bob summoned Caldera Kavu, and used his mana for a Kavu Climber. Bob did have five lands, but not the second Island necessary to play his Faerie Squadron with kicker.

Also the German had a Plague Spores in his hand, which he could use to reduce Bob to no Islands if he drew a Swamp or a seventh land so that his Elf could produce black mana. He didn't draw the Swamp, so he summoned a Thornscape Apprentice and a Kavu Aggressor. With the Nomadic Elf in play he could use the Apprentice to tap Cavern Harpy, and his board position began to look a little threatening for the American even though they were both still on twenty life.

Searching for an answer, Maher played Vodalian Merchant and drew into a Nightscape Familiar. This seemed to allow him to keep the board locked down fairly well, and it appeared the players were in for a long game.

Janosch had a nice looking hand of Plague Spores, Explosive Growth, Zap, and Scorching Lava. When Bob used Magma Burst to clear one of Kühn's two Kavu Climbers and the Apprentice, Janosch used Explosive Growth to save the tapper.

With Bob on three lands, Janosch didn't wait long before playing his Spores once he drew a seventh land. Bob responded by Recoiling the Kavu Aggressor and was reduced to two lands in play - he must have been regretting his decision to use the Magma Burst with kicker. Even so, Kühn could not attack past Bob's blockers. 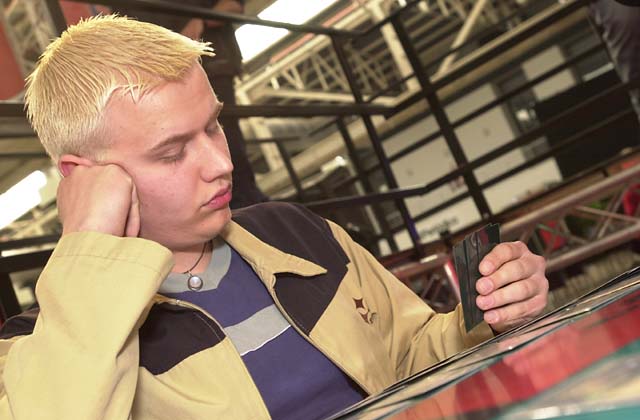 Maher had no Islands, however, and he had to sacrifice his Morgue Toad in order to tap out and play a Sea Snidd. This turned out to be rather a bad thing to do. His Snidd was Lightning Darted, and his Familiar was Zapped.

This left Bob with only Cavern Harpy and Vodalian Merchant in play, and the German made his first attack of the game after tapping the Harpy. After one more attack, Kühn could finish the first game with a Breath of Darigaaz.

This time it was Bob's turn to start. Janosch played a Rage Weaver, and without a Swamp in play, Bob didn't have anything to do. The German summoned a Kavu Aggressor as well, and Bob once again played his Vodalian Merchant to search for an answer.

He didn't draw anything though, and the Kavu Aggressor reduced him to fifteen. Janosch added a Slingshot Goblin to his growing horde, and Bob had to Magma Burst it since he still didn't have the Swamp he needed to play any creatures. 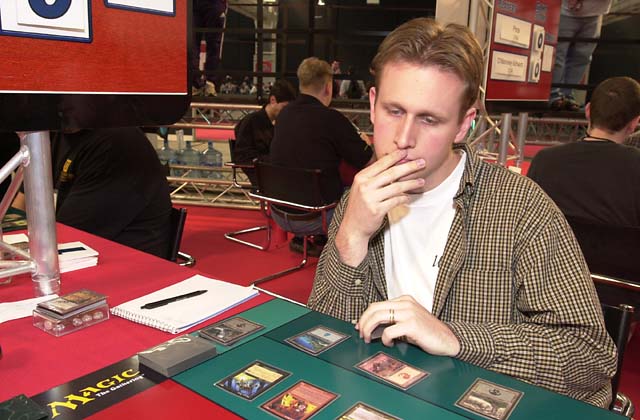 The Aggressor took him to twelve, and he finally drew a Swamp. His decision to cast Probe with Kicker meant that Kühn could put him dangerously low on life, and Janosch had a Breath of Darigaaz in hand. Swinging in with all his monsters forced the American to block Rage Weaver. The attack put Bob on six, and Kühn summoned an Amphibious Kavu as well.

The position looked totally unworkable for Bob, and his Nightscape Familiar followed by Flametongue Kavu on the Ancient Kavu was a good attempt to survive. Nevertheless it was too little too late, Kühn used Scorching Lava to clear away the Flametongue and then attacked, and used Explosive Growth.