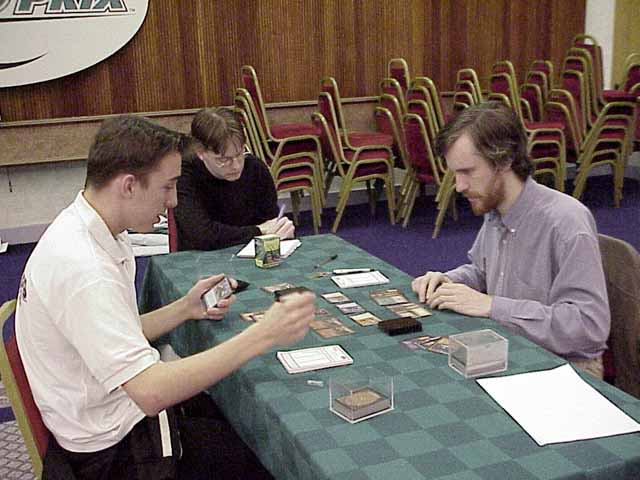 Round 5 and one of the UK hopes (John Ormerod) met one of the top French players (Olivier Ruel). Ruel is one of the members of the successful Black Ops team that won Grand Prix Cannes and the Team challenge in New York earlier this year. He is also making a name for himself as an individual player, taking 2nd place In Porto (incidentally losing to his brother Antoine in the final). John Ormerod is a respected UK player with a PT top 8 credit and twice coming 9th. Ruel won and elected to draw first.

Game 1 proved pretty much a non-event as Ruel's 5 colour deck gave him only 3 mountains and a swamp. The two Kavu Scouts he could cast were effectively nullified by Ormerod's Shoreline Raider. John niggled him with a Dream Thrush then cast a Ruham Djinn to at least make the defeat look respectable.

Game 2 and Ruel changed his mind, electing to play this time. It seemed the right choice as he started early beats with 2 Apprentices, even dropping an Armadillo Cloak on one to up the Aggression. Ormerod excluded a second Apprentice but Ruel's deck proved too quick this time, giving him all the colours he needed apart from black. Ormerod made a 6/6 Vodalian Serpent but Ruel had been holding a Quirion Sentinel. This gave him the black mana for the Agonizing Demise in his hand and with the Serpent gone Ormerod, who was screwed for black, conceded.

Game 3 and finally a proper game. Ruel quickly gets 4 mana of different sources with a Quirion Elf. Ormerod irritates again with the Thrush, which turned Eco Warrior to turn one of Ruel's mountains into a forest. Then it attacked the next turn and Ruel came straight back with a hasty Halam Djinn. Ormerod recoiled it and then there was a stand off as Ruel didn't recast, maybe fearing Exclude. Or to use his own Exclude as it turned out when Ormerod attempted to cast a Tower Drake. Ormerod recovered an Urborg Skeleton which had earlier fallen victim to an Exotic Curse and then, once the Djinn did in fact get Excluded, there followed a comical passage of play as the best assault Ruel could muster was a 1/1 Quirion Elf with an island-walking Traveler's Cloak, pumped +1/+1 every turn with an Apprentice. All Ormerod could return fire with was the Skeleton and equally pathetic metathran zombie. Then some excitement as Ruel made a 6/6 serpent. Surprise surprise, Ormerod also drew the same 6/6 monster. The potential stand off lasted all of 1 turn as Ormerod's Serpent met an agonizing Demise with kicker. To add insult and extra damage Ruel pumped the Serpent with his Apprentice. An attack next turn and Ormerod was down to 2 life and looking out. Then his deck decided it had cards in it other than land and he dropped a Stalking Assassin. Ruel tried to plague spores it before it was pointed out the Assassin was black as well as blue and he had to target the puny Metathran Zombie instead. Suddenly Ormerod looked back in it as first the island hopping elf and then the serpent met untimely ends. Ruel's deck continued to give him nothing much and he was soon staring down an attendant and Ruham djinn. Defeat followed soon after as Ormerod capitalised on his escape and Ruel drew all the lands in his deck bar two.