Share Article
Share Tweet Share
match pits two of the all-time greats against one another, playing decks that, well, let's just say that "all-time greats" is not a good choice of descriptions for them. Gary was packing the five-color John Avon special that usually wins via attrition (either Millstone or ). Kai was stuck with the Glen Angus deck, which was basically four s and a bunch of tenuous combos that revolve around changing creatures' colors.

Kai started with a mulligan, evening out the players' starting hand size. His six-card hand was also bad, but he had to keep it. "I parised a hand with into another one," he moaned, "How lucky."

Kai looked like he was going to be land-flooded in game 2, but he kept drawing and playing creatures: two Tidal Visionaries, two , and a . Justin was holding his own quite well, using to save himself a bunch of damage, then Pyrotechnics to kill a Visionary and a Kavu, then another , a Wall of Air, and a Tower of Eons, which he activated several times to gain 10 life!

Justin was short on white mana, so he didn't play out the he was holding just yet. Kai used Sever Soul to kill the Wall, and played a and another . Justin drew another Explosive Vegetation, found his missing color (eliciting another "How lucky" from Kai), and then started going to town again.

Pyrotechincs the Kavu and the Assassin. Gain 10. Gain 10 more. the Visionary. Kai was drawing nothing but land, and would eventually fall to the big Apocalypse artifact removing everything he had from play.

Justin had said going into the Auction that he felt people would underestimate the Avon deck and that he hoped to get it. It came at a reasonable price - 6 cards, 16 life - and is working well for him so far. Kai, on the other hand, wouldn't commit to any deck and was stuck with the dregs. He's 0-2 with it so far, and I expect him to go 0-3. 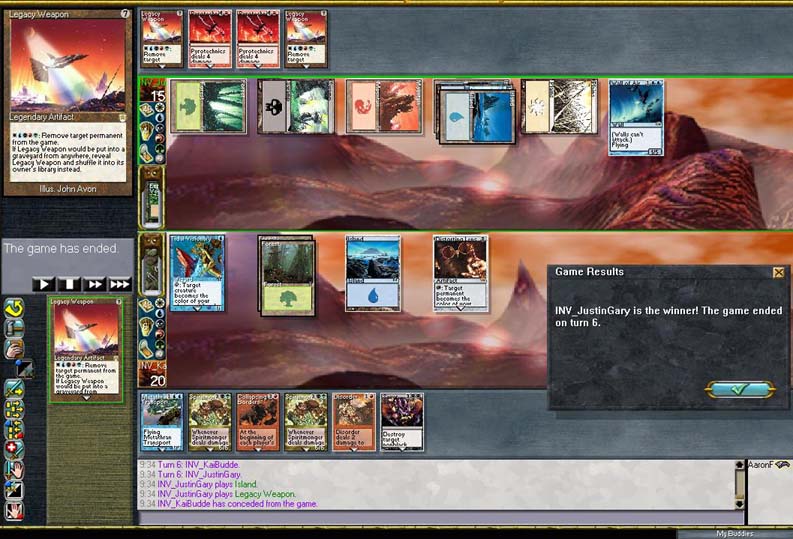