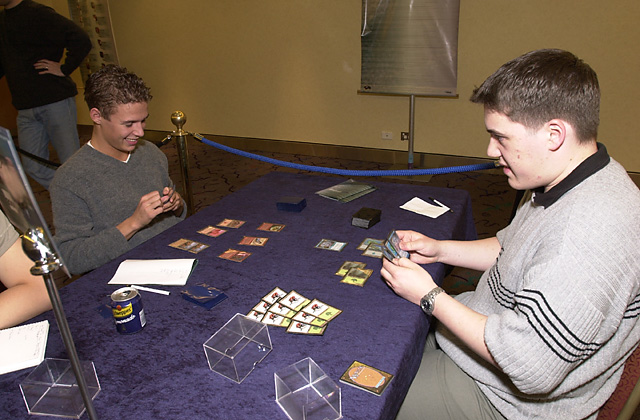 The only two European representatives matched up in this round, with Kai Budde playing a Tempest, Urza's Legacy and Urza's Destiny version of Squirrel Prison. Noah was with a burn heavy Sligh deck, utilizing Tempest, Visions and Urza's Destiny. Kai has been having a terrible day so far, starting 0-4, whilst Noah was cruising at 3-1.

Noah came out fast with a first turn Mogg Fanatic, which was matched by Kai's Heart Warden. Noah cast Suq'Ata Lancer on the third turn and attacked with both creatures, and Kai traded is Heart Warden with a Mogg Fanatic. Kai drew very poorly, not having any third turn drop or second Island, and so cycled a Miscalculation and dropped an Island. Noah attacked again, as well as dropping two Goblin Masons. All Kai did on third turn was cast Plow Under, and when Noah showed Kai a Fireblast to fizzle the Plow Under, Kai scooped his cards in frustration.

The second game started even worse for Kai, having to mulligan to six after having two Islands and no Forests in his opening hand. Kai sighed when he glanced at the next two cards, which showed the two Forests that he was missing. Kai kept his next hand and dropped an island. Noah started quickly with a Jackal Pup, following up with a Fireslinger, while Kai only dropped a forest. Noah continued his slighlike draw casting a third turn Suq'ata Lancer, and attacked with the Pup and Lancer, bringing Kai to 12. Kai finally put up some defense with a fourth turn Tradewind, but it was all suddenly over on Noah's fourth turn when he fireslung Kai, then cast Kindle, then Reckless Abandoned his Pup and Fireblasted him out. Kai revealed in frustration the nine cards he sideboarded in, including 3 Chills and 4 Bottle Gnomes.

Kai was even more frustrated when he won the next matches for fun 6-2. Hopefully things will look up for the former World Champion tomorrow.