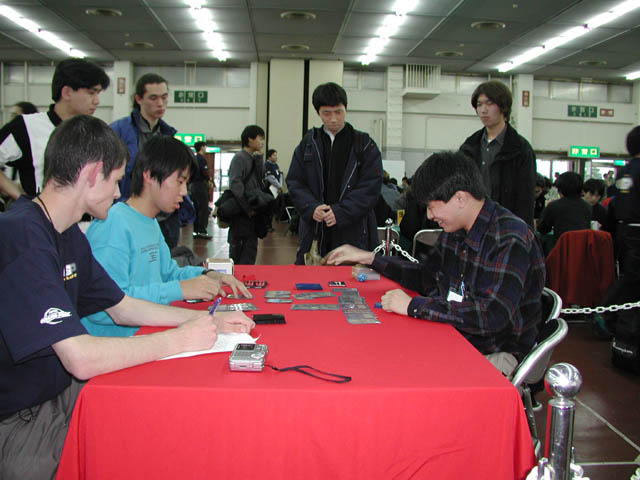 This feature match saw two big guns facing off against each other. We have Katsuhiro Mori, the top 18 year old player in Japan and the 2000 Magic Invitational invitee who could not attend the Invitational in Sydney due to school commitments, and the 'Blue Master' Tadayoshi Komiya, named as such for his many wins with blue decks of the day. Komiya is famous for playing such decks as Academy, Draw-Go, Accelerated Blue and Mind Over Matter. Both of these players had three rounds of byes so this was only their second round of play today.

Mori is playing white/blue/green and Komiya is playing black/red/green. Mori plays a very fast-paced game, so much so that it was hard to keep up with notes for this game.

Komiya starts and plays nothing but land for the first three turns, playing a Slimy Kavu and Urborg Skeleton on turn four. Mori's 2nd turn Benalish Trapper got a couple of early hits in and was joined with a Quirion Trailblazer on turn four, fetching a much needed Island and providing the 5th mana for a Kavu Chameleon with a green to protect from the expected terrors looming in Komiya's hand. Komiya played out a 5th turn Duskwalker with kicker, 6th turn Alloy Golem naming black and started to apply to the pressure to Mori. However Mori was prepared for the imminent attack with an Explosive Growth to pump his Kavu Chameleon up, taking out the Golem. Mori struggled for two more turns wishing he had white mana after Plague Spores wiped out the tapper and his only source of white. He was finally given reprieve in the delayed form of Utopia Tree and the next turn Mori drew Fertile Ground. This allowed Mori to play Glimmering Angel, Ardent Soldier with kicker and Alloy Golem (black).

Komiya had been given time to recruit an impressive army during this period of mana difficulties with successive turns seeing Marauding Knight (foiley) and Tsabo Tavoc (also foiley) coming into play. Tsabo was eating chump blockers each turn but for some reason that was not obvious Komiya began to sit on the fence with Tsabo. I think he could have gotten into a much stronger position if he had maintained the pressure on Mori as this allowed Mori to stabilize before shackling Tsabo down.

Komiya was not done with big fat black creatures though, summoning Goham Djinn and halting Mori's air offense with a mourning in an interesting play. Mori had one island untapped which Komiya turned into a swamp with his Slimy Kavu. Mori chose not to add blue mana to his pool which allowed Komiya to play Mourning on the Glimmering Angel. 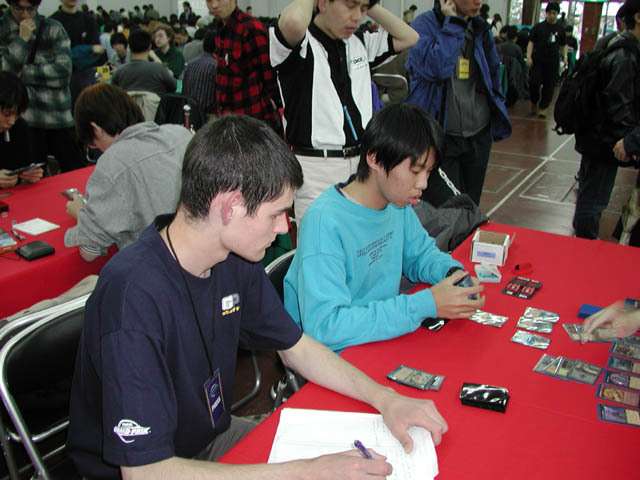 The game stalemated for several turns until Mori drew the game breaker; Wash Out, returning Tsabo, Goham, Duskwalker, Urborg Skeleton and Mourning. This opened Komiya up for Mori's army to come marching over, forcing Komiya to chump block to avoid death and the game was all Mori from here. Mori finished him off with a Canopy Surge he had held from his opening hand.