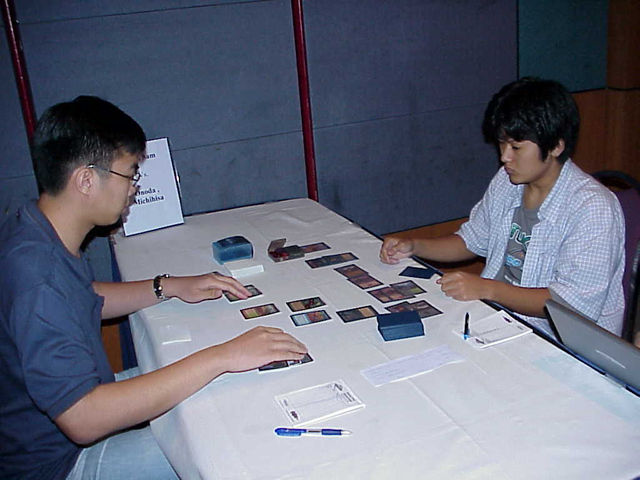 Sam Lau is one of Singapore's more accomplished players, having won the Singapore National Championships back in 1999, and finishing second at this year's Nationals. Incidentally, he is also the Grand Prix-Singapore defending champion, after his Trix deck took out Jonathan Chan's Sped Red last year. He faces Michihisa Onoda of Japan, former Japanese National Champion and current high school student.

Winning the die roll, Onoda chose to play first. Starting the game with an Urborg Volcano, it looked like he was playing one of the UBR Void or Crosis-Go decks. However, as it turned out, he was playing an R-B-g deck, given away by his Llanowar Wastes. Onoda played out a Nightscape Familiar on his second turn.

On Lau's turn, he thought for a bit between Firing the Nightscape Familiar while Onoda couldn't regenerate, or playing a Gaea's Skyfolk. In the end, he decided to cast a Gaea's Skyfolk, which met up with a Terminate. The Nightscape Familiar visited for a point of damage. It didn't help that out of the four lands Lau had in play, three of them were of the Apocalypse painland variety. Thus, Lau took two more points of damage from his Yavimaya Coasts in order to counter Onoda's Crypt Angel with a Mystic Snake.

Deciding that now was the time to rid himself of the Nightscape Familiar, Lau Fired the Familiar and Onoda, and attacked with the Snake, which soon met up with a second Terminate from Onoda while Lau did not have any free mana. An end step Fact or Fiction gave Lau the option of either Mystic Snake and Blurred Mongoose, or Kavu Titan, Yavimaya Coast and Island. 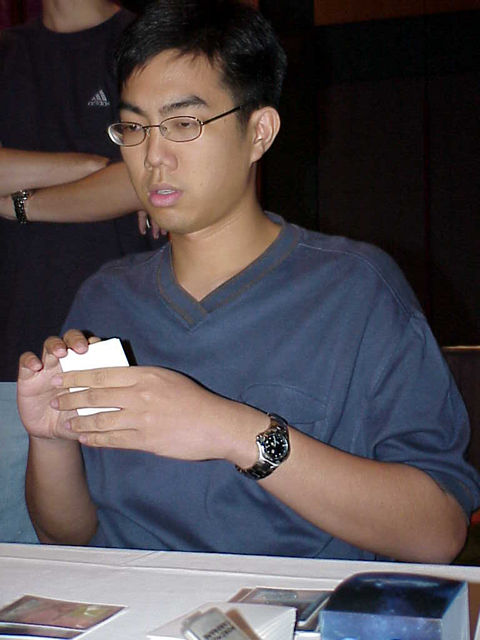 Choosing the bigger pile, Lau then decided to go for it, and played the Kavu Titan with kicker. Onoda drew, and tried to steal back the game with a Yawgmoth's Agenda, giving him access to his two Terminates- an advantage, thanks to his depleted hand. During Lau's upkeep, Onoda tried to Terminate the Kavu Titan, but Lau had a Repulse ready. A Thunderscape Battlemage with the black kicker stole back the card advantage Lau had garnered from the Fact or Fiction, which was soon Fired away.

Lau then replayed his Kavu Titan, once again with the kicker. This time, the second Terminate took care of it for good. A Crypt Angel brought back no companionship from the graveyard, but it was a threat nonetheless, since there were only two Nightscape Familiars in the graveyard. Lau had another Kavu Titan at the ready, and it soon entered play.

A second Thunderscape Battlemage proved its worth, taking away the remaining two cards from Lau's hand (Repulse and Prophetic Bolt), and destroying the Yawgmoth's Agenda via Llanowar Wastes, freeing Onoda of its one spell a turn drawback. Lau went into topdeck mode, peeling a Blurred Mongoose, which blocked the Thunderscape Battlemage. However, another Crypt Angel arrived, and revived the Battlemage, ready and waiting to tear out even more cards from Lau's hand.

Onoda attacked with the Angel and a Phyrexian Rager. At this point, Lau had the kicked Titan and a Gaea's Skyfolk in play. The life totals stood at 11 to 7 in Lau's favor. Sensing the means to remove the Titan, Lau decided not to block. His life total fell down to 6. Onoda then revealed the two remaining cards in his card: Thunderscape Battlemage and Shivan Zombie. When Lau attacked with both his creatures, the Titan was chump-blocked by the Battlemage. The trample damage, in combination with the Gaea's Skyfolk dealt only 5 damage to Onoda. Seeing no way out of the situation, Lau conceded the first game. 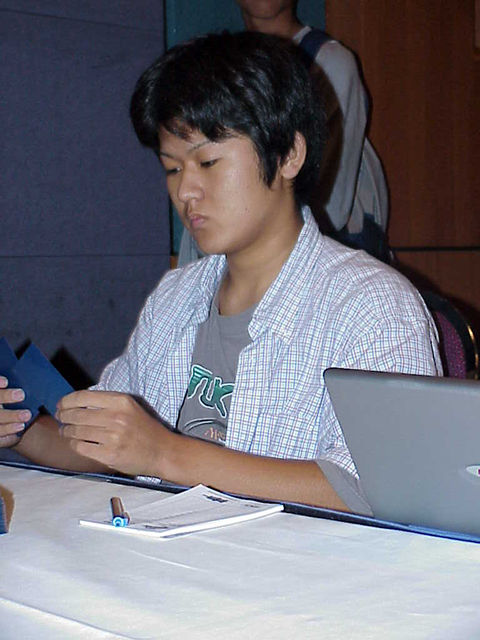 In a ritual well known to all tournament players, both players instinctively reached for their sideboards to further hone and tune their deck against the other. Michihisa brought out two Thunderscape Battlemages, one Phyrexian Rager and one Crypt Angel, bringing in a pair of Slays and a pair of Flametongue Kavus. Lau took out two Fact or Fiction, one Prophetic Bolt, one Blurred Mongoose and one Fire/Ice. He replaced those cards with Flametongue Kavus and Jungle Barriers.

Lau was forced to take a Paris mulligan in the second game, which he did with no hesitation. His second hand was not much better, lacking any two drops that are so important in this format, but having two lands, a Mystic Snake and a Flametongue Kavu. Lau chose to keep this hand. Onoda, on the other hand, had a two drop of his own, a Shivan Zombie. It was eventually Repulsed, then Excluded.

However, Lau's fourth land proved to be very evasive. With his land mix consisting of Forest, Yavimaya Coast and Shivan Reef, not only was Lau limited to his reaction capabilities, but his painlands were slowly killing him each and every time he removed one of Onoda's threats. This included Excluding the aforementioned Shivan Zombie, or countering a Crypt Angel with a Mystic Snake. In total, the lands dealt some 11 damage to Lau!

Skizzik came into play while Lau was caught tapped out, and reduced Lau's life total down to just three. When Lau Urza's Raged the Skizzik, his life total dropped to two. When a Pyre Zombie was returned from the graveyard and replayed, a Prophetic Bolt on it cost Lau another life point. In the end, Onoda reached the magical nine-land barrier and sacrificed the Pyre Zombie to finish the job.