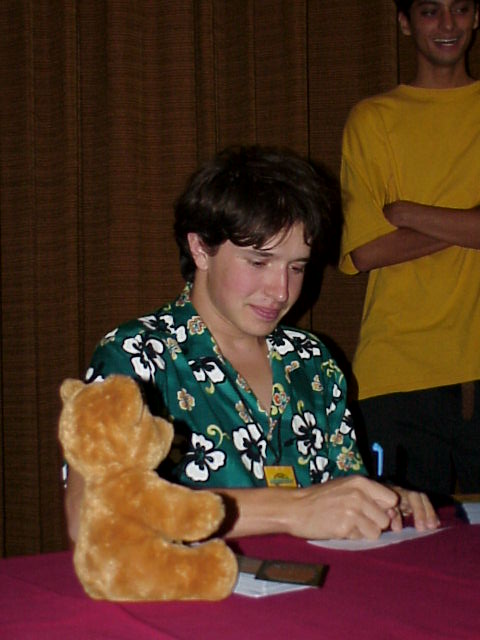 A Brazilian player with no byes makes his Feature Match debut versus a Chilean with a great deal of experience, and good results, in major tournaments (and a bright green flowerly shirt). Visibly nervous, Marcio has glad to have a Portuguese speaking reporter to help them break down the language barrier. They both made a considerable effort to communicate and took their turns carefully to avoid any problem.

The Chilean dropped the first creature: a Quirion Explorer. Marcio played a Kavu Agressor that Le Saux promtply removed with a Thornscape Battlemage. The next creature from the Brazilian side was a Kavu Recluse that got shot down by a Flametongue Kavu. The Chilean kept attacking.

Marcio found a blocker in a Magnigoth Treefolk but Rafael had another bomb: Thangarth, Talruum Hero. The minotaur didn't cause a lot of trouble because it suffered in an Agonizing Demise. But the Brazilian still had to deal with the onslaught of Rafael's creatures and his newest recruits: Stone and Serpentine Kavu.

A Thunderscape Apprentice and a Firescreamer tried to stop the flood but Cabral's one-card hand compared to the Chilean's hand of four gave Rafael the confidence to attack with everything. The Firescreamer blocked the Flametongue Kavu and the Treefolk blocked the Battlemage. Marcio tried to cast a Tribal Flames during combat. After explaining that it was a Sorcery, Rafael allowed him to take it back. 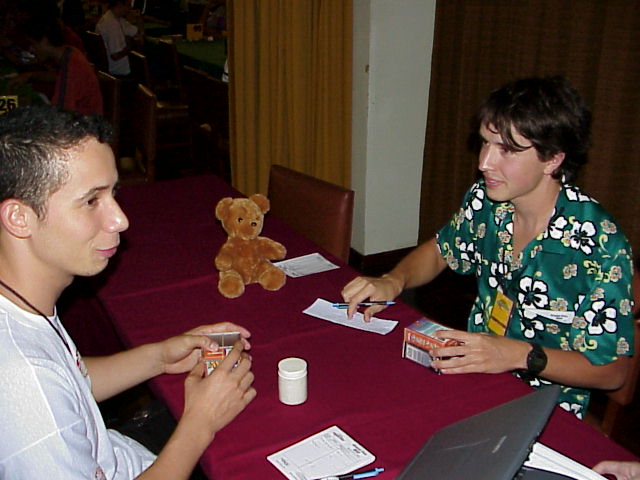 The Stone Kavu got bigger and suddenly Marcio found himself at a measly three life. During his turn Cabral correctly burned the Stone Kavu with the Tribal Flames but that seemed too little when Le Saux came swinging with everything on the next turn. Cabral blocked in the best possible way but still died under very hot Scorching Lava.

Rafael later later told me that despite playing with all colors except white he actually sideboarded in Dromar, the Banisher! To support it he increased his possible white mana sources from three to six.

Marcio opened up with a Nightscape Familiar while Le Saux played a Yavimaya Barbarian and a Tower Drake. Cabral dropped a seldom seen Llanowar Cavalry to stop the Barbarian but the Chilean would have none of that: his Flametongue Kavu claimed another victim. Next the Brazilian got out a Firescreamer but again Le Saux got rid of the blocker, this time with a Scorching Lava. 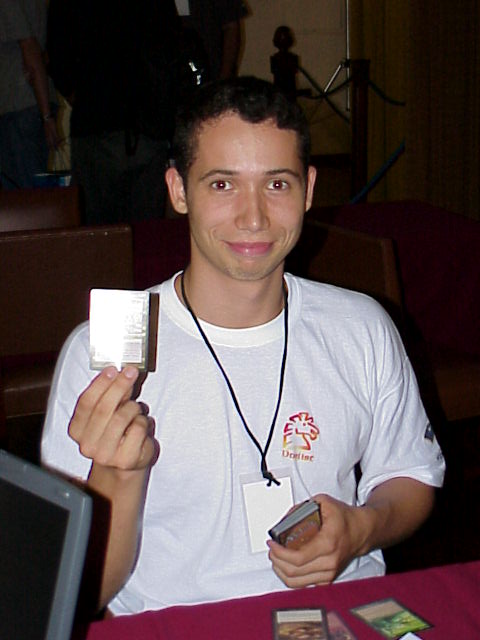 Cabral took a few moments to catch its breath and find some defense: a 3/3 Battery token. That didn't even slow Rafael, he sacrificed the Barbarian to cast a Death Bomb and removed it. The onslaught was not stopping and Marcio had no choice but to concede, smiling and saying, "Impossible."

He had to put up with his friends picking on him, but he took all in stride and with a big smile. He was just happy to be a part of the Grand Prix and to sit at a feature match table.