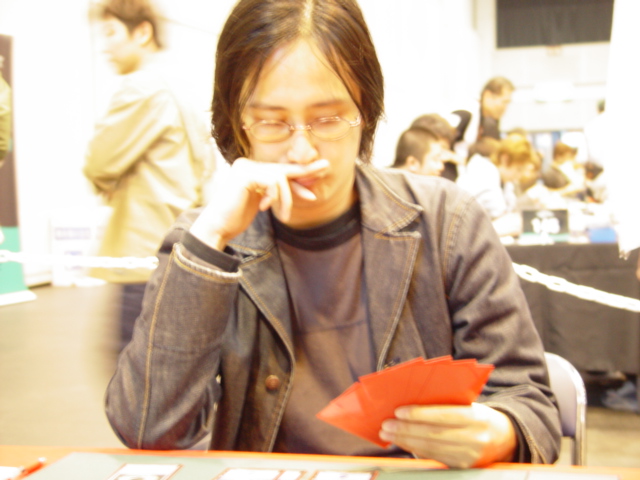 Satoshi Nakamura won the APAC Championships back in 1998 and was the first Japanese player to attend the Magic Invitational. He was the winner of Grand Prix Sapporo in 2000 and was a member of the Japanese National team way back in 1996. He is the only member of that team to remain playing actively. Rumor has it that his teammates were wiped out when a meteorite struck the Earth and plunged it into glacial darkness. Like all of the top Japanese players he too has a nickname--Hatman--for reasons I am sure you can figure out on your own.

After a quick game of Rock-Paper-Scissors Morita seemed sorry that he had won the right to play first when he took a mulligan. Nakamura was going to keep his hand and he made the first play with a Talisman but Morita had a Skyhunter Cub on turn three. Nakamura followed with a Yotian Soldier but had no land number three. Morita used Fabricate to get a Banshee's Blade and sent the turn back without the mana to play it. Nakamura was still out of land--he missed a pair of drops--but he played a Silver Myr.

Morita took his next turn to play and equip his Cub with the Blade. He swung in for three and put a counter on the equipment. Nakamura was still scuffling for land and he played a Lumengrid Sentinel and attacked for two with his Soldier and Myr. Morita dug for cards with a Thoughtcast and attacked for four. He played land number six--to Nakamura's two--and cast a Slith Ascendant.

Nakamura drew his third land and third Island and sent in his Yotian Soldier. He played a Vulshok Gauntlets post attack and equipped his 1/2 flier for defense. Morita sent both of his fliers into battle and Nakamura had to think about which one to block. The Blade was giving him fits but he blocked the Slith. Morita put the screws to Nakamura with his seventh land and a Luminous Angel.

There were some very impressive cards in Nakamura's sideboard including a pair of Vulshok Gauntlets, Mask of Memory and a Goblin Charbelcher. He opted to bring in the Mask of Memory, Regress and an . His second game already looked better when he decided to keep a hand with Leonin Scimitar and a Skyhunter Cub. He played them out and on turn four his 4/4 Cub chose not to attack with the threat of Cub and Banshee's Blade on the other side of the table. He played Silver Myr instead. Morita played a Pyrite Spellbomb and Thoughtcast for two cards. He passed the turn.

Nakamura played a Soldier Replica and was now free to send in for four. Even if Morita equipped his Cub and sent it over he would be able to kill it. Morita attacked with his unequipped Cub and Nakamura chose to trade with his Soldier. After combat a Titanium Golem saw play. Not a problem for Nakamura who played and used his Warhammer to make a 7/4 flier with Spirit Link.

Morita sent in his Golem and then played out a Clockwork Condor and a Somber Hoverguard with an eye toward double-blocking the Cub to death. Nakamura played a Lumengrid Sentinel and tapped one of the fliers when he cast Leonin Sun Standard. He got in for seven with the Cub unmolested.

Morita used his Spellbomb on the Sentinel and attacked with his team after equipping the Hoverguard with the Banshee's Blade. Nakamura knew something was up but he was not sure what it was precisely. He moved his Scimitar to the Myr and went to attack but Morita had the Blinding Beam with the kicker--err, I mean entwined. Nakamura shrugged and played a Neurok Spy and moved his Scimitar over which compelled Morita to scoop.

The table judge decided that Morita's sleeves were not up to snuff to remain on his cards for the rest of the match and asked him to desleeve for game three. 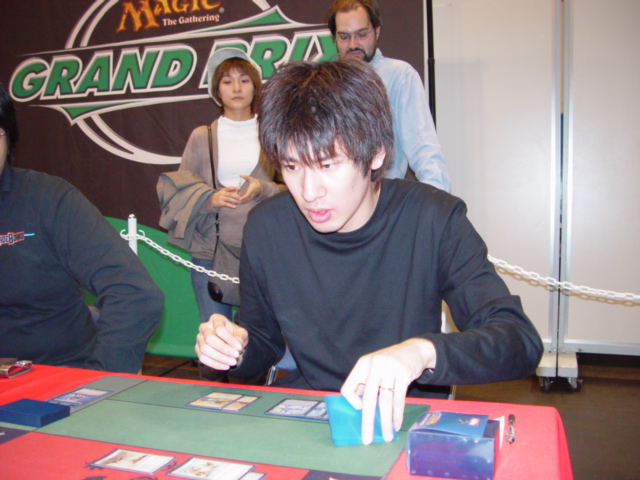 Nakamura meanwhile had a solid assortment of land and spells including a Cub and a Rustspore Ram. He opened with and a Myr. Morita's mulligan looked pretty darn good when he played a Slith Ascendant on turn three. Nakamura was able to keep it at bay with a Lumengrid Sentinel and Morita followed with a Cub.

Nakamura played his own Cub and a Leonin Sun Standard. Morita stared glumly at his board and the two cards he was holding after his draw step. Morita sent in the Cub and the tapped out Nakamura had no blocks. He was holding Loxodon Warhammer and had life points to spare at twenty. Morita cast Fabricate and looked through his deck to find a Fireshrieker. He played a Leonin Den-Guard and sent back the turn.

Nakamura made a 6/3 flier on the next turn with his Warhammer and sent a chuckle through the rather impressive crowd of spectators. Fireshrieker tapped Morita out when he cast it and put it on his Cub and sent the turn back. Rustspore Ram destroyed the equipment and tapped the Slith. He even had mana open to activate his Sun-Standard.

Morita was barely alive after the attack and when his next draw did not yield Platinum Angel he pulled the plug.

After the match Nakamura showed off his deck with very powerful cards and some eccentric card choices including a Grid Monitor over Annul, Regress, , Goblin Charbelcher, a pair of Gauntlets and other goodies. He defended the card saying that it was better than most people give it credit for in Limited.