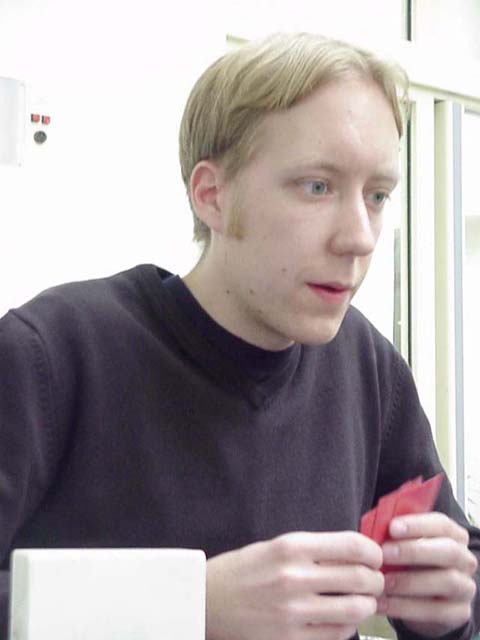 Mattias had just won a tough match against Trey van Cleave and was confident going into this match. They had tested the match-up the previous night and found it to be in the Swede's favor. Mattias was running a red/black deck, whereas Mike had an unusual red/black/green deck, with tons of creatures and Ghitu Fires as it's only non-creature spell.

Pustilnik won the dice roll and decided to play. His opening grip wasn't the best, with a Swamp, and a Forest but three potentially uncastable red cards. Mattias kept his hand as well.

The American played a 2/2 Kavu Titan on his second turn, and Mattias' played an Addle. His choice of green was unfortunate, as it revealed Mike's Plague Spitter, Flametongue Kavu, Thunderscape Battlemage, and Thunderscape Apprentice, but nothing green.

Mike had also drawn a Mountain, which he played as his third land and summoned the Spitter, negating Mattias' two Nightscape Familiars in hand. Because of this, the Swede used a Ghitu Fire to kill the Plague Spitter - but Mike immediately drew another one.

He preferred to play a Thunderscape Battlemage without kicker and keep the Plague Spitter back, hoping that Mattias would play some one-toughness guys. But having tested the match-up, Mike was aware that there were four Nightscape Familiars, Ravenous Rats and some Pyre Zombies in Mattias' deck.

Indeed, Jorstedt cast a Nightscape Familiar, and a Zombie. When Mike attacked the Zombie traded with the Kavu Titan, and then the American played his Spitter. Mattias cast Void to kill both of Mike's creatures, but no card-advantage was gained since his own Nightscape Familiar was also killed. 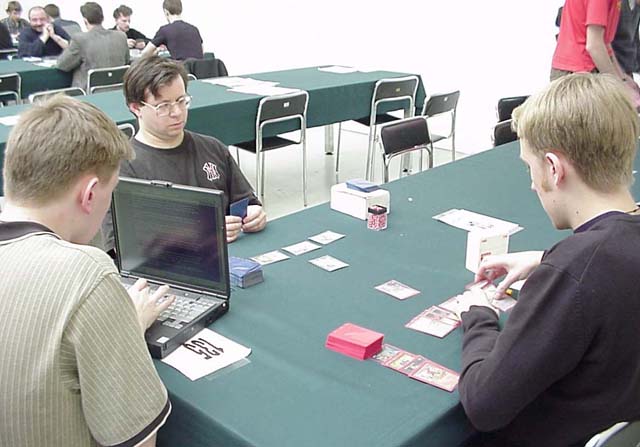 Mike didn't draw anything which could withstand the Zombie and despite only being on six life, Mattias was able to attack repeatedly, while removing Pustilnik's potential blockers, for the win.

Mike chose to play first in the second game as well, and brought in Pyre Zombie and Cremate to counteract Mattias' Zombies. He also sided in a couple of Swamps, highlighting the problems his three-color deck gave him with his mana base. He removed the Thunderscape Apprentices and Yavimaya Barbarians (the Barbarians in particular were hard to cast now that he had took out a Mountain and a Forest to make way for Swamps). Mattias took out Void, Addle, and Ravenous Rats to make room for Scorching Lava, Yawgmoth's Agenda and Flametongue Kavu.

Both players kept their opening draws - Mike was probably a little unhappy with only two lands, but couldn't really mulligan. He used a Ghitu Fire to remove Jorstedt's Nightscape Familiar, and drew his third land.

The Swede removed Pustilnik's Pyre Zombie from the game with a Scorching Lava, and started to gain card advantage. He summoned and attacked with Blazing Specter, which was killed by Flametongue Kavu. 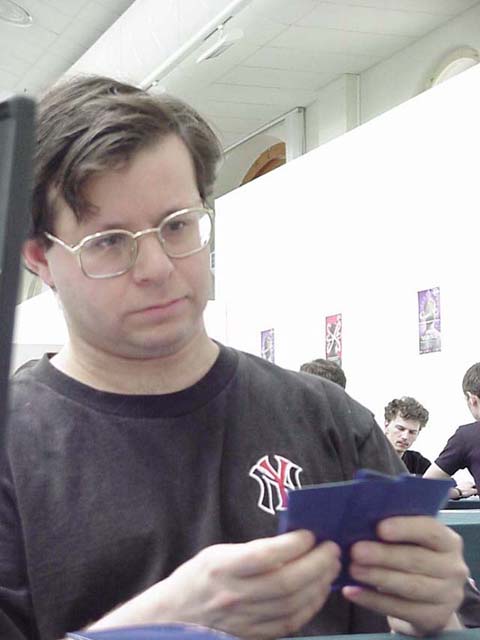 Then Mattias played a Thunderscape Battlemage to strip Mike's hand, and also hold off the Kavu. Pustilnik had kept a Ghitu Fire as his only card in hand, and used it to get an extra hit in with the Flametongue Kavu.

Mattias' draw was better though - he cast a Kavu of his own to leave Mike with no creatures in play, and no cards in hand. Mike drew a Yavimaya Barbarian, but Mattias had another Flametongue, and the Kavus attacked for game.