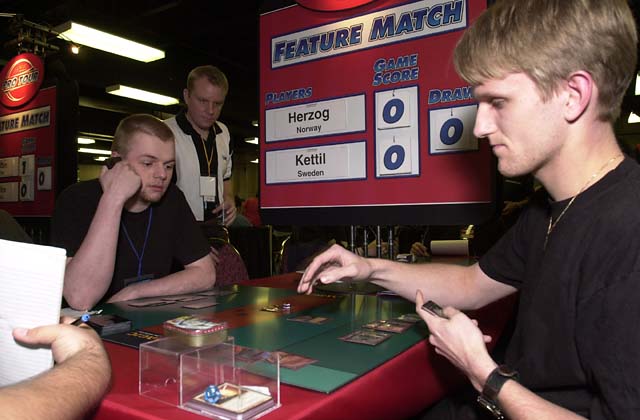 These two Scandinavian stalwarts were cool as ice as they entered the Feature Match area. Both off them are playing black/red/blue with Mattias entering the round at 2-1-1 and Nicolai sitting at 3-1. Mattias and Nicolai are both well known in the European Magic community, and both shouldn't be surprised to find themselves in the Feature Match area.

Nicolai opened with a Tidal Visionary and a Shoreline Raider to match the Shivan Zombie and Phyrexian Infiltrator that Mattias had played out. Nicolai Excluded a Kettil attempt at a Phyrexian Slayer, and the Shoreline Raider and Shivan Zombie clashed in combat, and both found themselves in the graveyard. Mattias was definitely on the offensive, and cast a Pouncing Kavu with kicker and entered the Red Zone. Nicolai used his Tidal Visionary to turn the Phyrexian Infiltrator red, so that he could destroy it with an Agonizing Demise with the kicker before it could get its ability online. Mattias's next draw phase was pretty good, and he instantly played his Blazing Specter, sending it and the Pouncer in to attack. This play made Nicolai comment that "your draw has been pretty good." 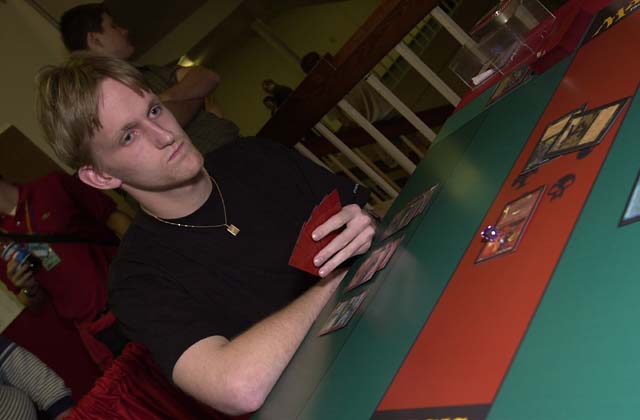 Nicolai wasn't done, though. He played out a Vodalian Serpent and his own Pouncing Kavu, but the Serpent went the way of the Dodo under a removal spell from Mattias. Kettil's Pouncing Kavu came back into the red zone after he played a Mourning on the Pouncing Kavu that Nicolai was using to block. This really affected Nicolai's ability to put up a defense. His next two plays of Faerie Squadron (with the kicker) and Rogue Kavu just weren't powerful enough to deal with the 3/3 first striker, and it ended up doing enough damage that Nicolai was just unable to mount any kind of defense. Mattias still played it safe, even after laying a Phyrexian Reaper, two Vodalian Zombies, and a Nightscape Apprentice. When he eventually came in for the final points of damage, it prompted a playful comment from Nicolai about Mattias's "chicken" status.

Game 2 was an absolute bashing. Mattias played creature after creature, while Nicolai suffered through a hand of spells that just slowed Mattias down briefly. Nicolai did drop a Kavu Scout and a Shoreline Raider, but they merely traded poorly with Mattias's creatures. Mattias forced the bad trades, using a Repulse after damage was on the stack to save one of his creatures, and then using Crypt Angel to bring back the other downed creature, essentially netting an extra card while Nicolai was just having things go to the graveyard. Nicolai was eventually able to play a kicked Vodalian Serpent and protect it with Undermine, but he never drew an answer for the Crypt Angel, and fell quickly to the powerful flyer.