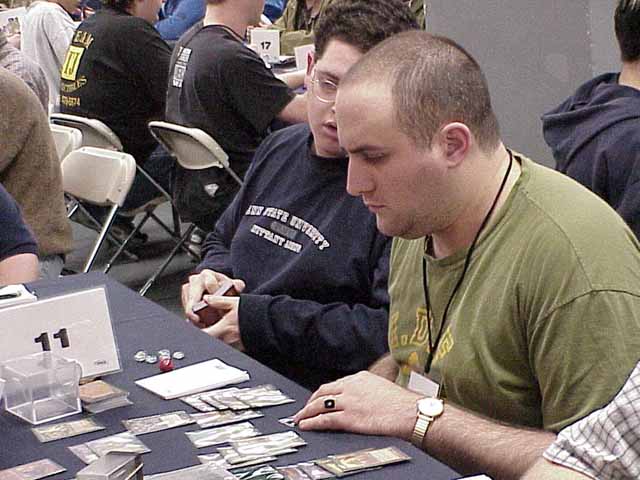 Mike Turian played Stephan Valkyser in the first match, with both men playing blue/black. Stephan started out strong, with two Islands, but then didn't draw another land. On turn five, Mike played Rhystic Syphon with Stephan still at only two lands; unfortunately for Mike, Stephan had a Daze. Stephan found his third land, a Swamp, and played a Chilling Apparition and then a Waterfront Bouncer, which Mike removed from the battlefield with Snuff Out. Mike then played his own Bouncer, and removed the Chilling Apparition during combat with Steal Strength. Stephan tried to mount a defense, playing a Stinging Barrier, but Mike's active Bouncer kept the Barrier off the board, allowing his creatures to set him up for the win. In the second game, Mike's second-turn Waterfront Bouncer is countered with Daze. Stephan started out aggressively, with a Drake Hatchling, but Mike again used the Snuff Out, paying the alternate cost. Mike eventually went on the warpath, casting a Ribbon Snake and a Drake Hatchling of his own, and despite giving Stephan blockers by casting Enslaved Horror, still managed to have too many flyers for Stephan to block. Mike Turian wins, 2-0.

Gary Wise put his green/red deck up against Christian Luhrs, who was also playing green/red. Both players played a third-turn Silt Crawler, and then traded them in combat. Gary played an early Blastoderm, but only managed to hit once before Christian found a Horned Troll to block. Christian also had out Flowstone Armor, which Gary removed with a Desert Twister. Christian eventually found more creatures than Gary, and won game one. In game two, Christian amassed a great ground army, with Wild Jhoval, Snorting Gahr, and his sideboard bomb, Rushwood Elemental, but Gary enchanted a Rushwood Herbalist with Treetop Bracers, and Christian couldn't deal with the unblockable creature. Gary also had out a Belbe's Armor to shunt off the ground attack. In the final and deciding game, Christian plays a second-turn Vine Trellis and a third-turn Darba, but loses it in combat to Gary's Silt Crawler when he enchants it with Flaming Sword. Gary then enchants it with Lure and Treetop Bracers, and Christian can't find an answer. Gary Wise wins, 2-1.

The final match saw Scott Johns and Patrick Mello playing similar white/red decks with extensive Rebel chains. In the first game, both players had out Rebel searchers and large red creatures: Scott with an Ogre Taskmaster, Patrick with Gerrard's Irregulars. Eventually Scott started to win the damage race, preventing some of the damage with his Alabaster Wall, and Patrick had to enchant a Bringer with Cho-Manno's Blessing to play defense. Scott was able to get out Reveille Squad, and the ability to use the Alabaster Wall multiples times forced Patrick to concede the first game. In the second game, Scott again got an early Alabaster Wall, and Toppled a Charmed Griffin. Both players used their searchers exhaustively, with Patrick eventually running out of Rebels to search out of his library, but the extra creatures had Patrick winning the damage race at 16-8. Then Scott drew and played the bomb that hadn't seen play in game one: Power Matrix, and all three of the German players groaned audibly as it hit the table. Patrick tried to counterattack, but Scott was able to send his Ogre Taskmaster through the air in four consecutive turns to win the second game. Scott Johns wins, 2-0, and Team Potato Nation wins, 3-0.