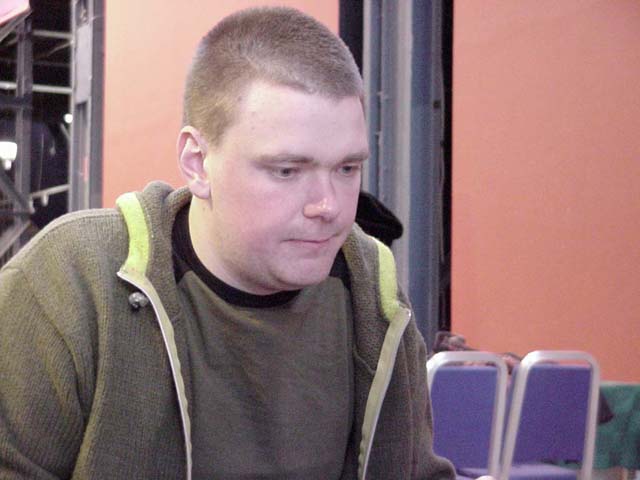 After some technical problems, round five finally could start. At the feature match table, Raphaël Lévy from France faced Sigurd Eskeland from Norway. Eskeland, who chose not to go to Tokyo, had constructed a black, blue and red deck with good creatures and some removal. Lévy had chosen the same color combination.

Sigurd chose to play, and he kept an opening hand with five lands, and he played lands only for the first two turns. Lévy didn't have a quick start though. The Frenchman had a pretty decent hand with lands, an Agonizing Demise, a Rushing River and a Rainbow Crow, but no swamps. He didn't draw any either, so he played a fourth turn Rainbow Crow. Meanwhile, Sigurd got out a Cavern Harpy, bounced the Zombie, replayed it and then he started attacking. Lévy's Rainbow Crow got some Scorching Lava on it, and flew out of the game.

Sigurd had more weenies though. He added a Phyrexian Battleflies to his army and attacked with them all. Lévy, having taken a lot of damage, used his Rushing River to bounce the Battleflies and the Cavern Harpy to Eskeland's hand, but Sigurd showed that he had yet another creature and played a Tower Drake.

Finally, Lévy drew a swamp, and he used it to cast a Firescreamer. The Frenchman had a hand full of removal, but he was getting dangerously low on life. And when Sigurd played a Nightscape Battlemage and used the red kicker to kill the mountain, then things looked really bad. Eventually, Sigurd dropped a Reckless Assault. "It's very good," Lévy sighed, and a turn later, he scooped.

Lévy did some heavy sideboarding in between the games, and he then chose to play first. His opening hand revealed the change - he had turned his deck into a five-colored deck instead of the red/blue/black version. 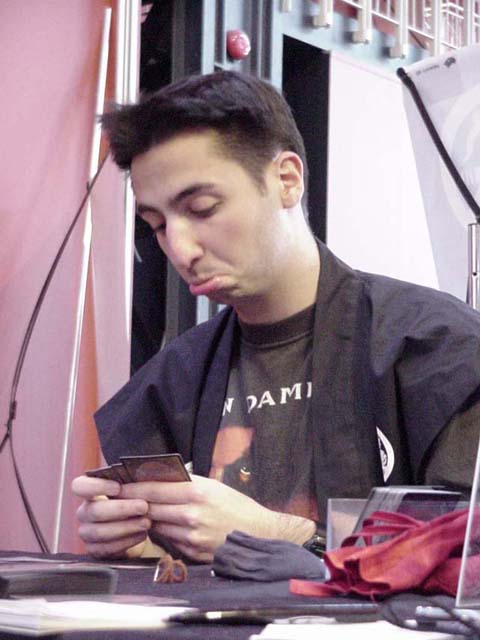 The Frenchman cast a first turn Tidal Visionary, but it was Singed away by Eskeland. He then played a Sunscape Familiar, which surprised the Norwegian, and when Lévy then dropped a Tinder Farm, he chuckled when Sigurd looked slightly puzzled. Sigurd just went about doing his stuff though. He played a Tower Drake and started attacking.

Lévy got out a Shoreline Raider while Eskeland dropped a Shivan Zombie. Then Lévy failed to play fifth turn land. Without a fifth land, he was unable to play the Angel of Mercy in his hand, and without a swamp, he was unable to play Probe with kicker. He had an Armored Guardian though, but chose to play Probe without the kicker instead, drawing a forest, a plains and a Reviving Vapors. Thinking for a while, he then chose to discard the two lands instead of keeping one of them.

Sigurd continued to play creatures. He summoned a Phyrexian Reaper. Again, Lévy failed to draw a land, so he chose to play his Armored Guardian. Then, Sigurd played one of his bombs, Tahngarth, Talruum Hero.

But Lévy had some good cards as well. Again failing to play a land, he got out a Questing Phelddagrif, but it didn't really help him against Sigurd's attackers and he soon found himself at six life only, facing a kicked-up Duskwalker in addition to the rest of the creatures. Sigurd then cast his Nightscape Battlemage, targeting Lévy's only island.

In response, Lévy tapped the land and sacrificed it to play a Rushing River, returning Tahngarth and the Duskwalker to Eskeland's hand. Going down to four life after Sigurd's following attack, he realized his only hope was to go extremely offensive and then draw something. Lévy attacked with his Questing Phelddagrif and then he sacrificed his sac-land to play his Angel of Mercy, gaining some very important life. But Sigurd re-cast his Duskwalker. Although Lévy got Sigurd down to nine by attacking with his Angel and the Phelddagrif, the Norwegian never lost control of the game, and Lévy scooped a turn later.