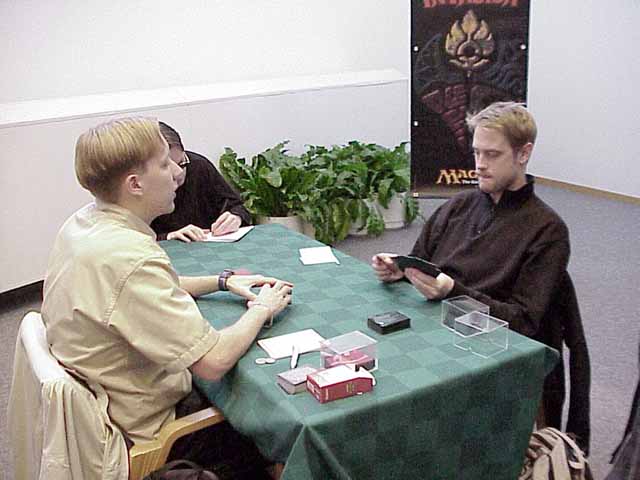 Round 5 saw the pairing of two Swedes from Gothenburg, Richard Österberg and Mattias Jorstedt. Jorstedt finished 5th in the '99 European Championships but Österberg finished 4th this year. Invasion is all about allied colours so Jorstedt's deck was a departure in that it was red/black/white. Österberg went for green/white/blue to use the common but powerful creature tappers.

Jorstedt won the coin toss and decided to play first. He started quickly with Spirit Weaver and Vicious Kavu, forcing Österberg to play a Benalish Emissary without kicker to slow down the assault. He backed it up with a Stormscape Apprentice but that was all he laid for a while as Jorstedt applied pressure with Phyrexian Slayer and then Ancient Kavu. In search of something useful Österberg cast Fact or Fiction and found only his second Fact or Fiction. He couldn't cast that in the next turn as he needed to put Wings of Hope on the Emissary and leave mana open to tap a creature. Jorstedt Exotic Cursed the airborne Emissary, which while not killing it effectively turned it into 0 power wall. Strangely Österberg chose to block the Slayer with the white Emissary, forgetting that Slayers chew up white cards for breakfast. The second Fact or Fiction was better and Jorstedt chose to give Österberg 4 reasonable cards over a Shackle. The reason for this became apparent a few turns later as when Österberg overextended with creatures to try and come back into the game Jorstedt was able to cast Rout to devastating effect. Österberg was able to save his Jade Leech with a Sunscape Apprentice and then enchanted it with an Armadillo Cloak to claw back some life. Jorstedt was able to shackle it and then bring out a Trapper. This shut down Österberg's only other creature while Jorstedt attacked with his, finally burning Österberg out with Tribal Flames.

Game 2 saw Österberg playing a radically different deck. The first land he laid was a swamp and it soon became apparent the forests and plains had been switched for swamps and mountains. He had decided to switch to a more aggressive deck to compensate for Jorstedt's Rout. To start with it looked as though it would work as he used Reckless Spite to clear away Jorstedt's first two monsters while attacking with a Reaper. Jorstedt came back in by using Plague Spores to remove both a Tower Drake and Österberg's only source of red mana. Then, when Österberg laid a second creature, he cleared the board with Rout. The game moved back and forth as Österberg recovered the Reaper and Jorstedt found creatures with his next few draws. Österberg slowed Jorstedt down with Barrin's Spite while Jorstedt made fliers, including a large Crypt Angel to continue the pressure. Österberg used both Fact or Fictions to find something useful but the Fact of it was he was in trouble. Time was running out and so was his library. He tried coming back with a Blazing Spectre as Lightning Darts and Annihilates tried to settle the battle for the skies. Österberg was on too little life though and eventually he fell within range for Jorstedt to bury him under Scorching Lava.