Round 5 Feature Match: Rite Back At You!

Australia's Jeremy Neeman is perhaps best known as Luis Scott-Vargas's professional nemesis. The two have met seven times at top-level play, and Neeman has won five of them. Despite winning a pair of Grand Prix events, Neeman is still looking for that one big finish to put an exclamation point on his resume. That's making this weekend doubly important. Even if he he doesn't Top 8 this weekend, a strong performance would lock up the APAC slot at the Players Championship for him this summer.

This round he face off against Pat Cox, who was a relative unknown until his Top 8 at Pro Tour Nagoya last year. For pros in the know, this came as no surprise. Cox has quietly built a reputation as a master in the making. This weekend he's playing a reanimator deck designed by Pro Tour Champion David Sharfman, ingeniously named "Raisin' 'Brand". 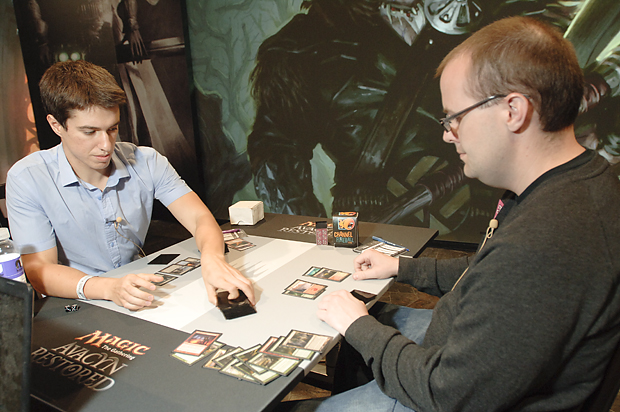 While Pat Cox is piloting a deck with a sweet name, Jeremy Neeman is hoping to lock up his invitation to the Players Championship.

Neeman didn't take long to send his first hand back. He kept his six, and they were off.

Cox led with Avacyn's Pilgrim, then set up a big turn with Faithless Looting, getting rid of Unburial Rites and Gisela, Blade of Goldnight. He played a second Pilgrim, and passed. Neeman dispatched one of them with Pillar of Flame. Cox Mulched some lands to hand and hit for one. Neeman got rid of the other Pilgrim with Devil's Play.

Neeman frowned. "It's going to resolve." 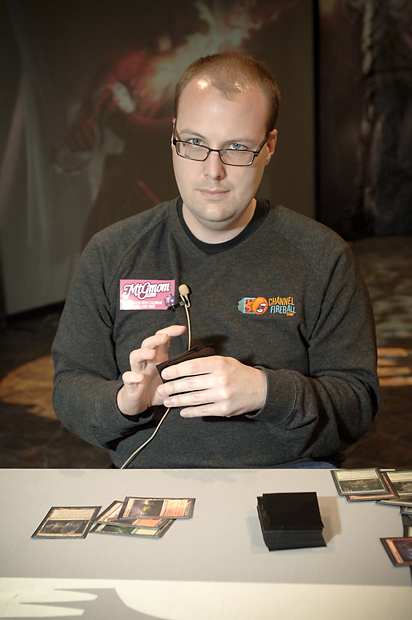 I heard turn four Gisela, Blade of Goldnights are nice.

Neeman laughed and shook his head. "Yeah, that was a pretty good draw. Try not to do that again."

Cox took one mulligan, keeping his six. Neeman led with Evolving Wilds, getting an island after Cox played Forest and Avacyn's Pilgrim. Devil's Play took care of it, but Cox had a replacement on the following turn. After Neeman played Fettergeist, Cox dropped Huntmaster of the Fells. Neeman had Pillar of Flame, and a second Huntmaster put him even further behind.

What he really needed was Rolling Temblor, but it was nowhere to be found. He hit for three in the air and added Dungeon Geists to his team, locking down Cox's Huntmaster of the Fells. 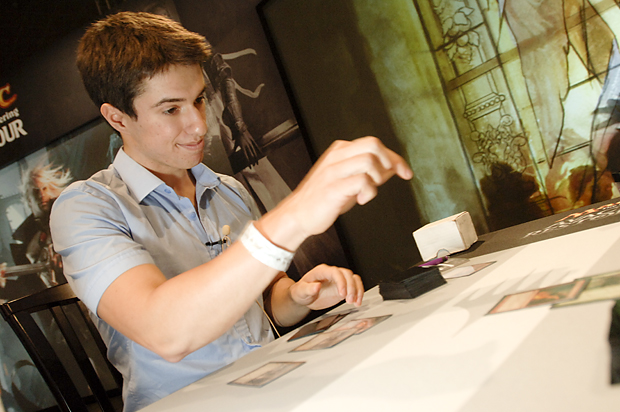 Neeman attempts to battle his way through multiple Huntmasters.

Cox drew and considered things. He eventually settled on Restoration Angel, freeing his Huntmaster, getting him another wolf, and putting a huge blocker in the air. Meanwhile, Fettergeist was taxing Neeman's already-constrained mana. He tapped two for Desperate Ravings, losing a land and playing another one, then passed the turn.

Cox sent his wolves and angel in. Neeman's fliers blocked wolves, and a post-combat Bonfire of the Damned for two left Neeman at 10 and with no board. He untapped and played Tamiyo, freezing the Angel. The rest of Cox's squad killed Tamiyo and he passed the turn to flip his Huntmaster. Neeman was down to just 8.

He untapped and played Desperate Ravings into Hinterland Harbor and a Huntmaster of his own, clawing his way back to 10. Cox's Huntmaster flipped back, and he attacked with his Angel and a wolf token. The wolves traded, and then came a post-combat Sigarda, Host of Herons. Neeman looked at one more card, then conceded.

4 Huntmaster of the Fells 2 Gisela, Blade of Goldnight 3 Sigarda, Host of Herons

4 Huntmaster of the Fells 2 Gisela, Blade of Goldnight 4 Griselbrand 2 Tree of Redemption 3 Sigarda, Host of Herons 1 Angelic Overseer 2 Bonfire of the Damned
75 Cards

4 Fettergeist 4 Huntmaster of the Fells

4 Huntmaster of the Fells 3 Bonfire of the Damned 3 Tamiyo, the Moon Sage 1 Tree of Redemption
75 Cards