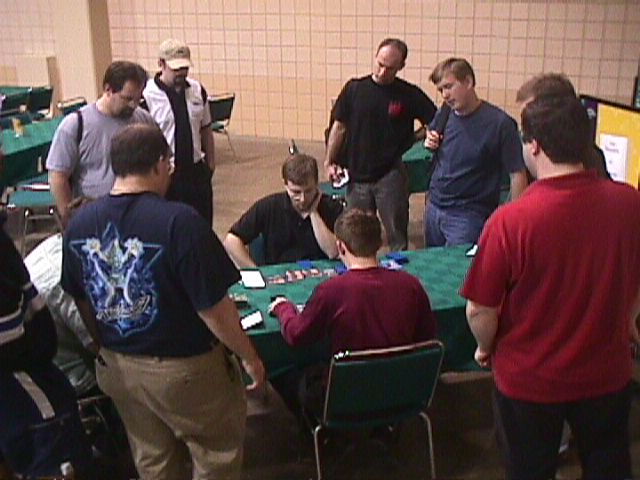 Rob Dougherty vs. Brad SwanRob Dougherty of YMG fame faced off against PT-Barcelona Top 8er Brad Swan in a round 5 feature match. Dougherty, fresh off his Top 16 finish in New Orleans looked to continue his hot streak.

Brad Swan dominated the die-roll metagame, rolling a 12-sided die to a wildly successful "12," while the die's owner, Rob Dougherty managed a meager "1." "Make sure you mention the die roll," joked Swan. Okay Brad, I got it.

On his first turn, Swan got his Peek on, and Rob showed mono-red with 4 Mountains, Magma Vein, Ember Beast, and Firebolt. While Rob was casting an Ember Beast, Swan showed that he also is very good at another limited skill; drawing all three colors of mana on the first three turns. Dougherty finally got his second color of mana, black, and began to build some card advantage by Gravediggering his fallen Ember Beast. Swan missed his fifth-turn land drop but showed excellent defense in the form of Puppeteer and Blessed Orator, while Repelling, and then Syncopating Rob's third Ember Beast. 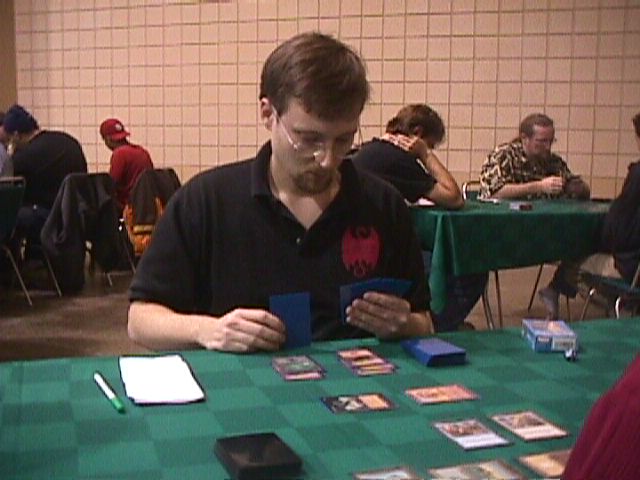 Rob DoughertyThe first game dragged as the board was nearly stalled, with Swan keeping control as Dougherty tried to build up some creatures. After several uses of Phanatog, Swan got to threshold; killed an Ember Beast with a Patriarch's Desire and cast a big Dirty Wererat. Swan finally drew a board-buster, Cephalid Broker. Over the next few turns he rooted through his library and turned up Morbid Hunger, and plenty of control to win with his Wererat and a Caustic Tar.

Swan once again dominated the mana draw with blue, white, and black mana in the first three turns, used Innocent Blood to kill Dougherty's Ember Beast and cast a Standstill. Rob didn't fear Swan's Standstill, and cast a Famished Ghoul and gave Swan the three cards. With cards filling his hand, and what seemed like plenty of time, Swan started out with defense again with Blessed Orator, Puppeteer, and then a second Puppeteer on successive turns. 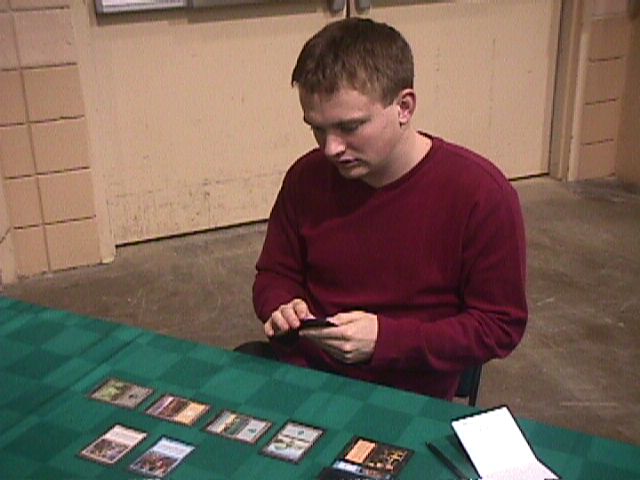 Brad SwanDougherty, down on cards, and threats, managed to deal with the Orator with a Firebolt and Patriarch's Desire, and Firebolt out of his graveyard made short work of a Puppeteer. After several land draws, the Bostonian Dougherty appeared to have some offense rolling with a Dirty Wererat on threshold. Dougherty, now flanked with teammates David Humphreys and Chad Ellis, finally got to 9 mana to cast Valley of Boulders, attempting to take out two of Swan's three creatures. Swan, being the tight player that he is, remembered the Embolden in his graveyard cast nearly 20 minutes ago, saved his creatures, and swung back to win on the following turn in extra time.