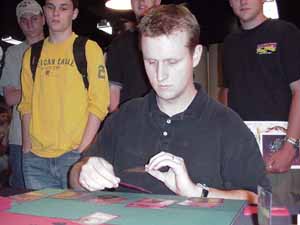 England’s Sam Gomersall found himself on this side of the Atlantic for a vacation coinciding with Grand Prix – Detroit, and so could see nothing wrong with running it. He’s playing a black-white control deck with more Wrath effects than you can shake a really big stick at. Across from him sits Bob Maher, recently crowned the last Master’s Champion, and has done absolutely no testing for this weekend. He is with a red-white control deck that looks like a Slideless Astral Slide deck.

Gomersall sent back a hand of black spells and two white lands, only to be rewarded with a terrible one-lander. He went to five and still only saw one, but he had to keep. Maher sent back his first seven as well, but took the forbidden peek. His next six were fine.

While Gomersall struggled to find a second land, Maher played three lands and cycled a Renewed Faith. Gomersall found a swamp and cycled away Eternal Dragon. With a handful of cyclers, he was slowly going to be able to pull out of things. While he went through two Vengeances and a Wipe Clean, Maher found his way to eight mana, enabling Akroma, Angel of Wrath. It hit once before Gomersall shut it down with Pacifism.

He dug out a plains with Eternal Dragon in response, then Gomersall exchanged the rest of his hand for four more. He regrew his Dragon and found a Rift waiting for him. He played it only to see it Wiped Clean. Maher worked his dragon again, and found another Rift waiting for him. This time Akroma’s Vengeance got rid of it. Maher tried playing his dragon as a 5/5 beater instead of Rampant Growth, but Gomersall had Pacifism ready.

Finally it seemed like Maher was out of action. He cycled a cave and gave it back to Gomersall. He tapped out for a Twisted Abomination. Maher tapped out to cycle Decree of Justice, making nine eager soldiers. His swing put Gomersall at two. Gomersall cleaned up with Infest. Maher made a Silver Knight and shot down the incoming Abomination with Wing Shards. Another Infest took care of the Knight. Maher Vengeanced away the Abomination and dropped another Knight.

Gomersall shook his head. He regrew his Dragon and played a Graveborn Muse. An end-of-turn Starstorm for four cleared the way for the Knight, giving Maher the game.

“That was quite a game, considering double-mulligan, on the play.” – Bob Maher, Jr. 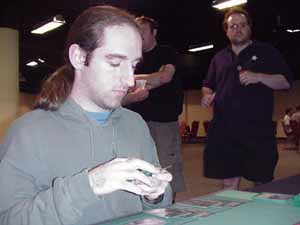 Maher played an early Lightning Rift, quickly Wiped Clean by Gomersall. Both players started to accumulate mana, plainscycling their Eternal Dragons. Maher played another Rift. Before things could get too crazy, Gomersall came down with Withered Wretch to remove Maher’s from the game. It swung in, but Temple of the False God gave Maher plenty of mana to cycle Decree of Justice, make three soldiers, and shoot down the Wretch. The men hit, and Maher gave it back to Gomersall.

Gomersall wasted no time tapping all his lands to play Decree of Pain. Maher asked for a moment. He cycled away a Vengeance, shooting Gomersall in the face, then Starstormed for one to keep him from drawing three. He untapped and threw down Akroma, taking Gomersall to seven. Gomersall had a Vengeance at the ready.

Maher drew his card and said go. Gomersall thought, then brought back his Dragon, and tapped out but one for Graveborn Muse. Maher cycled Decree of Justice to make six men. He untapped, holding Decree of Annihilation to seal the game, but found Akroma waiting at the top of his deck, handing him victory immediately.