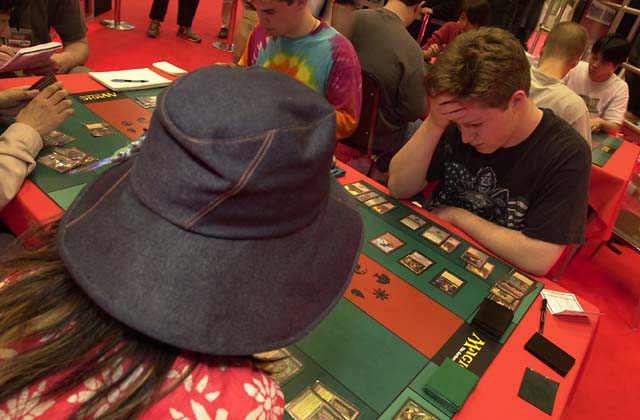 Top Japanese player Satoshi Nakamura is not only celebrated for his exotic hats, but for his impressive resume as well. He has four Grand Prix Top Eights in the last year alone. Ben Rubin is no slouch either. Today he sports his trademark Superman T-Shirt, the same that helped him win the Chicago Masters.

Both players accellerated thier decks on turn two, Nakamura with a Utopia Tree and Rubin with Nightscape Familiar. Nakamura followed that up with Collective Restraint. Rubin set him back by removing the plant with Ghitu Fire.

Rubin played out a Blazing Specter, but didn't have enough mana to pay the Restraint's cost. This let Nakamura hold his next draw back to protect his pair of dragons. He discarded an Island to the Spectre's first hit, but discarded a Rith to the second. He held back on a Ghitu Fire to deal with the Specter permanently. He was rewarded with a Fertile Ground off the top, and burnt the flier.

Rubin drew and ended his turn. Nakamura summoned Rith. Rubin played up his trepidation, sighing and saying "It's only a Rith," but he was ready with Flametongue Kavu and Urza's Rage in hand. He even had a Pyre Zombie at the ready. Nakamura cast Reviving Vapors, looking for answers but finding only a Utopia Tree. Rubin removed it with the Zombie.

Rubin couldn't believe it. He literally held his head in his hands as he surveyed the cards. Nakamura eventually got the Draco and Restock. Rubin forced him to discard the green card. Nakamura drew, and tapped out for the mighty Draco. 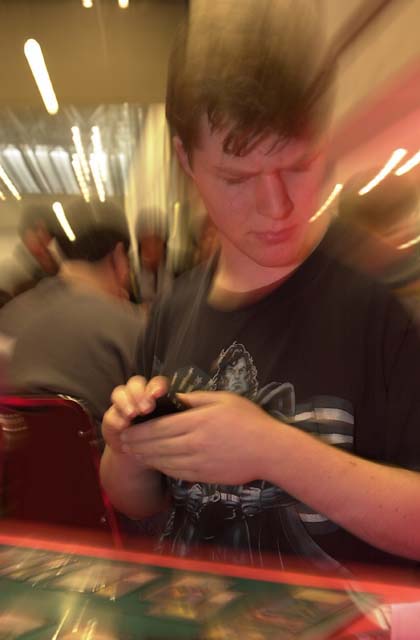 Rubin thought for awhile before summoning a pair of kicked Skizziks. Next turn, his nine mana would be enough to attack with both. Nakamura Harrowed into his fifth basic land type, putting a stop to that, but Rubin held a tenth land. He tapped out to knock Nakamura to two. Nakamura drew, and conceded.

Rubin got the game underway with an Addle for blue showing two Collective Restraints, Fact or Fiction and Lobotomy, as well as two more land. Rubin chose to remove a Restraint. Nakamura played a Star Compass, and Rubin thought hard before deciding to Addle him for Blue again, catching the other Restraint.

Nakamura drew and passed the turn. Rubin made a Blazing Spectre and attacked. Nakamura played Fact or Fiction before it hit, showing off and incredible set of cards: Two Reviving Vapors, two Routs and a Rith.

Nakamura ended up with the Routs and Rith. He dropped and Island to the Spectre, untapped, and Routed it. Rubin played another, costing Nakamura a Forest. That, too, was destroyed by Rout. Finally Rubin got to keep a creature in play: a Nightscape Familiar. Soon he added a Shivan Zombie and began the beatdown.

Nakamura Lobotomized him next turn, stripping his hand of two Mage's Contests and leaving him with Nightscape Familiar. He played it next turn. Nakamura played a threat of his own, the Rith he'd drawn earlier.

Rubin topdecked the Terminate like it was nothing at all.

He thought long about his next play, counting Nakamura's graveyard twice. He decided to go for the gusto, dropping Blazing Spectre and sending the whole team. Nakamura wasted no time in displaying his third Rout, at instant speed.

He went on to Restock the Reviving Vapors and Rith. Rubin was unfazed. When he played out the dragon next turn, Rubin was ready with Void for six. Nakamura showed the Vapors and a Lobotomy. He operated next turn, but Rubin held only a Swamp. Rubin drew and passed the turn. Nakamura's Vapors turned over three Forests.

Nakamura drew another Lobotomy and played it. Rubin Ghitu Fired him for three in response, and flashed the Swamp again.

A few turns passed while Nakamura developed his mana and Rubin drew no threats. The silence was broken by Nakamura's main-phase Fact or Fiction. The cards shown were Harrow, Fertile Ground, Collective Restraint, Elfhame Palace and Draco.

Rubin said "Well, this'll be hard," pushing Draco as far from the other cards as he could. Next to him, Brian Kibler looked over and quipped "Well, it is only 9/9." Nakumara thought for a minute, and put the dragon in his graveyard. He played out Harrow and Collective Restraint.

Rubin made no play next turn. Nakamura cast Restock, getting back a pair of Vapors. Rubin forced his hand with Void. The first Vapors hit Fertile Grounds and a Utopia Tree. The second, Collective Restraint, Fact or Fiction and Reviving Vapors. He chose the Vapors and the Tree, but lost the Vapors to the resolution of Void.

Rubin kicked up a Skizzik. The Tree was shoved in the way to soak two points of damage. Nakamura made another. Rubin sent the Skizzik again, but Nakamura had Ghitu Fire to remove it. Rubin's Nightscape Familiar tried to act like a replacement. 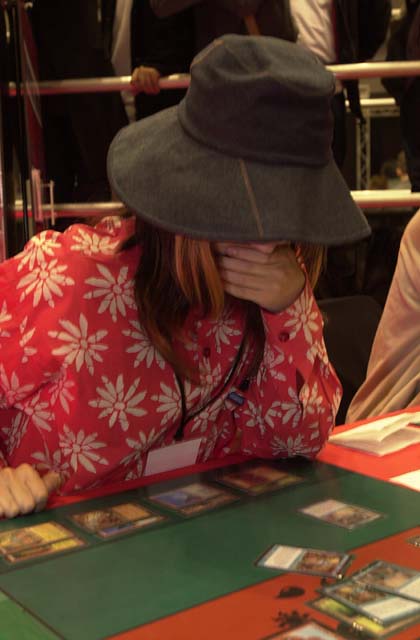 Nakamura found another Restock, this time getting Ghitu Fire and Draco, and summoned the beast. Terminate almost couldn't get out of Rubin's hand fast enough. Nakamura had 18 mana available, nearly enough to kill the unscathed Rubin. Rubin played Pyre Zombie to kill the Tree. After all that searching, Nakamura only had nine cards left in his library. He Harrowed out two more land.

Rubin regrew his Pyre Zombie and played it out, hitting Nakamura for one with his Familiar. Nakamura burned him for fourteen at the end of turn, hoping to draw a Draco in the sooner portion of his remaing cards.

Two turns passed with Rubin sending his troops at Nakamura. At three life he slid the top card of his library across the table and flipped it into his line of sight. He threw it facedown onto the table and said simply "You win." Turning over his last three cards, Draco was at the very bottom.