Round 5 Feature Match:
Something Wicked This Way Comers

Two time Pro Tour Top 8 competitor and resurgent pro Andre Mueller sat across the table from Adam Yurchick, a strikingly consistent American Pro who has flown a bit under the radar since his win at Grand Prix Houston in 2010.

Going into the fifth round, both players found themselves at 3-1 piloting blue decks that have little in common with each other beyond the fact that they both contain basic Islands and Ponders.

Yurchick is playing a fairly traditional White-Blue Delver deck, while Mueller is playing a deck that has affectionately come to be known as Something Wicked this Way Comers, in honor of the deck's designer, Hall of Famer Alan Comer.

Mueller's deck uses Grand Architect and Heartless Summoning to help power out quick copies of Myr Superion, Wurmcoil Engine, and other assorted artifacts (like Contagion Engine, Steel Hellkite, and – wait for it – Geistcatcher's Rig) that he can tutor up with Treasure Mage. 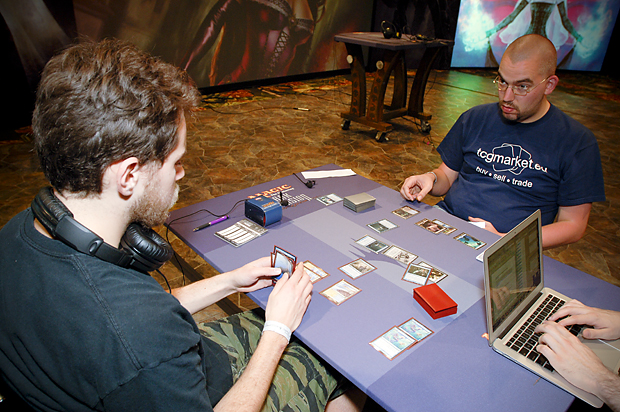 Both Andre Mueller and Adam Yurchick have a habit of flying under the radar to successful finishes.

Mueller won the roll, but had to mulligan while Yurchick kept his opening seven. Both players started off the game with Ponders to help craft their hands, but it was Mueller who made the first proactive play of the game.

"I guess it's Mana Leak time," said Mueller as he attempted a Grand Architect into Yurchick's two untapped lands.

"Aww sweet!" said Mueller, as he immediately used his Grand Architect to power out a Myr Superion.

Yurchick Pondered in search of something that could get him back into the game, but all that he could find was a Delver of Secrets.

While Yurchick had to be content with casting a 1/1, Mueller further built up his board with a Wurmcoil Engine.

Yurchick had a couple of Snapcaster Mages to get additional uses out of his Ponders, but he couldn't find anything of use. He quickly found himself down a game to Mueller's explosive Blue-Black deck. 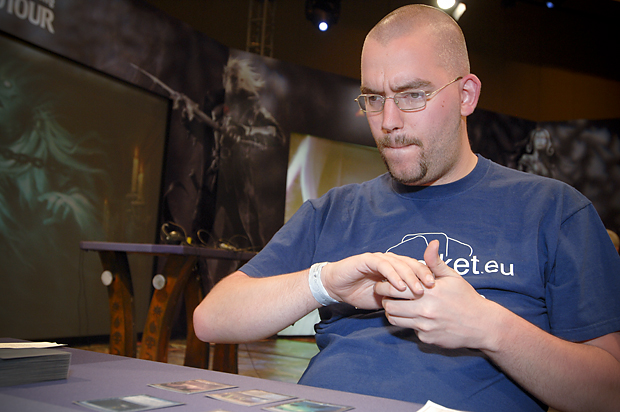 Mueller: "Alan Comer played this deck at Worlds, and he went 2-3-1 with it. I don't know why he didn't do better, the deck seems so good!"

Yurchick got off to a better start in the second game with a Mana Leak to counter Mueller's turn two Heartless Summoning, and a Geist of Saint Traft to put Mueller under some serious pressure.

Yurchick's lead wouldn't last for long as Mueller exploded on his third turn with a Heartless Summoning, a Myr Superion, and a Phantasmal Image to legend rule away Yurchick's Geist of Saint Traft.

This doesn't come up every day, but if you copy an artifact with Phantasmal Image, it won't live long if your opponent has a Grand Architect.

Even though Mueller had gotten off to a fantastic start, Yurchick was able to turn around and demonstrate why Delver decks are just so prevalent in Standard right now.

A couple of Snapcaster Mages, a Runechanter's Pike, a well timed Dismember, and a Revoke Existence later, and suddenly Mueller found himself in need of a strong card to pull back into the game.

Contagion Engine seemed to be just that card, but Yurchick's third Snapcaster Mage, flashing back Revoke Existence, again put the American Pro in the driver's seat.

But the hits just kept coming for Mueller, as he was able to stick a Wurmcoil Engine that not only forced Yurchick to chump block it every turn, but also gave him a huge cushion in the race against Yurchick's Moorland Haunt tokens.

It looked like Mueller had the match all but locked up when Yurchick found a second Revoke Existence and a fourth Snapcaster Mage (flashing back the Revoke Existence) to again claw his way to a lead. 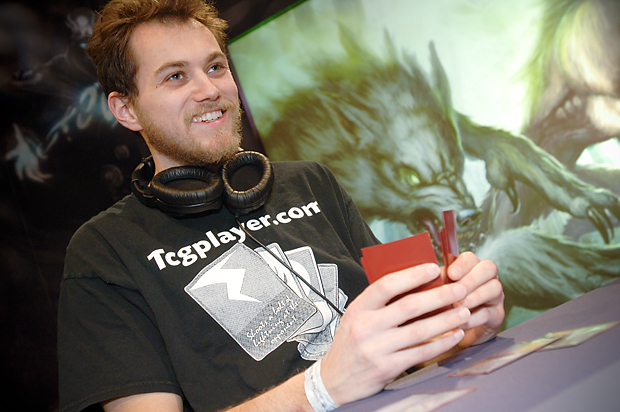 Adam Yurchick keeps his head in the game, as Snapcaster Mage and Revoke Existence keep him on even footing against Mueller's monsters.

Mueller's deck continued to cough up good threats, as he found another Myr Superion that traded with Yurchick's entire army of spirit tokens.

After spending much of the game throwing haymakers back and forth at one another, the two players found themselves with next to nothing left in the tank, allowing Mueller to ultimately scratch his way to victory by attacking with a couple of Grand Architects.