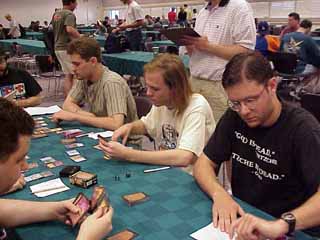 This match pitted 3-0-1 Team Antarctica featuring Jon Finkel and the OMS Brothers against an upstart team from the Pittsburgh suburb of Washington, PA., featuring Geoffrey Baron and Jason Seffas and the often qualified but never actually attended the Pro Tour Anthony Florian, who came in with zero byes.

Finkel, off his Nationals win, faced off against Anthony. Welcome to the Pro Tour, Anthony. They both played Waterfront Bouncer early, but Finkel had black as well as blue in his deck and used black removal to kill the opposing Bouncer. Anthony was mono-blue and was scraping for a way to deal with Bouncer. Anthony had to go beatdown against Finkel's Piracy to try to win before the card advantage could come through. He played Cloudskate, Gulf Squid and Crenellated Wall, and Finkel answered with Sever Soul on the wall, while the Skate faded away. Finkel played Spineless Thug and Misshapen Fiend and was drawing 2 cards a turn. Finkel loves his Ophidians. Then on turn 10, Finkel played Avatar of Woe with a Counterspell backup and it was on to game 2.

Finkel went to the board for Rootwater Commando over Outrigger, while Anthony added a Hoodwink to go up to 41 cards. Anthony started strong again with Bouncer, Airship and Drake Hatchling. Finkel Vicious Hungered the Bouncer and drew his Commando, which is much better than Outrigger against Anthony's air force. Finkel then cast his favorite Prophecy spell Withdraw and got right back in the game, returning the flyers to Anthony's hand. Anthony recast the Airship, but Finkel played a Plague Witch and killed it, discarding Avatar of Woe. With Finkel stuck at 5 mana, the Avatar wasn't coming out any time soon. Anthony then played the Hatchling and Finkel countered it. Finkel plays a Brute that is Foiled, and then Sever Souls the Balloon Peddler, also countered with Rethink. Finkel outlasts Anthony's Jolting Merfolk by Dominating Anthony's fresh Cloudskate and combined with Finkel's own Jolting Merfolk, spells Anthony's end.

This was an interesting matchup, clearly in Finkel's favor as he had great black support cards like Snuff Out, Maggot Therapy, Hunger, Avatar, etc, to go with blue cards of the same caliber of Anthony. Anthony gave the other 4 colors to his teammates who need to Rally back to beat the OMS'. 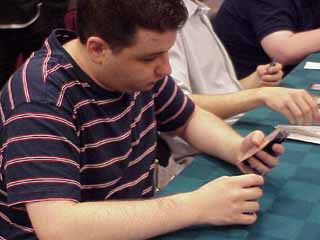 The Dan OMS/Geoff Baron was the next match to finish, which is surprising given Dan O's slow, methodical and sometimes erratic play style. This match features Red/Green against Red/Green, typical of a matchup in seat A. Geoff starts with Silt Crawler, Spidersilk Armor and Kris Mage, while Dan O slows things down with a Rib Cage Spider. On turn 4 Dan O can cast Snorting Gahr or Blastoderm and makes the unorthodox play of leading with the Derm and then playing the Gahr next turn. Geoff answers with Wild Jhoval and Dan O runs the Blastoderm into the two �'s taking down the Jhovall. Geoff then plays his bomb - Ancient Hydra, but Dan topdecks Seal of File. Dan continues to attack with the Gahr and Geoff concedes when Saproling Burst hits. I think this was an error. At least give Dan the chance to screw up with the burst. He just might. 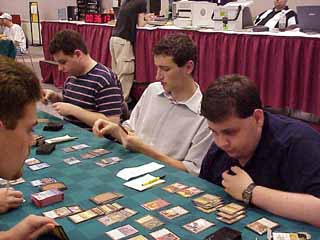 They do typical Green vs. Green sideboarding with Dragonflys and Deadly Insects. Dan opens with the defensive Kris Mage and Dragonfly, while Geoff plays Fault Riders and trades with the Dragonfly. Dan plays the underrated Rushwood Herbalist and SilverGlade Elemental while Geoff answers with Wild Jhoval, Thresher Beast and Spidersilk Armor. Then Geoff sends the Beast at Dan and Dan blocks with his Herbalist, Elemental AND Kris Mage to kill the 4/5. Finkel and I are bewildered why he blocked with the Mage, as a combat trick like Flaming Sword or Invigorate take the whole team down anyway and keeps the Beast alive. So rather than just losing a card from hand and a land from play, Dan O flushes his Kris Mage as well. But Dan O rallies back with a Saproling Burst, but this time Geoff wants to make Dan use it right. Dan beats down with it, but Geoff holds it off and outlasts it, going low on life though. Then Geoff draws his Hydra and kills off the annoying Herbalist. Dan plays Spidersilk and Geoff answers with another Spidersilk of his own, stalemating the ground. Then Dan draws Squallmonger and finishes Geoff off, securing the match for Antarctica.

Antarctica, always weary of tiebreakers, wants a sweep and Steve O was in a dogfight. Steve lost game 1 to Jason's swarm of Rebels while Steve couldn't draw any of his searchers to keep up. A rare play error by Steve O, forgetting that he could Witness a Greel's Caress, cost him any chance of a come back in game 1. Game two looked bad for Steve again, but at least he had a Rebel searcher of his own to keep up. Jason's Noble Purpose looked like it would win the race for him. But Steve O continually used his Charm Peddler to prevent damage and prevent Jason from gaining life. SteveO eventually won with his Flyers. 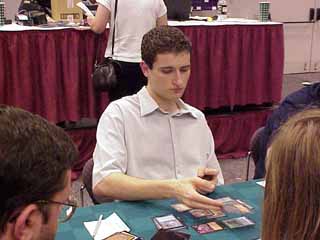 Game 3 both players opened with Rebels, but Steve's superior Glider engine looked like it would win, until Jason drew Noble Purpose/Puffer Extract. But when Jason heard of his teammates demise he basically tanked it and stopped attacking, given Steve O the tiebreaker advantage they wanted.

There were lot of close mirror matches, and while the OMS' made some errors, their opponent's could not capitalize and Antarctica was in day 2, while the All Stars were struggling to do it.