Two years ago, at the Legacy Grand Prix in Ghent, it was Timo Schünemann from Germany who ended up hoisting the champion's trophy. While he surely wouldn't mind a repeat performance, at this tournament, after two byes, he started with a win and a loss. Facing him this round was Swiss player Luca Rozza, likewise 3-1 after two byes.

Rozza was playing UWR Delver, Schünemann once again brought his trusted Storm deck, basically the same that had got him his Grand Prix title in 2012. In this match-up, Rozza would have to walk the tightrope of applying pressure with his small creatures while also keeping Schünemann's combo in check with his counterspells. Schünemann, however, would do his best to power through any such defenses with the help of Duress and Gitaxian Probe/Cabal Therapy.

The game started with Delver of Secrets for Rozza, who then lost most of his spells to the deadly combination of Gitaxian Probe and a pair of Cabal Therapy. This left him with just a Spell Pierce for defense. Duress took that one too, but Schünemann was not yet ready to attempt his combo, instead settling for Sensei's Divining Top.

Meanwhile, Insectile Aberration and a Lightning Bolt took Schünemann to 8 and a Wasteland blew up one of his lands. Rozza's Gitaxian Probe revealed a hand of Lion's Eye Diamond, Cabal Ritual, and Infernal Tutor, not yet quite enough for Schünemann to start his engine. 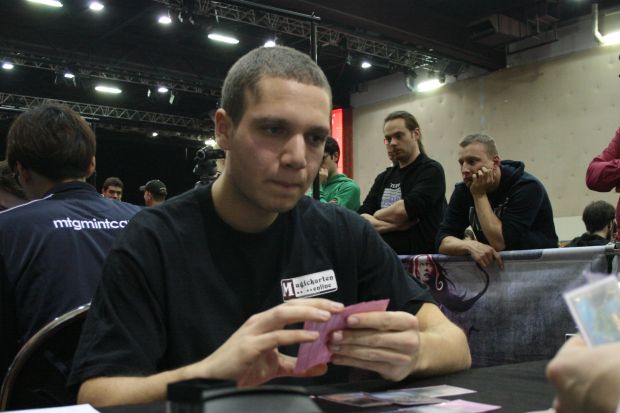 Schünemann started with a mulligan, Rozza with a Delver of Secrets. This time, Schünemann had no early discard spells and Rozza had two Spell Pierces, enough to use one on his opponent's Brainstorm. To make matters worse, Rozza took a peek at Schünemann's hand via Gitaxian Probe and saw the way was clear for Meddling Mage which he cast and set to forbid Infernal Tutor.

With Rozza tapped out, Schünemann still saw his chance, casting Brainstorm and Ponder to shuffle away two Infernal Tutors, Lotus Petal, and Carpet of Flowers. At the beginning of his turn's second main phase, Carpet added two mana to his pool; he cast Brainstorm ... and then a frown. He passed the turn.

Rozza attacked for 5 again, cast Rest in Peace, and Schünemann, knowing what cards were stuck on top of his library, conceded.

This time it was Rozza's turn to mulligan. He began the game with five cards in hand—two lands, Lightning Bolt, Daze, and Red Elemental Blast—but by the end of turn one was already down to four, thanks to Schünemann's Duress on Red Elemental Blast. 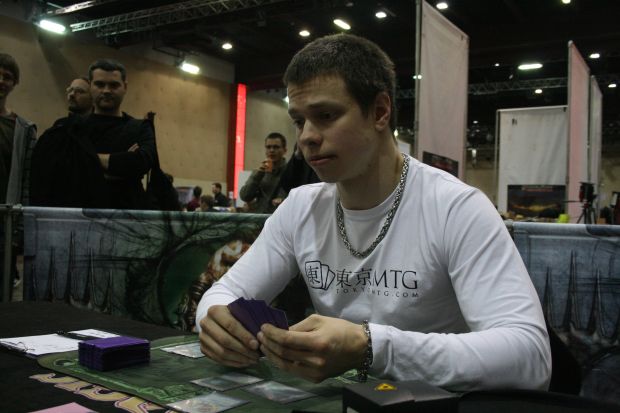 A couple of Brainstorms later, Schünemann made his first attempt at combo, but Rozza had drawn another Daze and a Spell Pierce, and countered with the latter. His Gitaxian Probe then revealed a Lion's Eye Diamond, Duress, Infernal Tutor, and Cabal Ritual in Schünemann's hand.

Next turn, Schünemann cast Cabal Ritual and, in response, sacrificed his third land, a Polluted Delta, for threshold. An interesting line of play, considering he still knew about the Daze in Rozza's hand, and Daze did indeed stop the Ritual. After this exchange, Schünemann took Rozza's second Daze with Duress, though, leaving his opponent completely defenseless.