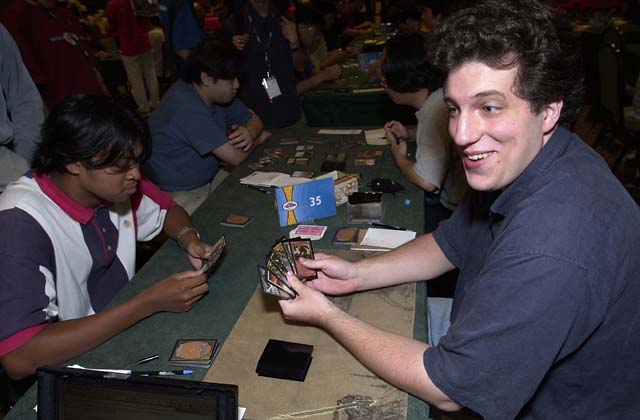 Morgan Ramanchandram entered this tournament as an unknown, having never attended a major international tournament before. But after this self-professed "luckiest player in Malaysia" made the Malaysian National Team this year, and he is ready to make a splash with his outgoing nature. Facing him in his second feature match was the always-friendly American expatriate Tobey Tamber, who qualified on ranking after recently winning GP Kaohsiung. Having drafted an "exotic" four or five color deck, the odds were on Tamber's more consistent deck to pull this match out, but as we all know, in Magic, luck doesn't answer to anyone!

We joined this match mid-game as Tamber returned his second Horned Kavu to his hand with a Fleetfoot Panther after it was blocked by and killed a Goblin Legionnaire with damage on the stack. The Horned Kavu then brought back the Fleetfoot Panther giving Tamber an invincible 3 /4 creature as he could perpetually bounce his two Kavu.

A lone Benalish trapper was holding off one of the Kavu, but Ramanchandram's position wasn't look too good as he played a Kavu Climber to draw a card. Tamber made things even more difficult by playing a Serpentine Kavu and giving it haste to attack for 7.

But all of Tamber's high quality large creatures looked a bit smaller after Ramanchandram played the large-butted Nemata, Grove Guardian that was able to provide endless blockers. Tamber chuckled as he drew Bloodfire Dwarf off the top to provide at least a bit of relief from a swarm of 1/1 Saprolings.

With Ramanchandram at 9 and slowly taking control, Tamber paused to re-analyze the situation and figure out a way to win. Unfortunately his deck didn't provide him with an answer as he just attacked in order to force some Saproling chump blocking so Ramanchandram was only able to net one fungus a turn.

Keeping the match light, Ramanchandram provided sound effects as he created his Saprolings while playing up to the amused crowd. Tamber went along with the fun, despite having his board position slowly erode. 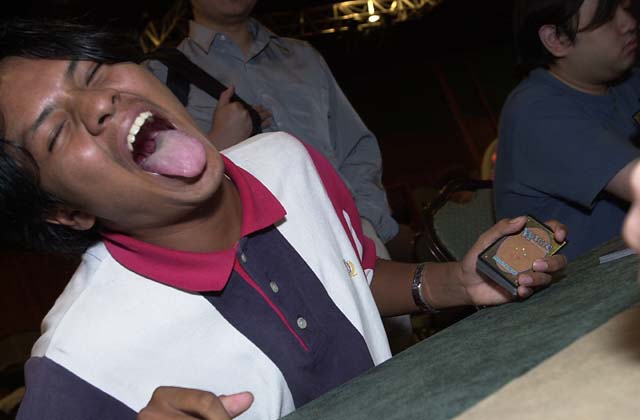 All of a sudden, with 12 land and four colors in play, Ramanchandram slapped down everyone's favorite 9/9 creature - Draco! Good-naturedly uttering a phrase not suitable for our younger readers, Tamber began contemplating out loud whether he had anything left that could get through a 9/9 with lots fungal support. Hoping to buy some time, Tamber used one of his pair of Armadillo Cloaks on the dragon, but Ramanchandram had a painful answer in Orim's Thunder as he "shot" the Cloak at the Bloodfire Dwarf.

With the dwarf gone, Tamber was able to play out the irrelevant Samite Pilgrim and Urborg Elf he was holding. As the 9/9 flier continued to make his acquaintance, Tamber conceded with a shake of his head.

Game two began slowly with the first creature played in game two was a Mirrorwood Treefolk on Tamber's side. Having only three colors of land in play on turn three, Ramanchandram was unable to do anything on turn four but discard Penumbra Bobcat as none of the lands were forests. The perils of playing 4-5 colors were finally beginning to show!

Tamber followed up the Treefolk with a Serpentine Kavu as Ramanchandram drew a fourth mana and played a very small Glimmering Angel. The Angel appeared even smaller as the Treefolk put on an Armadillo Cloak and Tamber's team swung for eight. The Serpentine Kavu returned to Tamber's hand to make way for a Horned Kavu, giving Tamber the option of attacking for 11 the following turn if Ramanchandram didn't do anything.

A Goblin Legionnaire gave Ramanchandram another answer to the 4 toughness attackers, but Tamber played a Legionnaire of his own to remove it and despite preventing two damage to himself, the combined 5 power of attackers was able to overwhelm Ramanchandram who was unable to ever find a forest.

Ramanchandram kept his opening hand of two land, Draco and Stratadon, this time with a forest. Tamber was forced to mulligan, though realistically, Ramanchandram already had virtually mulliganed by keeping an opening hand with Draco as he would have to quickly draw six land to be able to cast it! 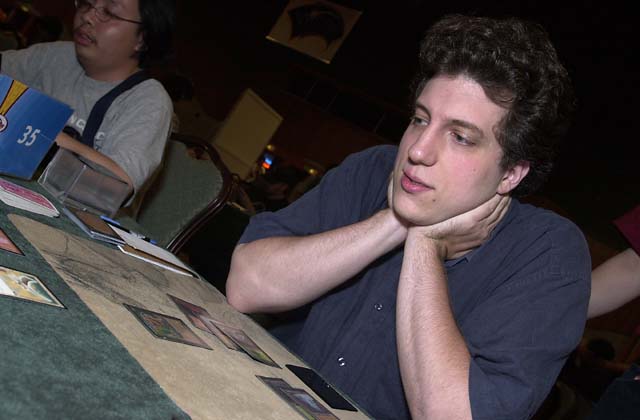 Drawing two land off the top in a row allowed Ramanchandram to play a Tundra Kavu on turn three. Tamber was not so lucky as he stalled at a Terminal Moraine and mountain. Drawing a forest, Tamber was only held back for a turn, but was unable to find a creature to block. Ramanchandram continued to draw and play a land every turn as he attacked with the Kavu and an Aurora Griffon. Tamber drew into Lay of the Land, allowing him to search out a plains so Squee could give his Kavu Aggressor a hug. But again Ramanchandram had the Orim's Thunder and the Aggressor perished to its own enchantment.

With the five land and Quirion Elf that he drew, combined with the Tundra Kavu's ability to make one of his lands an island, Ramanchandram played a turn seven Draco! Tamber was at a loss for how to deal with domain superstar, but attempted to rush a Cloaked Serpentine Kavu past it. Ramanchandram was not to be bluffed as he blocked and gave Tamber six life in exchange for two cards. By comparison, Reviving Dose began to look like a really good deal!

Keeping up the artifact insanity, Ramanchandram then played Stratadon for only six mana. Tamber played a Lashknife Barrier to search for an answer, but was unable to find anything while Ramanchandram continued to draw land having drawn nothing but land an elf for the entire game. Ironically, Tamber died with a Voice of All in hand that would have been able to stop any non-artifact creature, but was useless in this situation.