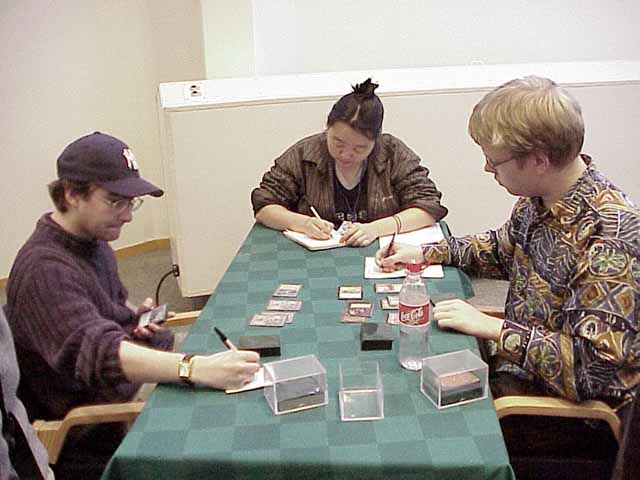 Two IRC regulars met in the fifth round of Grand Prix Helsinki. Tomi Walamies (Jelly on IRC) from Finland faced Tony Dobson (Dobson on IRC) at the feature match table. The Finn played a red, green and white kick-ass beatdown deck, while Tony dryly remarked that his deck was so bad that he needed every card he could get - so he chose to draw when he won the die roll.

Tomi started out by playing two lands, and then it was time to get some creatures on the table. He cast at turn three Kavu Scout, and then a turn four Glimmering Angel. Tony had a Mourning for the Scout, but quickly figured that it would look far better on the Angel instead, so he switched. He also played a Metathran Zombie.

But Tomi had answers. He summoned a Spirit Weaver, and then he Tribal Flamed the Zombie while Tony was tapped out - and suddenly, the Englishman found himself at eleven life. An Angel of Mercy brought him up to 14, and it also provided him with a blocker.

The Finn then figured it was time for some trample. He cast Kavu Titan with kicker, and Tony was forced to trade the Angel for the Kavu Scout. Tony also had a Repulse for a Ruham Djinn that came into play the following turn, and he also played a Zanam Djinn. But Tomi had another fattie in his deck, he dropped a Serpentine Kavu, activated it to attack, and Tony scooped.

The second game was even worse for the Englishman than the first had been. Both players played land only during the first two turns, but then Tomi's deck started making threats. He cast a Sparring Golem that he pumped up with an Armadillo Cloak, and Tony's Vodalian Zombie looked weak in comparison. It was also Shackled after attacking once, and the Golem took Tony down to 12 before it was Agonizing Demised. Tony also cast an Urborg Skeleton without kicker.

But once the one trampler was gone, Tomi figured he wanted another one and played Kavu Titan with kicker and then another fattie, a Crosis's Attendant. Tony used a Dismantling Blow to destroy the Shackles on his Zombie, drawing two cards in the process, and then he cast an Angel of Mercy. But Tomi had a Tribal Flames for the big flyer. He also had a second Armadillo Cloak for the Attendant - and suddenly, Tony found himself facing two 5/5 tramplers.

A prison Barricade with kicker and a Mourning on the Attendant gave Tony an extra turn to live, but the following attack took him down to one measly life. So when Tomi cast a Rith's Attendant as well, Tony scooped.