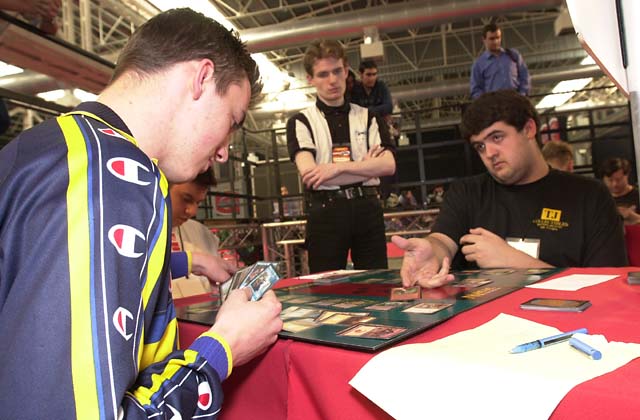 William "Baby Huey" Jensen, winner of the first Masters in New York, has been a powerful player on the Magic Pro Tour for several years now. Consistent and circumspect, Huey is a very graceful loser, though his wins are celebrated with a lot more fervor. As a result, Huey has a reputation for being loud; he wins a lot more than he loses.

Olivier is one half of the famous Ruel brothers from France. Sporting a whole string of Grand Prix and Team event successes, Olivier and Antoine have come to rival the OMS's in the "Magic family" stakes. These two players had met only once before their Barcelona encounter, and that was in the New York Masters. Needless to say Jensen won that match, and the tournament.

Olivier won the dice roll and decided to play. He made a second turn Fertile Ground and Prohibited Jensen's third turn Raging Kavu. He untapped and made a Kavu Chameleon, to which Jensen could only muster a Mirrorwood Treefolk with no white mana to activate its ability. The two traded blows with their creatures and Huey made a Slingshot Goblin as a creature to gate with his Horned Kavu. Ruel Harrowed in response to the Horned Kavu and Excluded it, leaving the Slingshot Goblin in play.

Olivier untapped and drew a whopping 5 cards off an Allied Strategies, before passing the turn. The Chameleon stayed home on defense, and when Huey made a Fires of Yavimaya on his turn, Olivier traded his creature for the enchantment. Olivier then Hobbled Jensen's Treefolk, looking to draw more cards and then Prohibited a Trailblazer, denying Huey the white mana he was looking for. 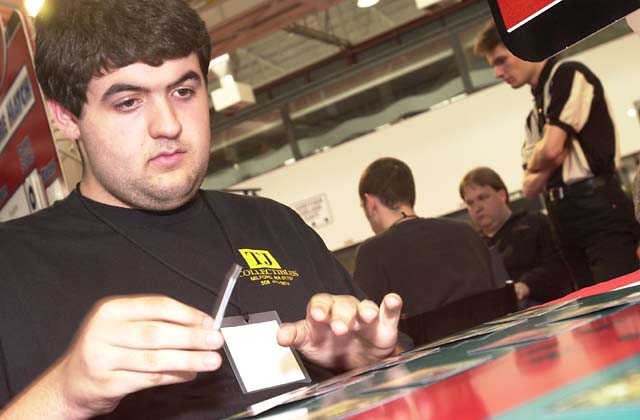 Next turn he cast a second Allied Strategies for 5, this raising a smirk from Huey, before making a Samite Elder, a bomb in this matchup. Huey again served with the Goblin taking Olivier's life total down to 14 and developed his side of the board with an Amphibious Kavu and a Pincer Spider. Olivier untapped with his hand of seven cards and cast a Llanowar Knight and a Steel Leaf Paladin to hold off any rush strategies Jensen may be able to manage. Jensen killed the Elder with an Exotic Curse and passed the turn after Olivier used its ability in response. On his next turn, Olivier attacked Jensen down to 12 with the Paladin, and played a Stone Kavu. Jensen just drew and said go.

Olivier's next turn yielded yet a third Allied Strategies, and after it resolved he started to chuckle to himself, muttering to his opponent that he was still going to lose, despite having drawn 17 extra cards. He tried to Primal Growth with one green floating, but had no lands left in his library and ended up burning for 1. Again Jensen drew and passed the turn. With only 4 cards left in his library, he untapped and used the Raise Dead ability of Darigaaz's Charm to recover the Elder. He cast it and passed the turn. Jensen Lightning Darted the Steel Leaf Paladin in end of turn step, and once he untapped Olivier expected to put his Elder in the bin, but Jensen's only answer was a Thornscape Battlemage, for which Olivier had a second Exclude. Two alpha strikes later and a few more creatures for defense, Olivier had managed to win.

"If I couldn't win with this draw, how could I ever win a game?" Olivier chuckled, while Huey muttered his agreement.

Huey looked very circumspect shuffling his deck for game 2, while Olivier calmly played with his sideboard before shuffling up to begin. Jensen elected to start, and played lands for four turns, one of which a Terminal Moraine, before making his Ancient Kavu. Olivier, again made his turn 2 Fertile Ground, this time though he had to cast a third turn Primal Growth having no lands to play, which he followed up with a Quirion Trailblazer. Jensen's follow up was much more impressive, however, with a Tahngarth in play on his very next turn. 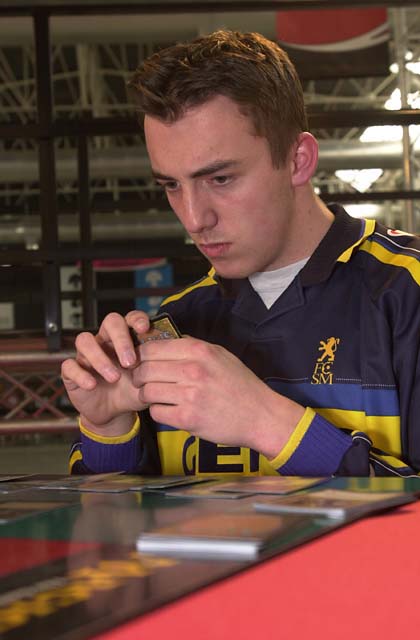 Olivier attacked with the Trailblazer, and after some consideration Jensen blocked. Olivier Giant Growthed his creature using Darigaaz's charm, and Tahngarth went in the bin. Jensen wasn't worried though, as he calmly untapped, made a Serpentine Kavu, gave it haste and attacked for 7, leaving Olivier on 10. Olivier raised his defenses with a Steel Leaf Paladin, gating his Trailblazer, but refused to block with it when Jensen attacked with only the Serpentine Kavu next turn. Oliver made some more creatures, 2 Llanowar Knights and the Trailblazer to hold off Jensen's creatures. This plan worked as all Jensen did was cast a Kavu Climber and a Thunderscape Familiar before passing the turn.

Olivier Hobbled the Serpentine Kavu and passed the turn right back. Jensen drew, and played Fires of Yavimaya before attacking with the Ancient Kavu. Olivier gang-blocked both creatures, but Jensen played Falling Timber with kicker and a Tribal Flames after combat to leave Olivier with only a Llanowar Knight and a Trailblazer, while Huey has a Kavu Climber and an Ancient Kavu for attacking purposes. Never let it be said that the French don't rip, as Olivier pulled his Ordered Migration for five to hold off the monsters. The next three turns he attacked with five power worth of flyers, making ground stalling creatures every turn until Jensen scooped.

Jensen, calm as ever, wished Olivier luck before leaving the table.