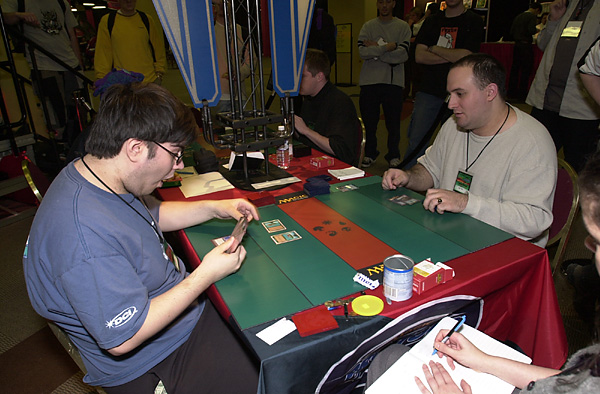 Former teammates Zvi Mowshowitz and Gary Wise found themselves paired head to head in this banter-filled feature match. In addition to both belonging to the now defunct Mogg Squad, both players competed in this year's Magic Invitational in Sydney, Australia. Mowshowitz, a 21 year old New Yorker and the father of Turbo Land, is a former member of the U.S. National Team and made the Top 8 at Pro Tour - New York '98. For this event, he worked with Team Kobra Kai members Adrian Sullivan, Seth Burn, Brian Kowal, Scott Johns, Brian Selden, and Jake Janoska. Gary Wise, a 27 year old from Toronto, Canada, is Co-Champion of Team Pro Tour - New York 2000, has a Worlds Top 8 to his credit, and is well known for his "limited skillz." He worked with some of the top European players to prepare for this event, although he says that their team doesn't formally have a name. "Just say that it was the top German players and the top English players who carried my sorry Canadian haunches." They must have done a good job, since Wise was undefeated with his blue/white control deck after four rounds, and was headed into another favorable matchup versus Mowshowitz's Fires of Yavimaya deck.

This game was all Wise. He won the coin flip and chose to play, had a smooth mana draw, and by turn five had a Story Circle: Green on the table with the mana to use it. Mowshowitz, meanwhile, had an excruciatingly slow start, doing nothing until turn four when he cast a Battery token. He cast several more green threats, but all were neutralized by the Story Circle. Mowshowitz finally came up with a threat that could inflict damage on turn seven, and it was a big one: Two-Headed Dragon. "That's some mighty unusual tech you've got there," Wise retorted, just before he cast a Story Circle: Red. Mowshowitz, knowing he was virtually locked at this point, said "Show me some Counterspells and I'll concede." Wise flopped down a hand with multiple Counters, and Mowshowitz scooped.

Both these players are known for their senses of humor, and Wise in particular for his table talk. The repartee came out in full force during sideboarding. "Hmmmm, what's poop and what's not?" Wise mused while fiddling with his deck. "You can quote me on that." Wise then accidentally dropped his deck into his lap, which started the following exchange:

After they settled down a bit, Mowshowitz chose to play, and opened up with another slow start without any Birds or Elves. However, Wise's draw was also slow, with his first two lands being Coastal Towers. Mowshowitz was able to cast a Jade Leech and use a Dust Bowl to destroy every source of white Wise played. A critical turn came when Wise cast Fact or Fiction, revealing Plains, Counterspell, Absorb, Wrath of God, and Accumulated Knowledge. Mowshowitz made one pile containing the lonely Plains, and one pile containing the four spells. "I don't think you have a Plains," he laughed. "I think you're right," Wise replied as he picked up the Plains. Wise never drew a second source of white, and, unable to Wrath, took four hits from the Jade Leech and died.

Game 3 was another brutally efficient draw for the blue/white control deck. Mowshowitz's first threat, a Jade Leech, was Wrathed away, and his next three spells were all Absorbed. By the time Wise Absorbed the third creature, he was at 23 life and Mowshowitz yelled "cut that out!" Mowshowitz was able to get in only one more attack with a Kavu Chameleon, before Wise Routed that into the graveyard to join Mowshowitz's other creatures. Zvi drew land for many turns while Wise drew card after card with Accumulated Knowledge and Fact or Fiction, and soon established Blinding Angel lock.