Round 5: Gabriel Nassif vs. David Brucker

Listening to Kai's rampage story.The theme for this round is Germany vs. French. On this table Nassif-Brucker and on the next Budde-Ruel (Olivier). David Brucker is the current European champion, storming out of nowhere in Amsterdam last year to take the continental crown. Nassif burst into the scene during the Year of the French reaching the finals at Team Pro Tour New York and Grand Prix London.

Things started of in a mysterious way, with three morphs. Nassif blocked one on the second attack - David flipped over a Craghorn - before playing a Caller of the Claw, followed by Berserk Murbobont. That was more than enough for David Brucker who threw Pinpoint Avalanche at it before playing Timberwatch Elf.

The Craghorn waltzed in the Red Zone and Nassif placed the token and the Called in front of it. David took the token down and played Treespring Lorian. The German's army was too much for the French to contain. Slowly he ran out of blockers and life to work with.

If on the first game Nassif was mana-flooded this time he was shaking his head by the third turn as he played Swamp after Swamp. Finally he found a Forest and used Vitality Charm to save his morph from another morph.

They both smiled as Nassif answered Timberwatch Elf with Timberwatch Elf. But Brucker had more than a simple to play: he had Anurid Murkdiver. The morph came in, the Murkdiver blocked and Gabriel Nassif used the stack to his advantage. He pumped his creature and in response to David pumping his he played a Caller of the Claw to make his pump effect bigger. 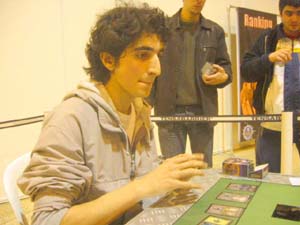 Nassif's game is not going according to plan.Tricks might be holding the table for the French but he cursed when Brucker played Enormous Baloth. The Caller took one for the team as David Brucker poured yet another creature on the table.

The next swing brought Nassif to eight and Pinpoint Avalanche took out his morphed Fallen Cleric. On the next swing Nassif fliped the remaining morph: Skinthinner. It turns out Brucker had used the Avalanche on the wrong morph. Out went the Enormous Baloth.

Seeking revenge, David Brucker used Erratic Explosion to take out the opposing Timberwatch Elf and played Canopy Crawler. Nassif stepped into his think tank. He had no nonland permanents and was two swings away from losing the round.

Finally he chose a plan. He played Needleshot Gourna and passed the turn. Brucker passed the turn as well. In came Treespring Lorian and suddenly Gabriel could once again breathe a sigh of relief. The table was balanced.

Brucker played a morph and a turn later flipped it: it was Imperial Hellkite.

Kai: "You are lucky he didn't search up Rorix!"

Fortunely for Nassif he hd Deathmark Prelate in the table and found Festering Goblin. The little Goblin brought down the Helkite and all was stable in the table once again. 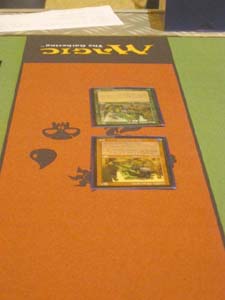 David Brucker is not a forgiving man.But the German was tired of all this trickery. Over the next two turns he played three extra creatures while Gabriel redid his math over, and over, and over again. He found another Zombie and took out Goblin Machinist with it.

Brucker sent his army in and five creature died in combat as Nassif slipped to six. The Prelate retaliated and Gabriel played Gempalm Polluter. Brucker sent in a morph, Nassif cringed and gang blocked.

Brucker revealed Patron of the Wild to pump the morph and flipped the blocked morph: the feared Battering Craghorn. The French lost both creatures. The pace was finally picking up as David Brucker steadily destroyed every attempt Gabriel Nassif built to slow things down.