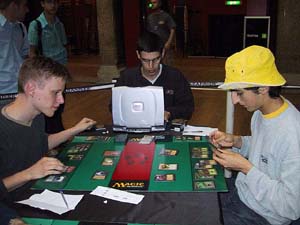 If there is one expression you often hear in European Magic it's certainly "good Dutch player". It somehow comes with the territory. If you are Dutch, and you play in premier events in Europe, you will play well. Victor is another of those players.

Across the table Gabriel Nassif is also a member of a larger portion of the European Magic: the new successful horde of players from France. They crowded
Pro Tour-Osaka in the wake of Farid's win in San Diego but somehow eclipsed in their own Pro Tour (Nice). Nassif lost to a "deity" named Kai Budde in the finals of Grand Prix-London last year.

Nassif probably wasn't too happy when he saw the cards in Victor's hands with his second turn Fiend: Phantom Centaur, Arrogant Wurm, Violent Eruption and Barbarian Bully. His eyebrows arched as he understood how hard this round would be. After some notes he took the Eruption. 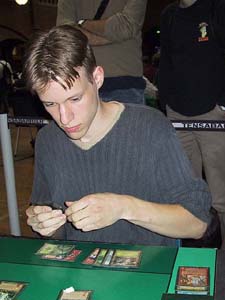 In came the Bully, followed by the Centaur as Gabriel dropped Whispering Shade and used Grizzly Fate. One of the bears jumped in front of Centaur. In came the Wurm.

The Frenchman braced for the pain when Broek pushed his whole crew in. He tried Second Thoughts but the Dutch had the Syncopate for it. That swing brought Nassif down to six.

On the next turn he needed a Sudden Strength to save his Shade while killing the Arrogant Wurm. Still he went down to one, against a Red deck. The flashbacked Grizzly Fate gave Nassif some extra blockers as he waltzed trying to stop the veritable flood of Green monsters Victor dropped at an alarming rate.

If the Dutch could somehow kill the Fiend to recover his Eruption, or draw another damage spell, the game would end. Still his attacks drove the bears to extinction forcing Gabriel Nassif to find other sacrificial lambs. The next charge did balance things a bit more as Victor killed three creatures but was left with only Nantuko Calmer.

For the first time in the whole game the Dutch had to stop to think. Finally he used Nostalgic Dreams to get his Phantom Centaur back. He couldn't cast the beast on the same turn, which made Nassif's following Earsplitting Rats a lot better.

Not the best Rats ever, but close. For a moment it looked like the Frenchman had drained the momentum for his opponent but Victor found another solution: Krosan Constrictor.

One turn later swampwalking finished what big bruisers had started.

After a mulligan, Nassif again had a second turn Fiend and again had reason to worry. Narcissism, Krosan Archer, Swelter and Brawn. He took the Red spell. Still shaking his head he played Cabal Torturer on the following turn.

Meanwhile the Dutch was busy setting shop: Krosan Archer, Narcissism and Arrogant Wurm. The best that Gabriel could do was play a second Torturer and Earsplitting Rats (losing Morbid Hunger while his opponent discarded a Forest). 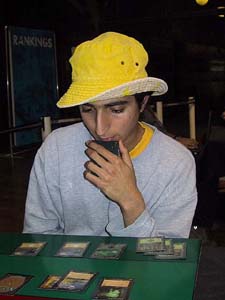 The green duo took trips to the red zone dropping Nassif to eight before he resigned himself to chump blocking. Seeing his opponent with five mana open Victor only sent the Archer, hoping to draw a potential Second Thoughts to this creature and not the Wurm.

So we set into a pattern: the Archers attacked, the Rats blocked, Torturer made Archers smaller, Victor pumped the Archers, Nassif discarded to regenerate the Rats. We played this for a few turns.

Finally Victor made his move: he played Exoskeletal Armor on the Wurm and sent both creatures in. Nassif didn't have Thoughts and his Rats blocked the Archers. The Wurm did enough damage to drop him to two.

On the next swing Gabriel tapped all his mana, scaring Victor van Den Broek for a second, but smiled and showed an irrelevant Sudden Strength.