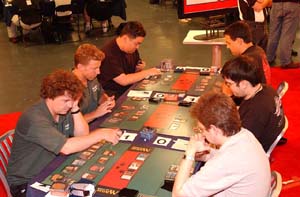 Game Empire vs. My Team Part 17

This match wasn't just a standard tangle between two undefeated teams. Nor was it merely the sort of star-studded extravaganza generally associated with the Pro Tour. No, this was a repeat of a practice match that happened just a week before. The light-hearted atmosphere that the players brought with them erased the seriousness that comes with play at this level.

Alan Comer had a mammoth threat ready for Alex Shvartsman: Jade Leech. Shvartsman recoiled in a mixture of mock surprise and genuine concern. Things worsened for him as Comer removed his tapper with Exotic Curse. Kavu Chameleon completed the tag-team. Shvartsman tried to make a game of it, playing a kicked Benalish Lancer and then Faerie Squadron, which got a giggle out of Comer.

"This is just rude, this is just the best of rude!", exclaimed Comer as he tapped eight mana. Down came a doubly-kicked Sunscape Battlemage that smashed the Squadron and refilled Comer's hand. Shvartsman turned to his teammates, saying "I don't think I'm gonna win this one."

Brian Selden was swarming Zvi Mowshowitz with plenty of three casting cost nasties. Zvi tried to stop it, first with Serpentine Kavu that met a Ghitu Fire, then with an unkicked Verdeloth, the Ancient. Selden had run out of gas, with just a Soul Burn in hand. He tried to wait out the three land he needed to burn Mowshowitz out, but was one turn short.

Comer had meanwhile dispatched Shvartsman with an outrageous 6/7 Emblazoned Golem. At the far end, Justin Gary and Terry Tsang were mired in the control mirror. Tsang was the recipient of early beats, but counteracted Gary's discard with a Benalish Heralds. The standoff had Tsang's Stormscape Apprentice and Cavern Harpy against Gary's Harpy and Urborg Drake, with Tsang far behind on life. 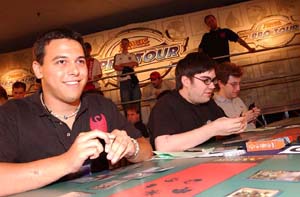 In Selden's game two he destroyed Mowshowitz's early game with a Bloodfire Infusion on his Hooded Kavu. He followed up with a pair of creatures to beat down. Mowshowitz matched him, and it was a race. Verdeloth got Maliced, but provided Saprolings to chump block, keeping Mowshowitz in the game.

Comer's creatures were significantly less fat in game two. He was under fire from Shvartsman's Zanam Djinn, taking two hits before locking it under his Thornscape Apprentice. Again he double-kicked his Sunscape Battlemage, placing it across from Shvartsman's fully unkicked version. This provided more than enough bodies to throw at Shvartsman, who was conspicuously without black mana. The first match was Game Empire's.

Gary went for the quick kill in his second game, leading with Vodalian Merchant and Vodalian Zombie. Agonizing Demise took care of Tsang's Razorfoot Griffin, and Urborg Drake showed up to further his problems. Tsang put a resistance with Living Airship and Shackles. Gary took the battle to a different plane with Duskwalker.

Just as this was going on, Mowshowitz had topdecked Darigaaz, the Igniter to stay in the game. He swung with it and activated its ability, the extra point of damage putting Selden to three. Mowshowitz then turned over the Magma Burst he had just drawn to take the second match for My Team Part 17.

And so it all came down to Tsang versus Gary. Tsang had taken a lot of damage, and chose to eat some more to wipe out Gary's hand with Hypnotic Cloud. Gary happily showed him his three lands. His Duskwalker hit again, and then drew a Cloud of his own. This one was much more successful, stealing Confound, Gerrard Capashen and Stormscape Battlemage. 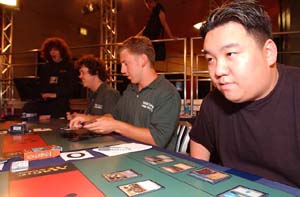 Still, Tsang wasn't out of gas. He played out Stormscape Apprentice for the Duskwalker and Benalish Heralds to refill his hand. The last Duskwalker hit put Tsang to four. Holding Recover and a land, Gary suicided his Vodalian Merchant into Tsang's defenses. The two extra cards he got to see were both lands. Tsang's air force started to swing, and it looked like they would be forced into game three.

Gary wasn't done yet. He Recoiled the Heralds and smashed with all his guys, knocking Tsang to one. Tsang came back fighting with Angel of Mercy. Two turns later, a kicked Jilt pushed through three more damage. Tsang's diminished forces meant he couldn't go on the offensive. Gary flashed the second Jilt to take the match for My Team Part 17, to the cheers and high-fives of his teammates.