Round 5: Gary Wise vs. Eric Froehlich 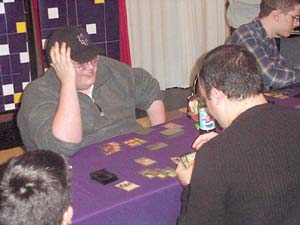 Gary arrived to the feature match area first, and began kvetching about Papa Froehlich (Eric's father) playing Brightstone Ritual during this very Grand Prix. He continued his complaining after Eric sat down to play. On and on Gary droned about Brightstone Ritual, well into the beginning of the first game. Eric, on the other hand, mumbled incoherently to himself all throughout the match. It was a striking contrast to listen to the contrast in volume levels between the two competitors.

Both players got the game off to a start with turn three morph creatures. Eric's was a Craghorn, as revealed on the fifth turn. Gary turned over his Spitting Gourna, setting the tone for the match.

Eric: "mumble mumble"
Gary: "Speak up! I can't hear you. (loudly) You need to project!"
Eric: "Maybe you should mumble more, Gary."

So while both players were doing their best impressions of various Dick Tracy villains, Wise enchanted his territory with a Centaur Glade. He held back his Gourna to stop Froehlich's still unrevealed morph creature, and began churning out centaurs. When he reached eight mana on turn eight, Eric scooped.

Game 1 finished rather quickly, so both Eric and Gary took the time to watch the match next to theirs while they were shuffling. Andrew Cuneo and Bob Maher were locked in a fierce battle, much the opposite of the smashing just administered in this match. 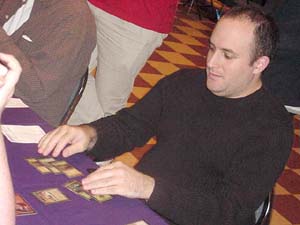 I'm not going to beat around the bush here: this game went even worse for Eric. Gary unmorphed Hystrodon on turn five, while Eric had nothing. Wise proceeded to draw card after card, filling his hand with the beats while trampling all over the place. Eric did manage to kill Gary's board about three turns into this massacre with a Slice and Dice, but Gary still had a full grip to Eric's three remaining cards. A couple of turns later, Gary's air force of Aven Soulgazers kicked in and ended the match.