Round 5: Gerry Thompson vs. Paul Rietzl 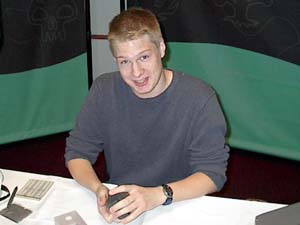 In a match of up-and-comers, we have Paul "Don't Call Me Little Darwin" Rietzl" versus Gerry "GerryT" Thompson. Both have posted excellent results this year and are expected to play a role in the future of American Magic. Rietzl has joined the legion of pros touting Affinity as the best deck in the format while Thompson is playing unadulterated hate for Paul's deck in the G/R deck some have touted "The Freshmaker." Unfortunately for GerryT, he ran out of hate this match before Rietzl ran out of threats.

For those who have never seen Rietzl in action, he's positively hyper-kinetic. This USC sophomore is constantly running off at the mouth, pondering his next play aloud, commenting about what his opponent's board looks like, what he could be holding in hand… basically anything under the sun. Gerry Thompson on the other hand oozes a laid-back sense of cool wherever he goes. He's quietly confident, joking around friends, but not usually the type to hog the spotlight.

"God, we always play each other, and I never beat you!" whined Rieztl. " We played at Nationals and in Seattle, and then at GP: Kansas City before that. This is ridiculous."

Game 1 started out furiously fast for Rieztl, with two Arcbound Workers, an Arcbound Ravager, a Frogmite, and three colors of mana. A Cranial Plating from Rietzl drew a flag for piling on, but Thompson merely shrugged and started blasting things with Magma Jets and Electrostatic Bolts. Rietzl had far too much gas though, as he managed to keep his Ravager alive through the timely sacrificing of artifacts, and squeezed just enough damage past a Molder Slug to make certain that Gerry never got another untap step.

"That was quick… must be a good hand there, Gerry."

"It's very good. You'll see why. You are so getting blown out this game," quipped Thompson.

The reason for Gerry's confidence quickly became clear, as he showed an opening hand of two Oxidize, Magma Jet, Viridian Shaman, and some land. By turn 3, Rietzl had no permanents on the board, while Gerry had a Shaman and three lands. Rietzle got back in the game with back-to-back Darksteel Citadels, giving him some lands that couldn't be destroyed, and started chanting a mantra of "Noslugnoslugnoslugnoslug" every time Gerry drew a card. Thompson just smiled and cast a turn 5 Arc-Slogger instead, prompting an outcry from Rieztl. "Dammit! I should have been saying 'No SLOG, No SLOG." 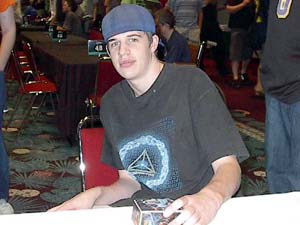 Paul drew his card, arched his eyebrows and said, "Ooo, I can win. I definitely can win this game." "This turn?" wondered Gerry. "Bah, Terror your Arc-Slogger." The game stalled as both players drew land after land, and Rietzl complained "My life for a Skullclamp!" The banned artifact was nowhere to be seen, but Paul managed to start drawing threats, while Gerry continued to draw lands and removal. Eventually the Affinity deck simply overran the G/R deck, as Thompson lost his one major threat and could no longer hold Rietzl's slowly amassing army at bay.

"Did you finally break the streak?" asked the spectating Brian Kibler.