he match looked to be entertaining as cut-ups Craig Krempels and Gerard Fabiano (from the adjacent Feature Match) were sitting next to each other, harassing everyone within earshot. Alex Majlaton, the name from the pairing most readers are less likely to recognize, even had a following in the peanut gallery. 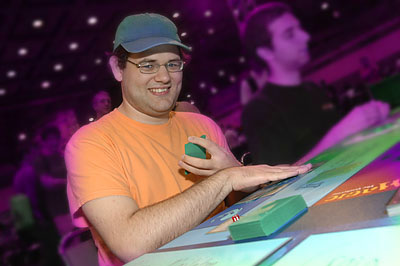 "Are you THE Alex Majlaton?" -Onlooker from sidelines

"Man, you have SUCH a following." -Krempels

Alex hails from Maryland and has a Grand Prix Top 8 from Charlotte while Craig Krempels is a Pro Tour mainstay and former U.S. Nationals Champion. Unfortunately for him this round, he was not a dice rolling champion and Alex elected to play first.

Majlaton led with Forest, Island into Suspending Giant Dustwasp while Krempels simply had Mountain, Mountain…go. The first actual creatures on the board were a morph for Majlaton and a Nessian Courser for Krempels and at the end of the fourth turn Majlaton had two Islands, two Forests, a morph, and a Gossamer Phantasm while Krempels had three Mountains, Forest, Nessian Courser, and Kavu Primarch (unkicked). The totals stood 20-17 in favor of Krempels after his Courser had bashed in.

Majlaton was quick to return an attack with Gossamer Phantasm, eying his Giant Dustwasp which was down to just one suspend counter. After playing a land Alex surveyed the board, but had no further plays and shipped the turn.

Krempels considered his opponent for a moment after drawing but quickly turned both of his Hill Giants sideways. Majlaton put his morph in front of the Nessian Courser, than tapped 2U to reveal Aquamorph Entity, which became a 1/5. The attack took him to 14, and it was Krempel's turn to pass with five mana up.

Alex made a Giant Dustwasp on his upkeep, but Krempels had a Riddle of Lightning. It wasn't to be, however, as Alex countered with Mystic Snake, threatening to wrest control of the game from Krempels who was still stuck on a single Forest.

Craig's mana woes continued as he failed to find another Forest, adding yet another Mountain to his board before entering his attack step. A Sulfourous Blast outside his mainphase wiped Majlaton's Mystic Snake and Gossamer Phantasm and when Craig got in his Primarch traded with the Aquamorph Entity. A Dead//Gone finished off the Dustwasp, and the game had dramatically turned away from Majlaton.

He tried to get back in by adding a Viscerid Deepwalker to the board, complete with four Islands. Krempels wasn't afraid, bashing back with Nessian Courser. The life totals stood 10-6 in favor of Krempels, but he watched helplessly as his Havenwood Wurm was Logic Knotted for one. That opened up space for him to resolve Ironclaw Buzzardiers, and the 2/2 flyer threatened to be lethal in the air very quickly.

Alex returned fire with his Deepwalker, putting Craig to 5, and when he passed after the attack without adding any blockers to the board, Krempels raised an eyebrow. Craig opted to get in with just his Buzzardiers in case of a trick, leaving his opponent at 1. When the former champ remembered to block on Majlaton's return attack, Alex scooped up his cards.

The antics didn't stop during sideboarding. Pointing at Fabiano's large stack of player tokens, Krempels pointed out they were all copies of Gerard's own card.

Both players avoided trips to Paris and echoed their Game 1 openers with a suspended Dustwasp for Majlaton and just two Mountains for Krempels. Neither had a turn three play, though Krempels did have a Forest for his manabase giving both players access to both of their colors.

Penumbra Spider was the first threat on the board, ready to save its owner, Majlaton, from a repeat of the ignominious fate of dying to Ironclaw Buzzardiers. The fourth turn was good for Krempels too, who added Centaur Omenreader to his side of the table.

The life totals stood 17-17. Majlaton had plenty of land and a Giant Dustwasp, Thornweald Archer, and Penumbra Spider with Utopia Vow. Krempels, on the other hand, had just the Centaur Omenreader and Bonesplitter Sliver with two fewer manasources than his opponent. On his turn he attempted to Flowstone Embrace the Thornweald Archer, which drew a pause from Alex. Finally he allowed it to resolve, and Krempels bashed for 7 with his Bonesplitter Sliver and Omenreader.

Alex had Spin into Myth for the Omenreader, ensuring Craig would have to pay retail for any creatures he intended to summon post-combat, but took 4 from the Sliver, leaving him at 13. Craig had no more plays, but after untapping and drawing, Majlaton had a bit of a doozy: Harmonize. The three additional cards gave him lots of gas, but he only had four mana available and looked to be saving much of it for Logic Knot. An end-of-turn Viashino Bladescout from Craig was allowed to resolve and after a Krempels attack the life totals were 7-14 in his favor. His post-combat Citanul Woodreaders with kicker, however, was countered and Alex even made sure to pay two mana for X despite the fact Craig had no lands untapped. With one card in hand, it WAS possible he had Simian Spirit Guide.

Down came the gas as Majlaton dropped Nessian Courser and Ana Battlemage acing the remaining card in Krempel's hand (Thallid Shell Dweller). The game looked to be headed in Alex's favor, but Krempels had a bomb off the top: Stonebrow, Krosan Hero!

Alex didn't like that, and kept his creatures back to chump block. Craig was happy to oblige, taking the two-for-one, then added a second bomb: a Harmonize of his own! Majlaton's follow up was a second Penumbra Spider, which earned a sarcastic guffaw from Krempels, who added a Fury Sliver to his forces. The following turn, after no answer from Alex, the Sliver and Bladescout bashed in, leaving Majlaton at a precarious 5 life. Craig's Scarwood Treefolk, however, met its end at the hands of a Mystic Snake coming into play.

Alex added a morph then passed the turn to Craig who went into the tank for a while before pushing both his creatures into the red zone. Majlaton put the Penumbra Spider token created from his original dying in front of the 2/1 Bladescout and his mystery morph and Mystic Snake in front of the Fury Sliver. Craig killed the Mystic Snake with first strike and assigned one damage to the morph. Alex flipped the 2/2 and revealed Aquamorph Entity, but declared it a 5/1. 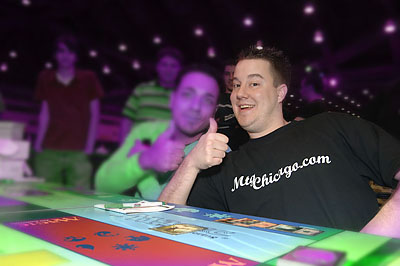 Alex glanced at the card, then grimaced as he realized his mistake, but placed the creature in the graveyard. A combat phase Sulfurous Blast from Krempels cleared Alex's board, and at the end of the turn things stood 9-3 in favor of Krempels.

A Sprout Swarm from Majlaton threatened to take control of the game back from Craig, but Krempels had a trump in Havenwood Wurm. Upset he didn't have the counterspell, Alex rolled his eyes, drew his card for the turn, verified he didn't have the mana necessary to make seven tokens to block and conceded.

After the match, Alex turned to his supporter in the peanut gallery and, with a laugh said "Great! I can't wait to tell my friends I lost to Havenwood Wurm in a Feature Match!"