n this Round 5 battle of past Pro Tour winner Shuu Komuro and past World Champion Julien Nuijten, it was Nuijten who won the die roll and was able to start. He is one of many pros running mono-red today, in reaction to the white weenie decks that were much hailed as being the big deck in the format. His opponent, Shuu Komuro, had a deck all about gaining card advantage through big spells like Damnation, then winning with big beaters like Bogardan Hellkite. 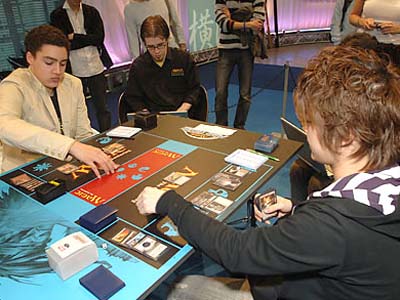 Julien Nuijten and Shuu Komuro are no strangers to the Feature Match area.

When Komuro played a Swamp on turn one, Julien knew that he didn't have his easiest matchup, but nonetheless, his start was a good one, with a turn-two Keldon Marauders, who managed to do their full potential of 5 damage over the opening turns.

Shuu's first creature was an end-of-turn Sulfur Elemental, which was matched shortly after the combat step by one from Julien. This was hit by Sudden Death, to which the Dutchie passed. In the same way that keeping two islands up always smelt of Counterspell back in the days where it could, at this Pro Tour, when the red decks hold up 3 mana, it tends to mean an end-of-turn Elemental.

This duly arrived, but on his turn Shuu had held back with his, sensing it might be on the way. Nuijten had a Dead to kill the 3/2 though, and ran in to take Komuro to 12. He had a Magus of the Scroll to follow up with, but little to deal with an Aeon Chronicler that unsuspended for Shuu the following turn.

Luckily for Julien, Shuu was on the back foot, and after attacking with the Chronicler, Komuro had to defensively Damnation. When Browbeat was played the following turn, it even drew Julien three cards-something of a rarity.

Unfortunately for Nuijten, he was left in the awkward position of being attacked by Phyrexian Totem without much in the way of responses, taking him down in hefty chunks to a scary 2 life. Julien tried for a Fiery Temper to the face but was hit by a Bogardan Hellkite in response, which sealed the first game.

For turn one of Game 2, Julien had a Rift Bolt to suspend, which was followed up by Keldon Marauders-the most aggressive of starts. Shuu simply had Plague Sliver. Julien was facing a clock now, but he had his opponent down pretty low and had an Avalanche Riders to both take out Molten Slagheap (leaving just a pair of Swamps and a Prismatic Lens) and to potentially block if the 5 points a turn looked concerning. 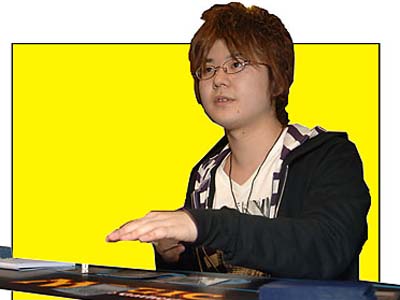 'These aren't the cards you're looking for.'

Before attacking, Shuu played a Psychotic Episode, looking to kit something good and get some more information. He saw a Disintegrate on top of Nuijten's deck and another Avalanche Rider's in his opponent's hand, along with a pair of land. After a little thought, he put the Riders on the bottom and elected not to attack. Nuijten chose to pay echo, drew, played a land, and passed.

Shuu dropped to 10 in his upkeep, but this soon became 12 as he used Tendrils of Corruption to clear a path for his attack with Plague Sliver. The race was on.

Julien drew, played another land, and pointed a Disintegrate at Shuu to take him to lower. Another Disintegrate the following turn made that just 1, as low as it could get. Plague Sliver finished it, and it was on to game 3.

Julien's opening seven for the third game was 3 Mountain, 2 Sulfur Elemental, 2 Eron the Relentless. After much consideration, he kept.

Shuu had a Terramorphic Expanse to begin, and Julien hadn't drawn any gas before turn three with which to improve his position. Shuu, meanwhile, had a Shadowmage Infiltrator, and was on the attack. He followed it up with a second, which was responded to by Sulfur Elemental #1. Both Johnny Magics ran in the following turn, giving Shuu a mighty grip of cards. He found Urborg, Tomb of Yawgmoth, which made all of his Tendrils of Corruption that much scarier. When he passed, Sulfur Elemental #2 came out to play, only to be swiftly sent home by the aforementioned removal spell.

Julien did have Eron the Relentless with which to strike back though, and took Shuu to 14 with his big attacks. Komuro had a neat play to follow up with though. Slightly short on mana after his attacks to do things the easy way, Shuu got into his discard step with 8 cards in hand. He discarded Pychotic Episode in his discard step, paid its madness cost, then responded to it with Tendrils of Corruption to kill Eron the Relentless, and take himself back up to 20 life. Julien slumped a little in his chair.

He played an Avalanche Riders the following turn, and, after a little thought, blew up Komuro's Island. All Komuro had for his turn was a pair of attacks, and the discard of a Damnation after playing a land. Julien did not pay echo, choosing instead to replace his Avalanche Riders with a new one. His Sulfur Elemental was killed in response. 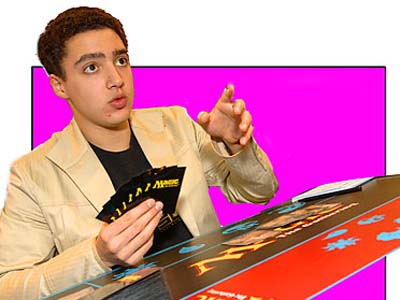 'I find your lack of faith disturbing.'

For his turn, Shuu had a Plague Sliver, which was enough to convince Nuijten not to pay the echo on his Riders. Instead, he used Browbeat to draw three cards and passed the turn with four mana up.

Shuu's attacks took Julien to 7 life, and Shuu followed up with Void, which was met with no responses, and hit the Disintegrate in Julien's hand, leaving a Mountain, Blood Knight and Fiery Temper. At the end of turn, Julien played his remaining burn spell targeting Shuu, clearly hoping to draw some big burn off the top. This did not happen though, and the only spell on his turn was a Bogardan Hellkite at the end of turn from Komuro, which sealed the deal.