rian Kibler and David Ochoa both have a long history, both in their Magic accomplishments as well as working together as teammates. While Kibler is a Hall of Fame member with two Pro Tour victories, Ochoa earned his first Pro Tour Top 8 finish at Pro Tour Return to Ravnica last season.

And it was the second time that both players made an appearance on the leaderboard as one of the top 16 players of the season, earning themselves the right to play in the 2013 Magic World Championship on their Pro Points earned after competing in last year's Players Championship.

The two players also tested extensively into the hours of last night with ChannelFireball teammates Josh Utter-Leyton and Eric Froehlich. Even in the final 24 hours before the start of the 2013 Magic World Championship, their deck choices radically changed. Ochoa's Jund deck gained access to main board Lifebane Zombies, expecting a field of Jund to prey upon.

"One of the problems that Jund had before was that its curve was too high, and you didn't start two-for-oning them until later," Ochoa explained. "Lifebane Zombie is good in the mirror for their Thragtusks and Huntmasters. It's good for being able to take away a creature that would get its owner value just by playing it." 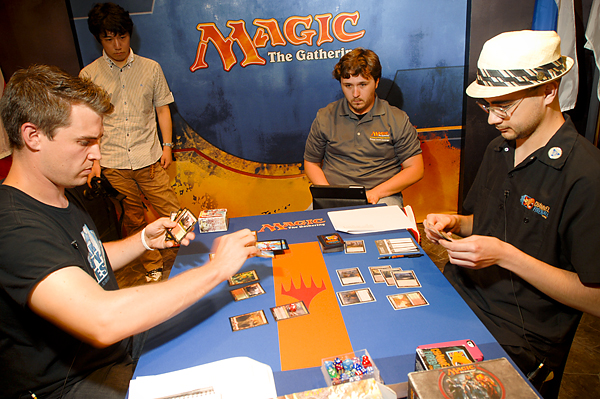 Friends and teammates, both Hall of Famer Brian Kibler and Pro Tour Return to Ravnica Top 8 competitor David Ochoa tested with their other teammates, Josh Utter-Leyton and Eric Froehlich, into the last hours before the tournament began.

Kibler's preferred deck of choice, Domri Gruul, had to adapt to the existence of the 3/1 creature possibly being in the other competitor's Jund decks as well, as they could have also reached the same conclusion as his teammates. Instead of embracing his love for Predator Ooze, a card that was originally in the list, he had to change.

"I needed to be faster," Kibler said.

And with that, the slower, more vulnerable to Lifebane Zombie creatures went out in favor of Strangleroot Geists and, perhaps more importantly, Hellriders. If there was one way to become faster, it definitely can come from casting the powerful four mana red devil.

While the teammates helped each other make last minute tweaks in order to give each other the best possible chance going into today, it did come with a cost. Kibler's preference for casting red-green planeswalkers led him to a concoction that was potentially well positioned against his teammates. That said, the Lifebane Zombies could still do work, and since both players had familiarity with each others' decks that goes past simply knowing their lists, the game was sure to have some interesting points of interaction.

As the two teammates sat down, Kibler couldn't help but notice that two of the few non Jund non blue-white-red players, Willy Edel and Craig Wescoe, got matched up against each other in the the fifth round. "Look at all of these honest creature decks battling against each other!" Kibler said.

Ochoa looked over his hand and opted to mulligan. Kibler, in faster fashion, took a good look and replied, "I'm going to join you." Ochoa sent his second hand back for me. "This time, I'm not going to join you," Kibler replied.

"You really should," Ochoa said. It's a lovely place this time of year."

Unfortunately, the first game never really got off the ground after that, as Kibler's curve of creatures quickly sent Ochoa to his sideboard after his five-card hand denied him green mana to do anything. 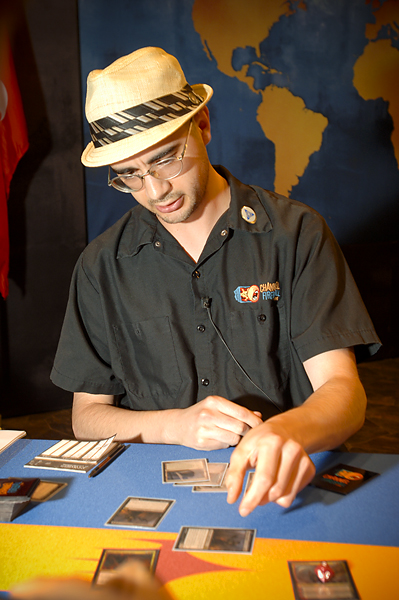 The second game offered more action, as Elvish Mystic suffered a Tragic Slip from Ochoa and kept Kibler off of his favorite planeswalker. Ochoa even had Lifebane Zombie to follow, and it proceeded to hit...

...well, nothing. Instead, it revealed two Mizzium Mortars, two Domri Rades, Stomping Ground, and Mountain. Kibler proceeded to untap and deploy Domri, which immediately started drawing Kibler creatures such as Ghor-Clan Rampager and Hellrider, the former being exiled by a second Lifebane Zombie from Ochoa.

However, Kibler was on a much different plan. His Mizzum Mortars and Domris gave him an edge in the late game, and he played as such. Both players continued to put lands into play, Ochoa curving out to Thragtusk, and Kibler playing a fifth land to re-cast Domri after losing his first one, followed by his first Mizzium Mortars to destroy Thragtusk, leaving a 3/3 in its wake to fight against Kibler's in-play Ghor-Clan Rampager from the previous turn.

Dreadbore from Ochoa cleared away the the Rampager, and an untapped land let Ochoa deal 6 to Kibler (dropping him to 11) while destroying Domri, thanks in large part to the Kessig Wolf Run that gave his 3/3 beast 4 power to dispose of the planeswalker. However, the second Mizzium Mortars reached critical mass with an overload on the next turn, taking out Ochoa's team. While Ochoa had Putrefy to take out Kibler's follow-up Hellrider, he was out of cards, and Kibler's second Hellrider and Arbor Elf gave him the advantage. Attacks dropped Ochoa to 13. 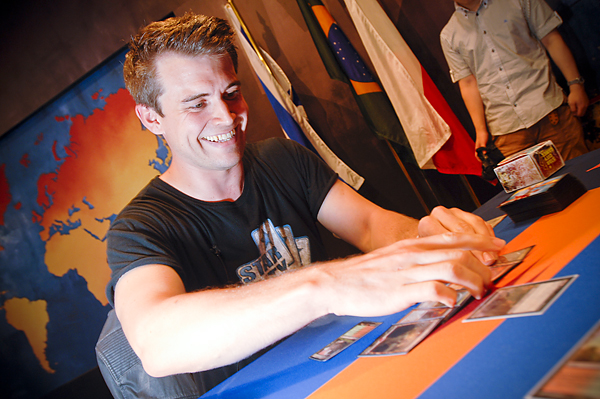 That became 15 when Ochoa found Huntmaster of the Fells waiting on top. He passed with four open for Kessig Wolf Run. Kibler sought to go over the top on that with Thundermaw Hellkite, attacking in with it and dropping Ochoa to 9. Despite the tight play from both pros, a single top-deck could decide the game for either player, but for Kibler, the right draw would decide the match immediately.

Ochoa found no Bonfire of the Damned waiting for him, but he still had a play. He sent in his wolf, forcing Kibler to block with Arbor Elf. Kessig Wolf Run let him punch through the elf and into Kibler's life total, dropping him to 5. He passed, transforming the Huntmaster into Ravager of the Fells, dropping to Kibler to 3...

...before Ochoa proceeded to lose to Kibler's drawn Hellrider, which gave the Dragonmaster and Hall of Famer more than enough damage to wrap up the match.