Round 5: I Like Doo Da Cha Cha vs. Zabuton Nemonaut

Zabuton Nemonaut is 2000 Team Pro Tour Champions Potato Nation minus Scott Johns, plus Eugene Harvey. Needless to say, they're contenders to do well this weekend. Mike Turian has long been considered a Team Rochester specialist, and Wise and Harvey are great players who are even better at Limited. So far, they've done very well, coming into this round with a perfect 4-0 record. This round they face Canadians Terry Tsang, Jason Adams, and Michael Gurney. Tsang is a former Canadian National Champion, and Gurney has a Limited Pro Tour Top 8 under his belt. 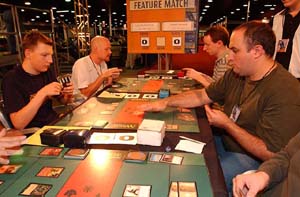 Adams had Lightning Rift, then played Stonewood Invoker and a morph. The Rift took down Wise's threats, until Adams started to run out of ammo. Wise summoned Vengeful Dead and a morph, and Adams played Barkhide Mauler instead of cycling it. Seizing the opportunity, Wise put Clutch of Undeath on the Dead to make it a much bigger threat and take it well out of Rift range. Both creatures attacked, and the morph flipped over to reveal Charging Slateback, forcing a trade with the Mauler. Just as Wise started to stabilize, Adams played a Dragon Roost, which took care of the rest.

Tsang had mana problems in the first game, only getting his third land when Turian already had five. Dragonstalker, Ascending Aven, and Shoreline Ranger all attacked Tsang from the air, ending the game in short order.

Gurney had a turn 2 Silver Knight against Harvey's green-red deck and followed up with Battlefield Medic, which died to Shock. Wirewood Elf and Savage came out soon after, while Gurney continued to build his defense with Akroma's Devoted. Harvey played Avarax and began to draw cards off the Savage, and Gurney summoned Dive Bomber. He continued to gain an advantage over the game until Harvey played Starstorm, clearing the board of everything except Silver Knight, which was able to finish the job regardless.

Game 2 went better for Tsang, as he was able to draw lands and actually put up a fight. He had a few small creatures on the ground such as Goblin Turncoat, Shepard of Rot, and Vengeful Dead, but couldn't handle Turian's fliers, which included a Dragonstalker enchanted with Dragon Scales. A few turns later, Turian won the match.

Once again, Adams had a second turn Lightning Rift, and used it to deal with Wise's threats. Macetail Hystrodon provided the pressure necessary to keep Wise reeling, never giving him the chance to keep up. This gave Adams the win, leaving the decision of the match between Harvey and Gurney. 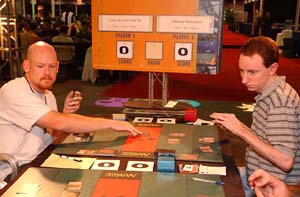 Gurney started game 2 with Battlefield Medic, and Harvey played a morph. Mistform Wall provided Gurney with some defense; Harvey summoned Goblin Clearcutter. Crown of Awe enchanted the Medic. Harvey followed up with Wirewood Savage. Akroma's Devoted provided even more toughness on the ground, but Goblin Clearcutter used a Forest to bring out a quicker Wirewood Guardian, then sacrificed another Forest to summon Chartooth Cougar and draw a card off the Savage. With the ground crowded up, Aven Soulgazer headed for the air, but Harvey brought out Wellwisher to keep the current net life difference every turn at zero.

Dive Bomber threatened to change that, but Harvey played two more elves to keep it even. Gurney played a pair of Daunting Defenders, making any attack unfavorable for Harvey. The fliers and Wellwisher kept the game even with a 5 life gained/5 damage dealt exchange every turn, as both players waited to draw a card that could break the stalemate. Gurney found one in Crowd Favorites, and Harvey Shocked the Dive Bomber. He tried to win with Wave of Indifference hoping Gurney wouldn't see the out, which he did, sacrificing Crown of Awe in response to fizzle it. Gurney attacked with the Soulgazer and Zealous Inquisitor, and Harvey sent most of his monsters to block the Inquisitor and take it down. This meant losing Wellwisher to damage redirection, but dealt with the threat. 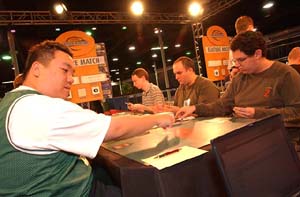 With the Wellwisher gone, Harvey had to make a move, and had to do it soon. He attacked and played a massive Starstorm, wiping every creature off the board. This left him with no cards in hand, and Gurney drew a morph, which was played and enchanted with Dragon Scales. Harvey summoned Avarax, and took a hit from the Scaled morph. He untapped and attacked, and Gurney blocked. The morph was Wingbeat Warrior and could flip over to first strike kill the Avarax, which Harvey didn't know. Regardless, he used Accelerated Growth to help his Beast survive combat, clearing the way for a huge Avarax attack on the following turn. Needing to draw something badly, Gurney ripped Silver Knight off the top, getting a laugh of disbelief out of Wise. Both players counted their decks, and Harvey had three cards left to Gurney's nine.

He played Goblin Clearcutter, and on the following turn a cycled Choking Tethers prevented Harvey from getting through for damage with an attack. Snarling Undorak followed, putting a significant threat on the board, but time was running out. Gurney played Battlefield Medic and a morph, and Harvey used Scattershot on end step to try to kill both--Gurney responded with Inspirit to keep his morph alive. It blocked and flipped over to reveal Ascending Aven, which traded with the Clearcutter. Commando Raid helped the Undorak deal with the Silver Knight, leaving Gurney with no creatures. Venomspout Brackus made Harvey's board position even better, but Gurney wasn't finished.

He ripped Akroma, and summoned her after using Frozen Solid to deal with the Avarax. A moment later, he went through his graveyard and realized he had forgotten the Dragon Scales. The Brackus was pumped enough to kill Akroma, and Harvey played another Beast. Gurney was out of resources, and conceded.