Round 5: It's Been a Long Time

"It's been a long time since I've seen you. PT–Barcelona?" Kai Budde said to his opponent as they sat down for their fifth round feature match. Both were undefeated at 4-0, and it marked a return of sorts for Budde. The German Juggernaut is the most successful Magic player of all time, with more Pro Tour titles than any other player. That honor made him an easy inclusion to the Pro Tour Hall of Fame. Ukrainian Yuri Kolomeyko is no stranger to the limelight of the Pro Tour, having made Top 8 himself as well as serving as a regular member of the gravy train for years.

Steppe Lynx led the way for Budde, who had managed his undefeated record playing White Weenie of all things. Kolomeyko made short work of the 0/1, burning it to a crisp with Lightning Bolt but he had only a sarcastic grunt of a laugh as Budde reloaded with two more copies of the Lynx on his second turn. Yuri cast Keldon Marauders to answer, dinging Budde for 1 on the way. 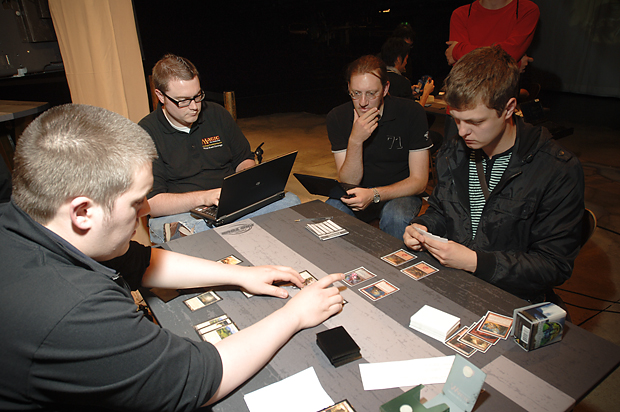 Kai Budde and Yuri Kolomeyko under the bright lights of the arena.

The Cats looked far less intimidating, however, as the German superstar revealed that he had no third land, simply drawing for his turn and passing. That put initiative back to the Ukrainian side of the battlefield, and Kolomeyko took advantage by casting Goblin Guide and attacking with both of his creatures. Budde took the damage, falling to 14, and picked up a free land from the Guide in the process. After combat a second Keldon Marauders joined Yuri's team.

Knight of the White Orchid hit for Kai, indicating that perhaps he hadn't missed a land drop at all. By skipping a land drop, Kai was able to fetch up a Plains with the 2/2 Knight, turning the twin copies of Steppe Lynx into 2/3s. A Flagstones of Trokair for the turn made the creatures 4/5s, and with his trademark shrug of indifference, Kai sent the team sideways. That made the score 13-10 in the German's favor, and he sat back with his Knight of the White Orchid, waiting for the ensuing attack from his opponent.

Yuri obliged, sending both his remaining Keldon Marauders and Goblin Guide sideways. Kai seemed happy about the attack, blocking Goblin Guide and falling to 9. Post-combat, Kolomeyko started casting spells. First a Lightning Bolt, targeting his opponent. Then, a second copy of the instant, again targeting Kai. Budde shrugged, and when Shard Volley was revealed to deal the final 3 he said, nonchalantly, "That's 9 damage I guess?" before picking up his sideboard.

"White sleeves are nice," Kai opined to his opponent while shuffling his deck. "Black ones heat up from the lights." It was a true fact, especially considering the unusually bright (and hot) power of the lamps lighting the arena at Pro Tour–Amsterdam.

The German player started off on the play and opened on Burrenton Forge-Tender, a powerful creature against Yuri Kolomeyko's burn deck. The match-up was a bit surreal—Burn versus White Weenie, Budde versus Kolomeyko; it seemed as though it were actually 1998. Mark of Asylum hit for the White Weenie side of the battlefield, shutting off any hopes Kolomeyko had of damaging his opponent's creatures outside of the red zone. 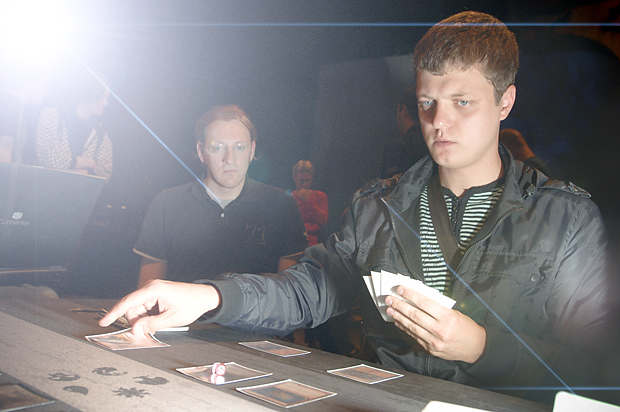 Those white sleeves are classy.

Figure of Destiny, then Goblin Guide allowed Yuri to attack for 2 though the combat step forced him to pump his Figure to keep it from dying to a Forge-Tender block and gave his opponent a free Arid Mesa via Goblin Guide. Kai fired right back with a Student of Warfare and a Knight of the White Orchid. The formidable team meant Yuri had to keep his creatures back, stuck on two mana, and could only suspend a Rift Bolt. Honor of the Pure made things worse for Yuri as it grew his opponent's army, and Budde leveled the Student of Warfare to make it effectively a 4/4 first striker.

Hoping to burn his way out of trouble, Kolomeyko sent a Lightning Bolt and his Rift Bolt at Kai, dropping his opponent to 11. But the Ukrainian stayed stuck on two lands and found himself facing an attack from both Knight of the White Orchid and the Student. Incinerate took Budde to 8, and Yuri found Scalding Tarn to get himself to three mana. Celestial Purge from Kai exiled Figure of Destiny and Kai had enough mana to level his Student to ultimate and attack for lethal.

"Too bad," Kai remarked while shuffling for the third game. "I should have won the first game. I always assume everyone is running the same list as our testing." His team's Burn deck didn't feature Shard Volley, and had he played correctly in the first game he would likely have survived and gone on to win. That would have meant he hadn't dropped a game through the first five rounds of Standard action, but instead he found himself shuffling up for the third game, still very much capable of walking away from the match with a loss.

Burrenton Forge-Tender again started the game off for Kai Budde, who raised an eyebrow as his opponent opened on Mountain before passing the turn with no play. That meant the 1/1 creature with protection from red was the first nonland permanent on the battlefield. Two mana went by and Yuri didn't have a permanent, but when Kai attacked him for 1 and passed, Kolomeyko fired off an Incinerate at his opponent's head.

Keldon Marauders finally showed up for Yuri, dropping his opponent to 16. Budde cast Spectral Procession and passed, but when Kolomeyko cast Volcanic Fallout, he opted to sacrifice his Forge-Tender to prevent the damage the spell would deal. That let him keep his 1/1 Spirits on the battlefield, and he used one to chump an attack from the Marauders. 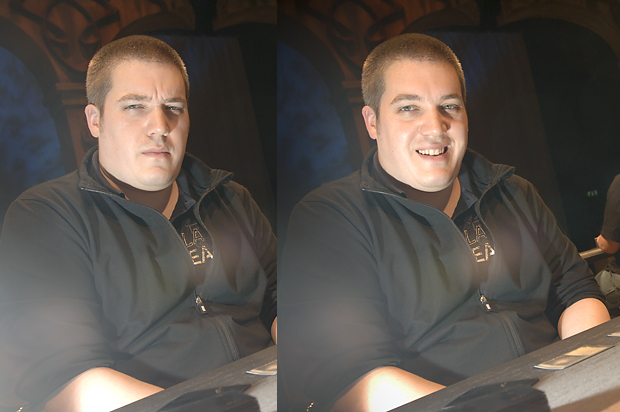 The many faces of Kai Budde—all two of them.

Ranger of Eos hit the battlefield, fetching up two copies of Burrenton Forge-Tender. The combo was quite powerful against Kolomeyko, but having whittled his opponent down to 15 Yuri certainly had the potential to kill out of nowhere with a plethora of direct damage. The 15 became 12 via Searing Blaze, which took out Ranger of Eos, and a suspended Rift Bolt threatened to make it 9. Kai cast his Forge-Tenders as well as a Student of Warfare, which he leveled twice.

Yuri allowed his Rift Bolt to come off suspend, and targeted his opponent. That put the score 15-9 in his favor, but when Kai verified his opponent was indeed at 15, it sounded like Yuri might be dead to some sort of surprise from Budde's White Weenie deck. Instead the German dropped his opponent to 8 with his attack and cast a second Ranger of Eos. The 3/2 picked up another Burrenton Forge-Tender and Kolomeyko stopped the Hall of Famer. Unable to beat three copies of the 1/1 in light of the army of white creatures starting him down across the table, Kolomeyko conceded.

1 Path to Exile 4 Brave the Elements

3 Ranger of Eos 2 Leyline of Sanctity